How to Make Sure Your Employees Keep It In Their Pants 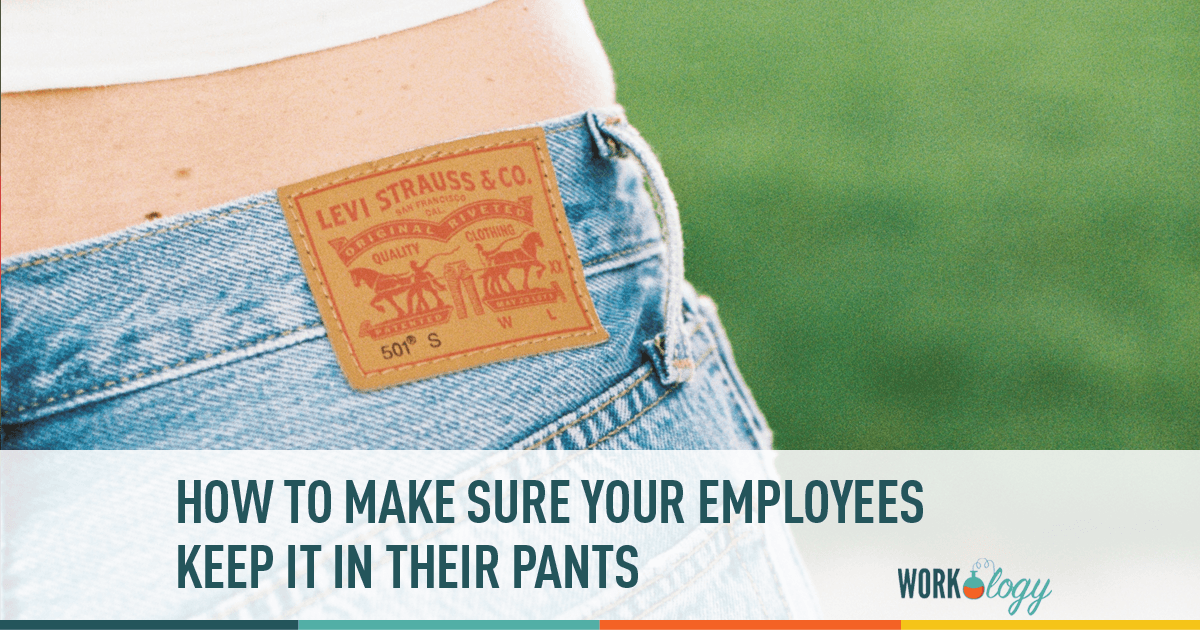 In honor of the recently passed Valentine’s Day, I’d like to talk a little bit about a salacious (and who doesn’t love salacious?!?) case that recently wrapped up in New York City involving sex, alcohol, sexual harassment, sex discrimination and sex (I know I mentioned sex twice, but I just wanted to make doubly sure you keep reading past the first paragraph).

Fresh out of law school Alexandria Marchuk was hired by litigation boutique law firm Faruqi & Faruqi, and worked under partner Juan Monteverde. Marchuk alleges that on numerous occasions, Monteverde got drunk, made inappropriate comments to her, and inappropriately touched her. She further alleges that she complained to another partner, who told her not to report the harassment, which cemented her fear that reporting would torpedo her career with the firm.

The final straw occurred during and after the firm’s annual Christmas party. Monteverde allegedly told Marchuk that he was “testing” her during the year and that she failed, which would ensure she would not only be denied a bonus but might no longer have a future with the firm. Marchuk claimed that, in an effort to repair her relationship with Monteverde, she left the party with him, went to the firm’s office where he forced himself on her, resulting in quick, forceful sex on the floor of Monteverde’s office.

Both the firm and Monteverde were named as defendants in Marchuk’s lawsuit, and as a result, they mounted a serious and vociferous defense. During the course of the litigation, the defendants put forth evidence that Marchuck was infatuated with Monteverde, including witness testimony immediately before and after they had sex, and that Marchuk’s lawsuit (where she asked for $2 million in compensatory damages and $5 million in punitive damages) was motivated solely to enable her to get rich quick.

Now, I could wax rhapsodically, as so many others have done, about whether this is a plaintiff’s verdict (after all, she did win) or a defense verdict (she “only” got $140,000 instead of the $7 million she was looking for). Instead, let’s talk about why this case from New York City, involving a high-paid partner and a brand new associate, is important to you.

Keep It In Your Pants

Despite the fact that it seems like common sense, it needs to be said: employees getting intimately involved is almost always a bad idea, and it’s doubly bad when one employee supervises the other. Tell your employees to keep it in their pants.

Sure, it isn’t exactly the easiest policy to enforce, but if its on the books it will provide at least some protection if things go south. And who knows, maybe your employees will actually abide by the policy thereby eliminating the chances that you’ll find yourself in a deposition recounting exactly what you know about Janice and Bob from accounting were caught doing in the 4th floor bathroom…

And if you need motivation to enact and enforce a no intimate relations between employees policy, let’s take a quick look at the numbers involved here. Marchuck got $140,000. Let that number sink in. Sure, it isn’t what she asked for, but that’s still quite a large number. And it doesn’t include the fees that the defendants will pay for her attorneys, which will likely also be sizeable. It also doesn’t include the fees that the defendants had to pay their attorneys. There’s a good chance the total cost for the defendants is more than twice the verdict. Yikes!

So, maybe you want to go ahead and page through your employee manual, and double-check whether or not you have a policy to help head off this type of behavior and hopefully prevent just this type of lawsuit. After all, there are enough other legal issues for you to worry about (*cough* FMLA and ADA *cough*) why don’t we try to remove this one?