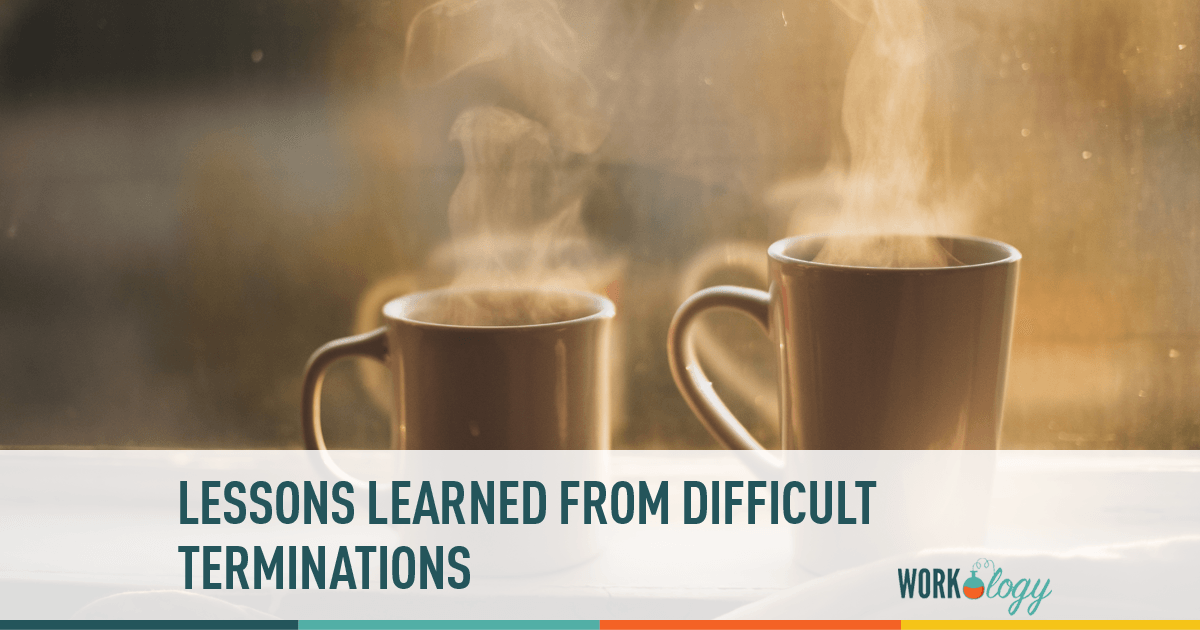 I have always told my HR colleagues, “If you get to the point where terminations are easy and don’t affect you, it’s probably time to find a new career.” Although there are those in the HR profession who seem to derive some kind of sick joy out of disciplining and firing employees, it’s my belief that such people harm the profession. If you are doing a termination right, it should be hard and definitely not fun. After all, you are telling someone they no longer have a job, which is not an easy thing to do even if that person messed up bad enough to warrant the decision. Here are some of the lessons I have learned from some of my most difficult terminations.

Sometimes a theft is caught clearly on the security cameras and leaves no question about the thieving employee’s guilt. Such was the case when I was working in HR at a company where a warehouse employee took product from the shelf and put it in his backpack in his locker. His manager received a tip from an employee that was supported by the camera footage. It was so straightforward that the manager and I assumed it would be a quick termination. A half hour into the termination meeting, we realized we were wrong.

Termination meetings should be short and free of lengthy explanations or discussion. In this case, the employee argued with us, tried to make all kinds of nonsense excuses for the theft and begged for his job. He just kept going and going with no sign that he was ready to leave my office.

If you have done everything right, you will have spent plenty of time gathering evidence and documentation to support your decision to terminate, so there need not be much discussion at the termination meeting. If you have an employee who keeps making excuses and begging, cut them off before they can go on too long. I should have done that and not let this employee go on and on.

At one company, we had problems with employees who were clocking each other in. These employees thought it was great because they could have a friend clock them in while they were at home sleeping or off doing something fun like catching a movie. Unfortunately for the offending employees, a supervisor started noticing that timecards did not seem to match when a couple of his employees were actually at work. After some investigation, we were able to figure out some of the employees involved, but we suspected more people. This meant our termination meetings were also part of a workplace investigation.

It’s not that easy to get an employee in the process of being fired to reveal names of guilty coworkers. In this case, it helped that the HR director was doing the questioning while I took notes to ensure good documentation of the ongoing investigation. We also had the employee’s supervisor present, which was helpful in navigating the friendships with coworkers and figuring out who else may be involved.

If you find yourself in a situation where a termination meeting must be used to uncover others involved in a situation, it is good to get your investigation questions out of the way before telling the employee they are terminated. In this case we had enough information to support our decision to fire this particular employee and felt it was best to terminate him sooner rather than later. In some cases, it may be better to keep the investigation meeting and the termination separate, so consider carefully what will work best.

Yelling, Crying and Other Emotional Outbursts

Occasionally you will have an employee who has a strong emotional reaction to being fired. If it is a matter of crying, give the employee some time to calm the tears before leaving your office, and be sensitive to the fact that this is a very emotional thing for that person to go through. If an employee is screaming and angry, you will want to diffuse the situation as quickly as possible to get them out of the building.

It is always useful to have another person in the room for a termination, especially if you suspect someone may become angry or belligerent. If you have security, notify them that you will be conducting a difficult termination. It is a good idea to have a neutral manager or HR person involved, especially if the employee has issues with their direct supervisor.

That neutral person can escort the employee from the building without putting the direct supervisor in a position that may make the terminated employee angrier. I have been involved in several tense termination meetings like this, and I was thankful to have that extra outside help when an employee needed to be led out.