Kevin Durant’s departure and announcement he’s signed a two year deal to play for the Golden State Warriors has shocked everyone including me. I mean, I knew it was a possibility but I didn’t want to believe. For the last 9 years, KD has made my city, Oklahoma City, and playing for the Thunder his home. We celebrated him, and, dare I say, we loved him. He was the manifestation of the growth and success of the fine city of Oklahoma City. Like Kevin, Oklahoma City is young. Oklahoma City is strong. Oklahoma City is going places, but even with its low unemployment and strong economy it might still have something to prove. Many of us were a little surprised if not crushed that Kevin decided to walk away from the thriving and growing city that is Oklahoma City. We were in this together, after all. Many fans and certainly the Thunder leadership took for granted the fact that KD didn’t want to move on to a new city; deal with new leaders and teammates. I don’t think we really considered the possibility of a Thunder team without KD.

As business and organizational leaders, we’ve all experienced that moment when our best player, literally the glue that holds the company or department together, puts in their notice to go and work for our competitor.

Kevin Durant just signed a 2 year, $54 million contract with the Golden State Warriors. The best player in the history of this young and hungry NBA franchise decided to hang his hat elsewhere. The Thunder leadership are left reeling, licking their wounds while we, fans of the Thunder and KD’s former teammates, are left wondering how they will recover in time for next season. I don’t know if there’s a team building activity or morning meeting pep in my arsenal for this type of business or leadership situation.

As leaders, teammates and Thunder fans, it’s easy to be angry. It’s easy to be mad. It’s easy to throw shade at young Durant who is eager to win and looking for leadership, mentorship and support from a team and its executive leadership. Transformational change is hard. Business politics are tough and being the best player in the game is a lot of pressure. I completely understand why Kevin might have made the decision that he did.

It All Starts with People Management

It’s not like we, the fans and the leadership, didn’t know Kevin was exploring his options and entering free agency. He had a signed contract with a beginning and an end date. We shouldn’t have been caught unaware. As employers and team members, we don’t always know when our employees have entered free agency and are shopping for new opportunities. It’s likely that it will happen, especially in this strong economy. Like KD, most of our best employees will have options. We shouldn’t delude ourselves into thinking that they don’t.

Whether our employees are passive or active job seekers, it doesn’t really matter. It all starts with the management and understanding of our people — because without them we are just a leader without any players to mold, shape and engage. We can’t win games with just the management. Some may call this people management but it’s really people leadership —  we aren’t just managing our people but leading them, inspiring them and most importantly guiding them to support our future business and leadership needs. 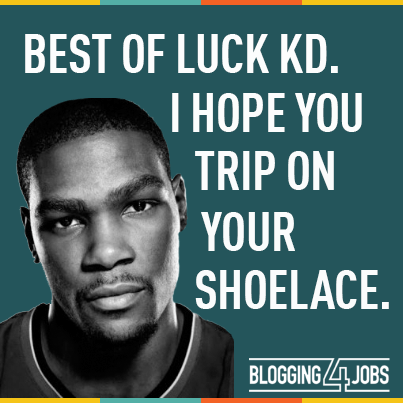 Re-Recruiting is Critical to Employee Retention

As business leaders we are constantly discussing succession planning and people management scenarios. We should also be considering our re-recruiting strategies to retain our best workers. We need to understand what they need in terms of leadership, development and experiences in order to develop re-recruiting and retention strategies. If we aren’t asking these questions or having these conversations, someone else definitely is. These workers are the MVP’s of our departments and offices. They are, and should be recognized as, organizational linchpins that are key to our business winning the big game. We also need to have a plan B if those linchpins decide to play or work elsewhere. Otherwise, we will be experiencing the type of chaos the Thunder leadership now is. I only wish Golden State experiences the same type of chaos in a year — after Durant returns to OKC.

Referrals As a Long-Term Strategy

We want nothing more than to work with people we like, know and trust. We enjoy their company and they push us to be better, stronger and faster with our game. The key to Kevin Durant signing with the Golden State Warriors started with a relationship that was built on friendship with power forward, Draymond Green. How did Draymond win the heart and mind of KD? Draymond took nearly a year to build a relationship that started with getting to know him as a person. It started as friendship and naturally led to conversations about winning championships, team dynamics and KD’s personal development as a man and player.

“And it’s not about ‘I’ with us on this team. It’s all about ‘we’ and winning championships. He (Kevin) fits that mold perfectly because that’s who he is. It doesn’t take him changing his whole game or changing his personality to come join us. He’s just going to be Kevin,” said Draymond Green.

Imagine having someone in your organization who doesn’t want to be just the star player but is so engaged and involved that they are looking to have top talent join the organization and work with them. It might mean more competition and less playing time, but sports isn’t based on whose email inbox is the most efficient or what Excel spreadsheet has the most formulas. It’s about being a better team together and going beyond individual contributions to achieve a national championship. At the end of the season it’s all about the Ws, which is why KD took what I think is considerably less money to join Draymond, Stephen and Golden State.

We’re All Keeping Our Options Open

Personally, I believe that KD signing a two year contract does more bad for him than good. It shows Golden State he is keeping his options open, and that he might opt to move elsewhere next year. On the other hand, Kevin might make less money, but this move does give him a chance to keep his options open. He can test out the waters at a new office, location and with a new supporting cast of teammates. He will be living in Silicon Valley, after all, where a long employee tenure is 12 months — just about right for this new, young and hungry KD.

But aren’t we all keeping our options open? And what about the team that Kevin Durant left behind? How is the Thunder leadership going to retain their remaining talent, including Russell Westbrook who has only one year left in his contract? The Thunder need to have Russell sign a contract extension stat, because every team needs a leader on the court and in the cubicle.

KD really left the Thunder in a bad way, but the Thunder are equally to blame for poor people management and succession planning. Unfortunately, it’s too late in the free agency game to snag any top players to join the team this upcoming season.

I wish nothing more than the best of luck to Kevin Durant. But there is real work ahead for the Thunder’s leadership. This is a real opportunity for Russell and other players to step up, take charge and make a bold statement that just might surprise all of us. Everyone loves a good underdog story in sports and especially business.

Best of luck KD. I hope you trip on your shoelace.