Should You Be Faking It in HR? 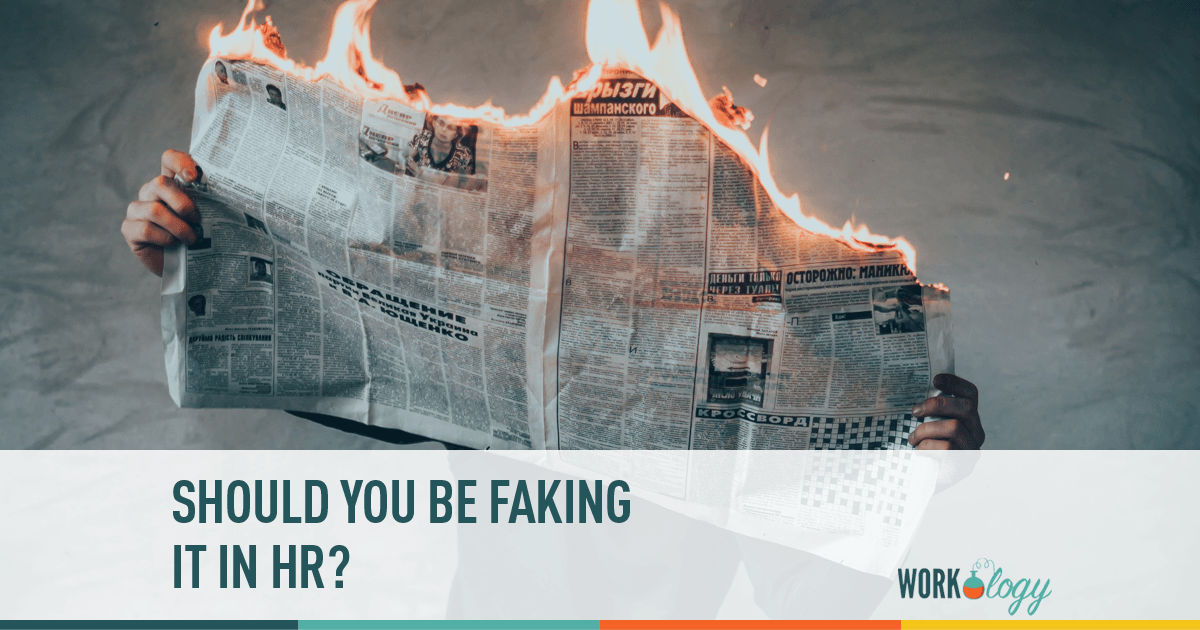 In the summer of 1989, the movie “When Harry Met Sally” was released with millions watching the famous Sally fake orgasm that sent shock waves across the country. The 80’s were all about self-expression, whether it was wearing hand-cuffs in a belt around your waist, shaving a mo-hawk and spraying sections in various colors, or expressing your art-form on buildings built in the early 20th Century. This was the time period for breaking down barriers to shape a future society. And, to finish the decade out this Sally character was making a proclamation to us all. She was setting us out into life with the proclamation that sometimes people create a mental Just Fake It scenario in order to make it through the seconds-minutes-hours-days to accomplish the end goals.

Several months after the release of the movie, I met my life partner. Both of us were very independent creatures and had no desire to be in a serious relationship. But, we made the mistake of entering a physical relationship together. Well, ‘O’ happy days. Sure, there were difficult years due to life circumstances. Individuals who are in a long term relationship understand that this is where you insert the Just Fake It mental scenario.

Our working environments rely on the need for mental scenarios to move fluid each day. There simply isn’t a way for one personality to have a positive connection with everyone. It just isn’t humanly possible for this to be true! As a HR manager, how many hours have you spent listening to complaints about the hiring process from all involved on the hiring team? How many times were you sitting listening hoping to be somewhere else? Human personalities have so many variances that it is impossible to make everyone happy in every situation.

Several years ago, I was recruiting a sales team with a newly hired manager in the middle of the recruitment process. This particular manager had all the makings of a narcissistic personality minus the mirror in hand. The debriefing phone calls were more about the manager than the candidate. When we finally started discussing the candidates, it was always about how they made this manager “feel” vs. cultural fit, hard and soft skills, etc. If it was about the candidates feelings, I would’ve seen a future leader. But, that was not the case here. To say that my patience threshold was maxed out is an understatement. My husband listened that evening to the mental frustrations expressed about the situation. After several minutes of listening, my husband calmly said, “You have made it through our hard days over the years, use the same methods in your recruiting profession.”

I spent the next week thinking long and hard about how to partner with “all hiring team participants” in order to complete the hire. The ah-ha moment happened!!! Create an experience with each manager similar to Sally in Katz’s Delicatessen.

Mental Scenario – We would be a pilot (manager) and co-pilot (recruiter) of an F-15 Eagle fighter jet. The F-15 first flight took place in July 1972 and has been consistently listed as one of the most successful planes ever created. The all-weather plane was designed to gain and maintain air superiority, holding dominant positions, and flying at speeds greater than Mach 2.5. Doesn’t this sound like the right hiring environment? I began implementing this mental image while working with managers. Over the years, I have been honored to watch managers hire award winning teams. The mental image started by watching the manager put on the helmet, jump into the pilot seat, grab the yoke, and take us (as a team) into flight which consistently attracted the right talent. And, I have excitedly been a part of several occurrences with both of us experiencing a Sally moment. Yes…..Yes……Yes!!!!

THE BOTTOM LINE FOR HR PROFESSIONALS

There will always be difficulties with hiring because personalities drive the process. It is what draws all of us into the HR field and feeds our individual motivators. We are in the profession with a strong desire to build solid organizations by finding the right people for open positions. In order to keep it fun and exciting year after year, sprinkle a little Sally into your days. She might be able to help you create a mental Just Fake It scenario that builds award winning teams.

A good team, like a good show, comes into being when the separate individuals working together create, in essence, another separate higher entity – the team – the show – which is better than any of those individuals can ever be on their own.”