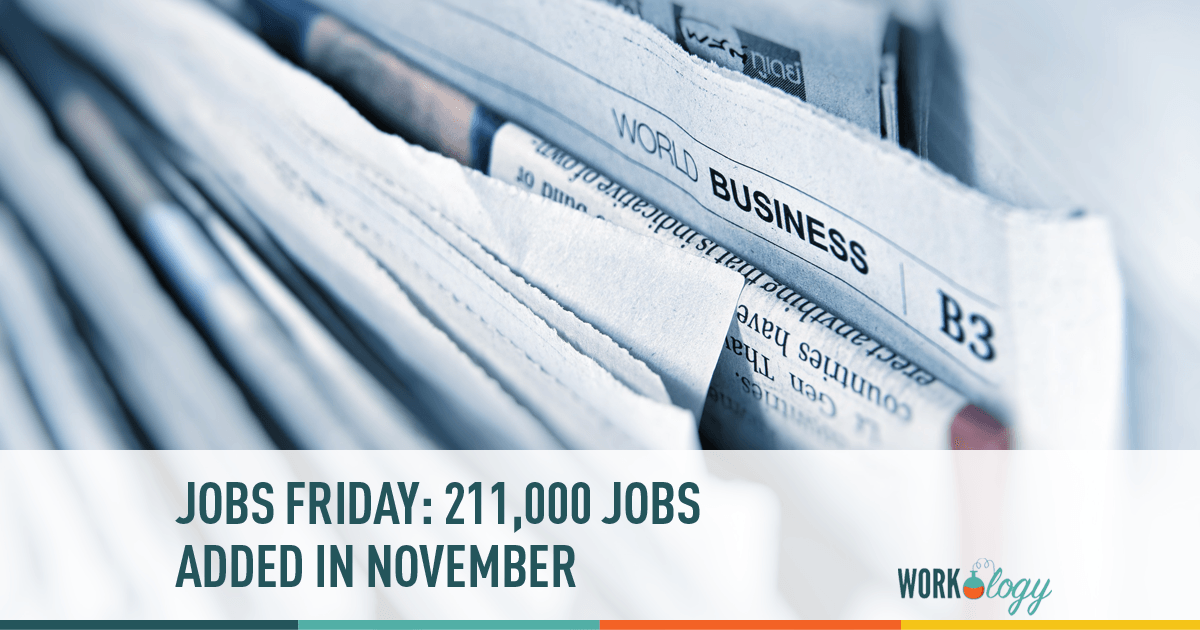 Jobs Friday again? It seems like only yesterday I was writing about October’s encouraging numbers. November’s BLS report shows all the trends we saw in October – more jobs, low but unchanging unemployment and no gain in wages – holding steady.

While most commentary on this month’s report is focused on that long promised rate hike from the Fed, I’m more interested in that lack of movement in wages. Unemployment is low – that’s good. Wages, though, aren’t rising – and that’s bad. More money in more pockets means more spending; and an economy with a strong middle class is a healthier and more stable economy. Wages did go up slightly, by 0.2%, but that’s not enough to match inflation or to help American workers catch up with the gains high income earners maintained throughout the financial crisis.

Meanwhile, the September and October BLS numbers have since been revised, and they’re even more encouraging: October’s 271,000 increase is now pegged at 298,000. September’s 137,000 is now 145,000. As the New York Times puts it, job gains are ticking along now “like a metronome,” but wage increases and movement from part time to full time is fitful. Overall jobs are increasing and overall unemployment is decreasing, but underemployment continues to be the reality for many Americans. In fact, underemployment rose by approximately 3.8% in November, even with many sectors adding full time jobs, and there are still plenty of discouraged job seekers not being counted.

Unemployment among teens remains high at 15.6% and while retail added 31,000 jobs in preparation for the holiday season, not everyone is hiring – online shopping and depressed or unpredictable retail spending are still major factors in this sector. The story remains the same for the energy and manufacturing sectors too, as they continue to shed jobs. Other sectors, including construction and tech, continue to boom.

What does that all add up to? Low wage and blue collar workers are still vulnerable, but with the economy adding jobs month to month, we may see more upward pressure on wages in the new year. But three months of steady job growth could slow, and many of those new retail jobs will disappear in the new year. It’s complicated. Unemployment looks certain to continue to decrease, and wages to continue to slowly increase – beyond that is a lot of uncertainty.

Of course, what we do know for certain is that the fabled interest rate hike 0f 2016 is coming. So stop speculating about it!