Is Crunch Popular Because Coding Is Boring? 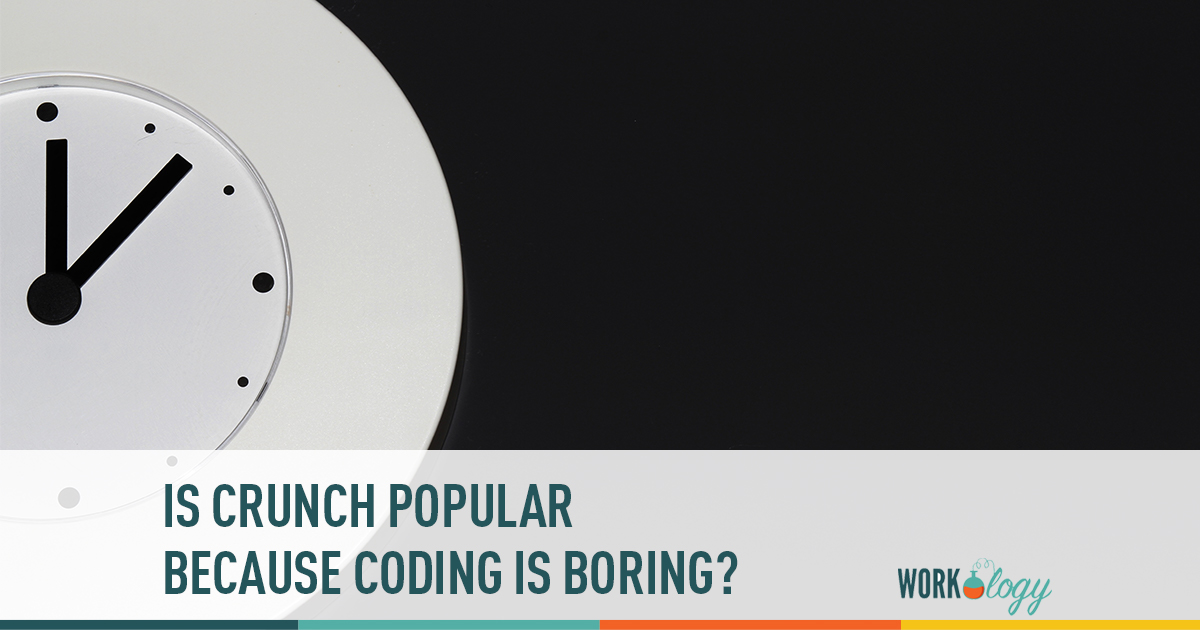 The tech industry is talking about crunch time again. Specifically, this time it’s the game industry, debating the value of long, sustained coding sprints to make deadlines. The latest iteration of the conversation was sparked by Polygon’s publishing an excerpt from from Walt William’s memoir of his decade plus time working in the gaming industry. His piece, Why I Worship Crunch, was taken by many as a wholesale endorsement of crunch.

In it, Williams says that while crunch is unfair and unfun when you aren’t invested in the product, it’s just a part of the gaming industry that younger devs have to reconcile themselves to if they want to be successful. The piece details the sacrifices he’s made in his personal life in the name of crunch: sometimes out of necessity, sometimes as an act of avoidance, and other times out of passion. These include answering email in the ICU and missing the birth of his child so he could send out a to do list. It’s a toxic level of overwork that we know isn’t necessary to creating great work, but one that many creatives and entrepreneurs have an addiction to.

On first read, Williams’ piece seemed like the worst of the worst; the white collar machismo of overwork combined with the overblown importance some go-go industries assign to every stage and aspect of a project. Williams later clarified that he isn’t truly in favour of crunch (or Crunch, a godlike thing to him) for everyone, or even as the sole work model for the gaming industry, but that for some reason it works for him. The excerpt was meant to build buzz for his book (and I’d say that’s been accomplished), and to let us into his head a little so that we could understand why crunch has become the only way he (and many others) can work.

Hey. I'm a mess of a human being who also makes video games. I wrote a book about that. It's a memoir, not essays or an expose. Just me. 1/

Is Crunch Popular Because Coding Is Boring?

Studies show that crunch, which is a kind of manufactured crisis overtime, doesn’t produce better work in either the short or long term. Your ability to sustain high productivity drops off quickly, even in a situation where there’s good reason to keep going as hard as you can. You can work at your peak for a few hours a day, or on a longer scale for a few weeks straight, but after that your mind and body need a break. The quality of your work plummets and so does the clarity of your thinking. But when you’re riding the high of crisis stress it doesn’t feel like that. The urgency propels you forward and makes it seem possible and necessary to keep it up. You find yourself working 12 hour days and still feeling guilty about not getting more done. You feel like a champ for having pushed through it, a better person than everyone who failed to crunch. in this way, crunch motivates, validates and rewards in one.

Williams says that when you’re excited about a project that impulse to overwork is passion, but when it’s boring to you, it’s just crunch, and I think he’s right. Passion often drives us to put in long hours or make sacrifices – when you’re working on a true passion project it hardly even feels like work. There’s a kind of high to working on something that feels important and special, especially when there’s a deadline attached. Crunch tries to mimic that feeling, to generate a false sense of passion by cloaking the everyday work production cycle in a veil of urgency. If you are always coming up on a deadline, working hellbent and at your hardest, then you are receiving all of the chemical signals that you do on a passion project – all that excitement – without the organic reward of loving the thing you have made.

Crunch has become something more than “working towards a deadline last minute,” it’s become a work model for whole industries. It’s been institutionalized in game development to the point where a game making its release deadline is almost more important than a game being released as a complete and functional product that satisfies customer desires. It’s so burnt into the production process that every checkpoint up until the final deadline gets a bit wobbly because time will be made up in crunch. When you have a lot of very talented developers but few good managers, crunch is necessary. It’s just the thing you do to make up for your managerial failings, everything from bad scheduling to not anticipating potential problems. Over time it becomes a habit. Over time it begins to seem like the only way your team can work. And over time it becomes the normal way of doing things, one which conveniently allows organizations to extract a tremendous amount of labour from workers in a short period of time and, depending on business needs, let them go once the project is done.

Most of my developer friends work full time with benefits but have the a pretty similar work schedule to me, a freelancer. Even more than me they’re in a constant battle against deadlines and working overtime. But so often the products they’re working on are the most mundane things you could imagine and all the stress they’re riding on, for good or ill, is wholly manufactured. If they miss a project deadline their boss will be mad but the company won’t instantly crumple and its funding fade away. It leaves me wondering why they’re strung out so often. And it reminds me of the incredible stress I experienced at some of my least interesting and least significant roles. Not all coding is interesting or important, but crunch can make it seem that way. Even going on a coffee run can be exciting when your whole team is frantically working toward a deadline and some nebulous doom is set to descend unless caffeine levels are maintained.

Crunch makes work more exciting and more chemically fulfilling. It makes even the most boring parts of the gaming industry seem cool. And maybe that, more than anything, is the reason that so many are unwilling to give it up.

The evidence is in – crunch is bad for your bottom line. But doesn’t it make you feel important?