Is Blind Hiring the Way to Fix Bias In Recruiting? 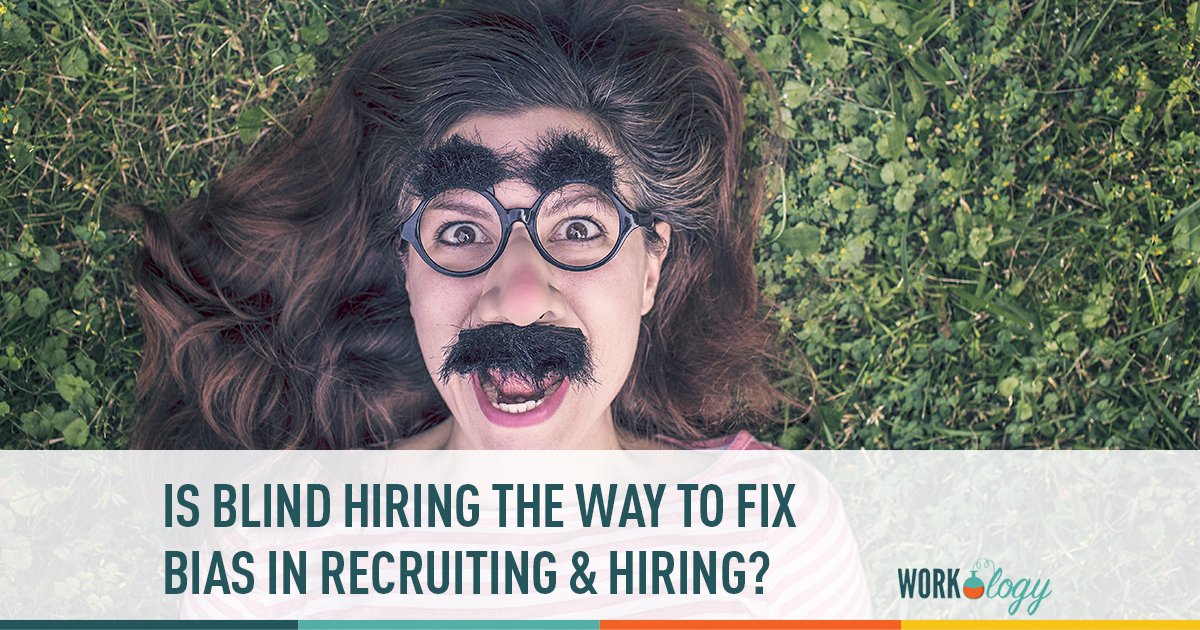 Nothing and nobody is bias-free. Thanks to human psychology, there are two existing types of bias involved (almost) every time in the workplace. These biases are either conscious or unconscious: they can become troublesome in the work settings. But once the issue is acknowledged, we can try to escape it. Thankfully, in an era where we are (still) fighting for diversity, we are now raising awareness on the issue.

On the one hand, conscious bias defines the judgments people have consciously or on purpose towards others. This type of bias can go far – even into disobeying the law.

On the other hand, unconscious bias is defined as, “a bias that we are unaware of, and which happens outside of our control. It is a bias that happens automatically and is triggered by our brain making quick judgments and assessments of people and situations, influenced by our background, cultural environment and personal experiences.”

In other words, those who experience unconscious bias might not even realize that they are judging. Interestingly, conscious bias can be shifted into “unconscious bias” for reasons of denial and guilt. There are different types of unconscious bias such as: conformity bias, beauty bias, affinity bias, similarity bias and more – it is a complex phenomenon.

These biases affect attitudes and behaviors significantly. Seeing through a “bias lens,” our perception, attention, skills and affirmations are affected. Unfortunately this can lead to, for example, having someone whose unconscious bias towards a specific race makes them appear racist, while the person in question doesn’t even realize it.

In an industry such as recruitment, it is unacceptable to have such biases. How can a recruiter with conscious or unconscious bias do his job?

But what is there to do to change this problem? In 2017, can be hard to admit that we are still fighting for diversity and open-mindedness in society in general – and consequently – in the workplace.

When talking about recruitment specifically, take the example of a recruiter who sorts a pile of hundreds and hundreds of CVs. Out of all of them, the chances are some CVs might appear less appealing to the recruiter because of the name, gender, race, address, and other factors. But this example is obviously outdated, as nowadays, fortunately, most recruiters use technology to facilitate the process and thereby limiting bias.

Yet, interviews in the hiring process are still involve human interaction. It’s common for managers to hire candidates with similar profiles to them, which leaves qualified candidates with non-traditional profiles apart. To change this, we can talk about blind hiring.

Blind hiring has been debated for decades. Let’s face it, humans are not perfect at hiring. In fact, a study of consulting firms has shown that similarities in things such as leisure and personality between hiring candidate and recruiter were the most important factors for recruiters’ evaluation of candidates.

Another one sadly confirmed that the tendency of subjective hiring is mostly related to race.

Blind hiring should be a priority for recruiters. Some small companies in the US and the UK have implemented this type of hiring into their process: for example, their candidates complete work samples or take assessments.

It helps to erase all sorts of stigma and discrimination that simply has to disappear, and allows recruiters to examine the true talents of their candidates – and nothing else. Azmat Mohammed, director general of the Institute of Recruiters said of blind recruiting that, “the reality is that people carrying out interviews, at the next stage on from applications, are humans. The thing is for them to be able to analyze their own biases. Everybody has them and business are working to address this issue.”

Could blind hiring be the fix recruiting needs? First, recruiters need to be aware of and acknowledge the existence of biases. Secondly, recruiters need to apply blind hiring to their hiring processes. It has the power to overcome bias and to really build a diverse workforce. A workforce that brings together different types of people with ideas and visions inspired by their diverse backgrounds should ultimately give that business a greater chance of success!

Richard is co-founder of Jobable, Asia’s data-driven career platform. With more than 10 years of experience in the recruitment industry in Europe and Asia, he has acted as a trusted advisor to global investment banks and asset managers. Asiamoney Magazine has recognised him as one of the top headhunters in the Asia-ex Japan region. He is a known figure within the HR technology space, making regular appearances at industry round tables and entrepreneurship events. His blogs and whitepapers have been featured in global HR publications. He holds a Masters Degree in Law from the University of Cambridge.