In Recruiting: What’s in a Name? 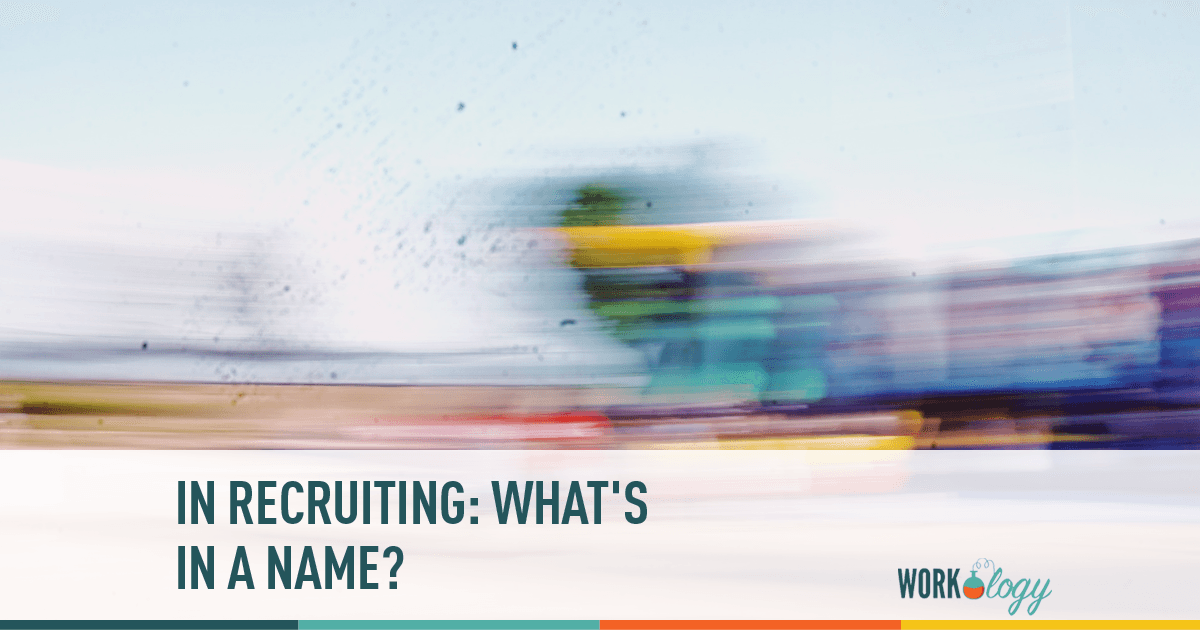 In Recruiting: What’s in a Name?

“What’s in a name? That which we call a rose by any other name would smell as sweet.”

she was obviously drunk with the naivety of young love. If all names smelled equally “as sweet” then we wouldn’t spend time researching, choosing, and safeguarding (so no one steals it) the “perfect” names for our children.  There would be no naming ceremonies, selecting of appropriate Confirmation names, or explanations of the meaning of that old world name no one but you can pronounce. And there certainly would be no worrying about whether a name is suitable for a future Heart Surgeon, Media Mogul, Entrepreneur or POTUS.

Last week one of the worst kept employment secrets was leaked.

Shocking, I know. We really needed a report to tell us that racial bias exists in the hiring process. This topic was discussed by the ladies of “The View” in conjunction with a very informative and scientifically sound You Tube Video called “The Top 60 Ghetto Black Names”.  On the show, Co-host Raven-Symoné said she would never hire someone named “Watermelondrea”, one of the names of the list.  I was thiiiiiis close to shrugging the declaration off as another airhead, idiotic, thoughtless, foot-in-mouth, “That’s So Raven” blunder because the video was meant to be completely absurd. Plus, her parents named her Raven. Even if they were fans of Edgar Allen Poe, the hyphen, “y” and unnecessary l’accent aigu are, well…never mind.

Removing Raven’s silly self from the equation, I considered the troubling fact that far too many people responsible for their company’s hiring share the same view.  I’d be no better than Juliet to discount that more people favor John over Jamal, Katelyn over Keisha, and Meredith over Monesha.

As a recruiter, I’d be untruthful if I said I didn’t “judge” people’s names. Yes, I’m guilty of a little eye squinting, nose flaring, and raising a one finger peace sign when I see a candidate with the same name as a loathsome ex-boyfriend, a mean girl nemesis, or the former boss I wanted to hulk-smash. I assume that Tracy is a woman and Chris is a man. I have to regroup and hide my surprise when we speak for the first time and their voice doesn’t match my assumption.

I am also guilty of the judgment that’s not rooted in negativity.  Varying degrees of smiles adorn my face at the sight of my favorite elementary school teacher’s last name, “Keirsten” spelled correctly, or one of the names I’ve pre-selected for my future mini-me(s). And, then there are those LOL funny names that my colleagues and I improve upon or transpose as only mature, professional adults can do…I’ll spare you.

The point is, EVERYONE NAME JUDGES. It’s an unconscious bias, but NOT one that should be a barrier to employment.  Oh, not you?  You’re lying.  I’ll prove it.

You assumed these are the products of Hippie parents who named them after hitting the bong a little too hard. Still not convinced?

Are you fondly replaying your favorite episodes of the “Dukes of Hazard”, “Mama’s Family”, or “Here Comes Honey Boo Boo”? No?  OK, I guess it’s just me.

Regardless of whether the product is a favorable or adverse outcome, it is NEVER OK to inject bias into the employment selection process.  A person’s name is not a performance indicator. Furthermore, the likelihood of securing employment shouldn’t be the main reason for choosing a racially or ethnically ambiguous name for your offspring.  Imagine an organization whose employees have unique, culturally rich names rather than 4 flavors of Bob (Bob S., Bob from Accounting, Bob with the candy dish, and Bob I prefer Rob). Would such an organization be more innovative, collaborative, creative, and productive? Maybe, but we’ll never know unless those of us on the hiring front lines acknowledge, address, and abolish our conscious and unconscious name biases.