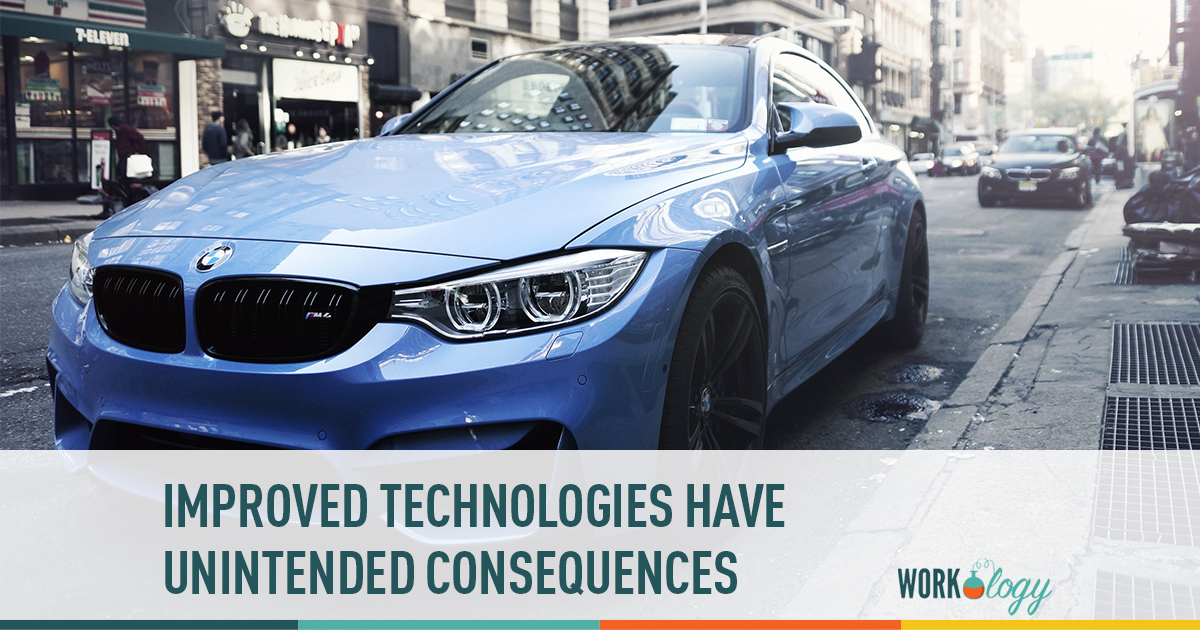 I recently came across an interesting article on PCmag.com about the unintended consequences of driverless cars. This article was written by someone whose a family member received a donated lung from a car accident victim. Their family member had been saved by this donation, as had another four individuals who benefited from the harvested organs from this accident victim. Driverless cars are supposed to reduce highway deaths by over 30,000. This is a noble intended consequence, but what will happen to the people waiting to receive donated organs? Their mortality rate will rise as a result of fewer organs being available from car wreck victims. This is a negative and unintended consequence. This got me to thinking about what other possible unintended consequences we might see from changes in technology.

Beyond the reduction of organ donors that are available, what are some of the other unintended consequences of driverless cars? There are several jobs that could be negatively affected by driverless cars reducing accidents. These include:

Beyond the reduction in accidents, just the need for fewer drivers will affect many jobs as well, though that is an intended consequence. What about something closer to HR?

One of the advancing technologies that many companies may take advantage of is the Internet of Things, which makes it possible to track employees’ whereabouts during the day. This has both positive intended consequences and possible unintended negative consequences. The positive would be increased productivity by being able to provide the best routes for employees, both internally and externally. Less time would be wasted. The unintended consequences might be workers’ displeasure with intrusive surveillance leading to worker unrest because they feel their privacy is being invaded.

Obviously one of the intended consequences of technology is job loss. Replacing workers who perform rote tasks makes perfect sense in today’s world. We use technology to improve speed and performance over what humans can do, such as on an assembly line. Sometimes, however, we don’t think beyond that immediate job reduction. This is called the “imperious immediacy of interest,” but if we were to think beyond the immediate fewer factory workers, we might also see that it may mean fewer office workers, fewer supervisors, fewer managers, fewer HR people, and fewer executives. These jobs may not themselves deal with rote and repetitious work, but with fewer line employees all those staff jobs are also not needed.

To get past the problem of Merton’s imperious immediacy of interest, it might be helpful to have someone else look at your technology plans and see if they can determine what unintended consequences might be. Jim Taylor, writing in Psychology Today, says that software companies get by this through “leaking” their software to unallied developers to see if these people can poke holes or find bugs that can then be fixed. Getting others involved in the process of introducing some major technological change may help prevent major mistakes and unintended consequences of your actions.

Take that thought into consideration before you move ahead in technology changes. It doesn’t mean you will stop what you are doing, but anticipating unintended consequences may save a great deal of heartache for all the parties involved.