Human Resources in the Zombie Apocalypse 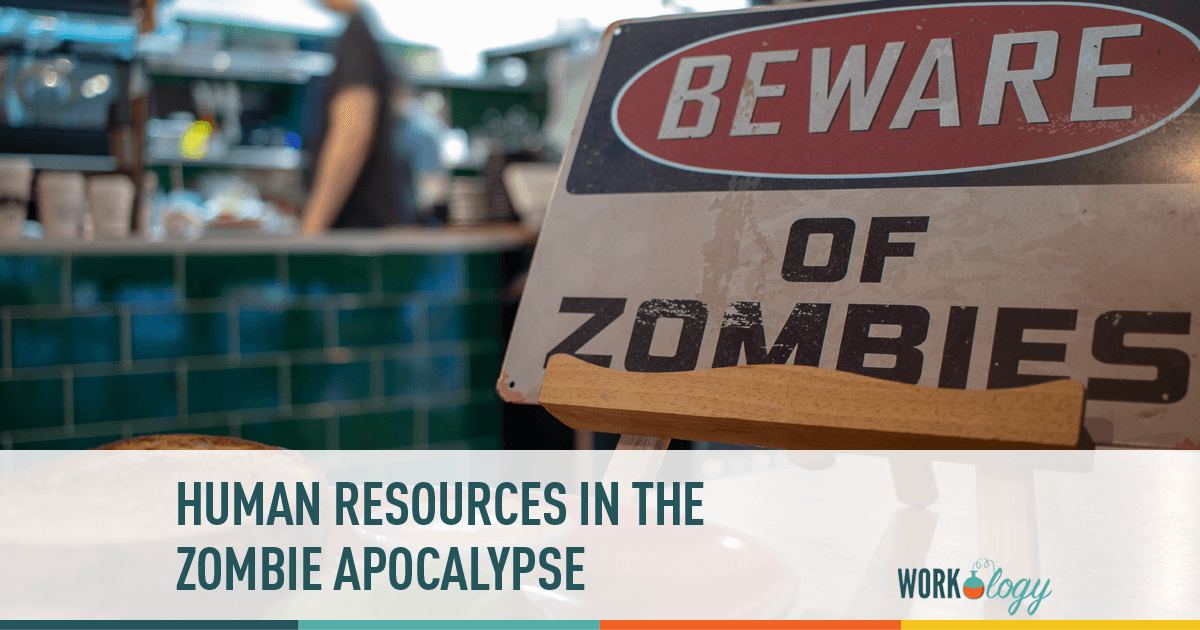 So it’s the apocalypse. Damn.

Society is falling apart around you, zombies are roaming the earth, and you’re stuck weathering this hell with a random group of yahoos. But in happier news, you’ll never have to sign a form or write a report again!

Apocalyptic fiction is full of brute force leaders who keep their groups together through screaming, threats of violent death, emotional blackmail, and sometimes actual violence. Their leadership is confirmed and supported by their superior survival skills — shooting, running, smashing — and remains wholly focused on basic survival.

But this is bad leadership, as anyone with a background in management or human resources should be able to quickly recognize, and zombies are no excuse. Those shambling horrors are certainly a threat, but one that can be assessed, planned for and contained — that is, if your group doesn’t fall apart around you. Any seasoned horror fan will tell you that it’s not the zombies that are the real threat, it’s other people. Well, that’s where human resources needs to step in.

Let’s talk leadership and team building in the zombie apocalypse. Don’t worry, there won’t be any org charts (though that wouldn’t be a bad idea)!

The Team Is More than the Leader

Leaders can be compelling figures. They’re the boss. They make the important calls. Often they’re charismatic. But leaders are nothing without their teams, and teams are more than the sum of their leader’s whims. In an unstable or dangerous situation, it’s tempting to cleave to a charismatic, seemingly powerful leader. Power can look a lot like stability and stability can look a lot like safety — but is the leader listening to and responding to the group? Is he — and in apocalyptic fiction leaders are almost always a “he” — making the most of the skills and resources the group brings to bear? Probably not.

People aren’t archetypes. No one in your group is the whiner or the hard case or the sadsack. They’re complex individuals with strengths and weaknesses and skills that you have to take into consideration, and if you’re smart, make the most of. Just as in your real life team not everyone can be or needs to be a salesperson, not everyone in an apocalyptic survival group needs to be a warrior. We know that organizations live and die on planning, teamwork, and meeting goals — why do we think things would be any different in the midst of a disaster?

Crisis management is a special skill but its fundamental goal is to end the crisis. A good leader wants to see the other side of the crisis and he works with his team, not against them, to make it there.

But wait, how can the crises ever end when we’re trapped in a freaking ongoing zombie apocalypse? Zombies suck. But so does war, catastrophic stock market manipulation, extreme weather, and famine. On a smaller, more everyday scale, we face crises at work and at home regularly and more often than not, we make it through them. Apocalyptic fiction is a terrible fantasy where everything we know about coming together, about planning, about group psychology even, falls apart. Nothing seems to work for the group on The Walking Dead or the casts of George Romero’s many zombie films. But we know better, don’t we?

Moving past crisis is one part just hanging on, and one part planning. Standard operating procedures, training, strong teams and planning for good and bad possibilities is how real life organizations make it through crisis, and it’s how an apocalyptic survivor group can turn a seemingly never-ending crisis into something manageable.

Let’s use The Walking Dead as our example. Every time they turn around there’s a new disaster, and while many of them have been beyond their controls, others could have been averted. The leader, Rick Grimes, has demonstrated deep dedication to their survival but also instability and an inability to compromise. And while he’s had trusted lieutenants over the years, this has always been an informal arrangement — the group lacks both team leaders and succession planning. Rick is indisposed? Oh no, time for battle of personalities. Whoever wins the argument takes charge of the group. The group’s been split in two due to zombie hoard, bad storm, or roving marauders? Do they have a pre-arranged rally point? No, I guess they don’t.

Planning to survive is about more than making it through, one day at a time, it’s about imagining the long run — what it could be and what you want it to be — and working towards it. It’s also about building a healthy team that can survive and excel, no matter what gets thrown at them.

What to Do About Bad Actors

If your coworker is a bully you can report them. If your employee is an underperformer you can coach them or discipline them. You can even fire toxic employees, if it comes to that. What are you supposed to about lazy apocalypse survivors? Or bullies?

As with any organization, the first thing your apocalyptic survival group needs to do about bad actors is not let them in. Don’t take in obvious bullies or admitted cannibals. I mean, obviously. You don’t need another body or a particular skill more than you need a strong and cohesive team. If you’re on the fence about letting someone in, negotiate a trial period. Zombie survival isn’t a job, it’s a lifestyle, and there aren’t any vacations.

Being cautious about who joins is just the start of your due diligence. But what’s next?

The answer here is more obvious than you might think. In apocalyptic fiction, all your sweet, helpful group members are potentially self-destructive, cannibalistic sociopaths. The reality would probably be much less dramatic. Think about your colleagues. Some of them handle crises better than others. Some of them act out, sabotage themselves, or spread toxicity through gossip and bullying. Most of them, though, just want to get by — or get better. How do you build a good team, even when you don’t have the best of the best? You set expectations and goals. You work to build ties between group members, loyalty to each other and the group as a whole. You communicate and consult and build consensus around a mission.

In other words, you talk. You acknowledge complaints and take on suggestions. You talk a lot and you listen a lot, and you build memories and traditions and a group culture that ties people together, instead of setting them at odds.

And should a cannibalistic sociopath slip through your careful screening process and trample over your delicate group mores, well, you know what to do. It’s the zombie apocalypse after all.