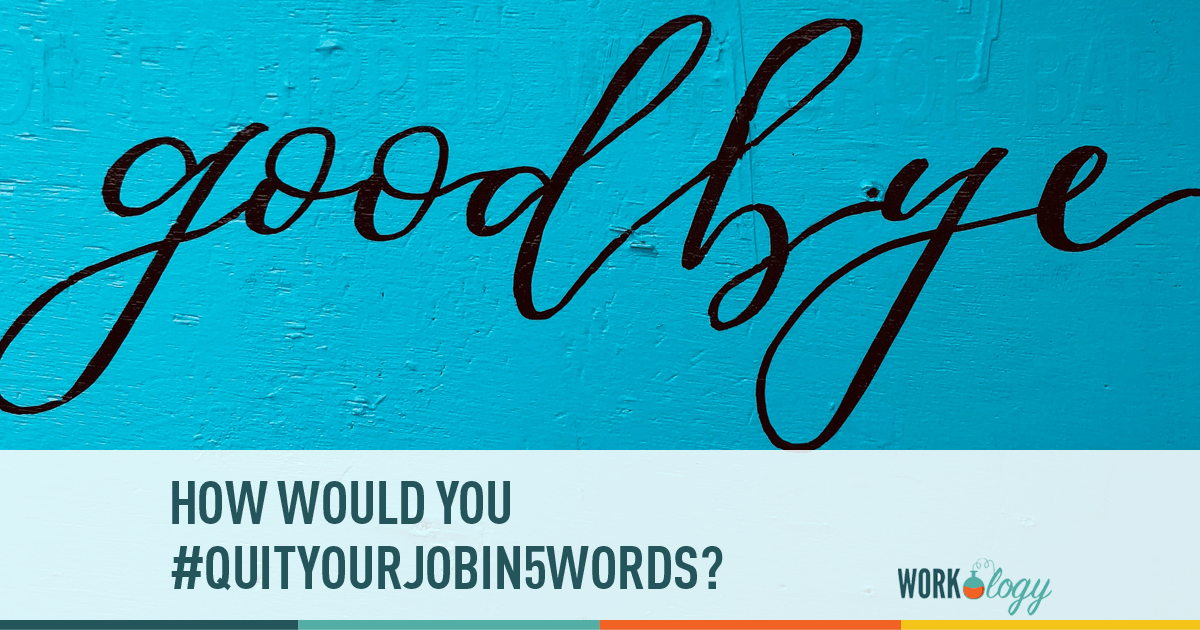 Comedy Central’s @Midnight decided to put it to a panel of comedians: how would they quit their job in 5 words? The panel was a part of the show’s regular feature Hashtag Wars where they create a hashtag for the comedians to riff on and for viewers to join in on, responding with their own jokes.

#QuitYourJobIn5Words was apparently inspired by the coming end of summer — even though the fall isn’t the most popular job-quitting season, its association with change (new school year, leaves dropping if you’re in a more northerly state) does get people thinking a lot about what they like and don’t like about their current jobs. The same is true of the semi-regular New Year crises you’ve probably experienced — I say probably because January actually is one of the most popular times for job hunting. External triggers, from new opportunities to seeing how much more successful your college frenemy is than you, can turn a unsatisfied-but-hardworking employee into an unsatisfied-and-looking-to-escape employee easily: when work frustration starts to build even scenarios that definitely won’t make you happy (like unemployment) still look good in comparison.

The @Midnight segment was wildly popular and after it went viral, so did the hashtag, trending overnight on Tuesday and into Wednesday. 100s of tweets later, we now have a good idea of how — and why — some of our employees are thinking of quitting. Most of the responses are abrupt and fantastical (and quite a few of them are hilarious), but some also reveal the deep vein of resentment that many employees feel about jobs they’re dissatisfied with or even hate. Some of them are mean or violent in the “burn it all” school of quitting, while others riff on famous social media gaffes that have lead to public firing with extreme prejudice. It doesn’t take a lot to get people chatting about their favourite quitting fantasies and not all of the responses in the hashtag are safe for work so do tread carefully if you’re in the office.

That it takes so little to get a hashtag like this trending should get you thinking about what you’ve done for employee satisfaction at your workplace lately. But in the meantime, here are six of my favourite safe-for-work, all time classic reasons your employee — or you! — quit or were fired:

So today's the drug test? #QuitYourJobIn5Words