How to Give 360-Degree Feedback to Different Personality Types 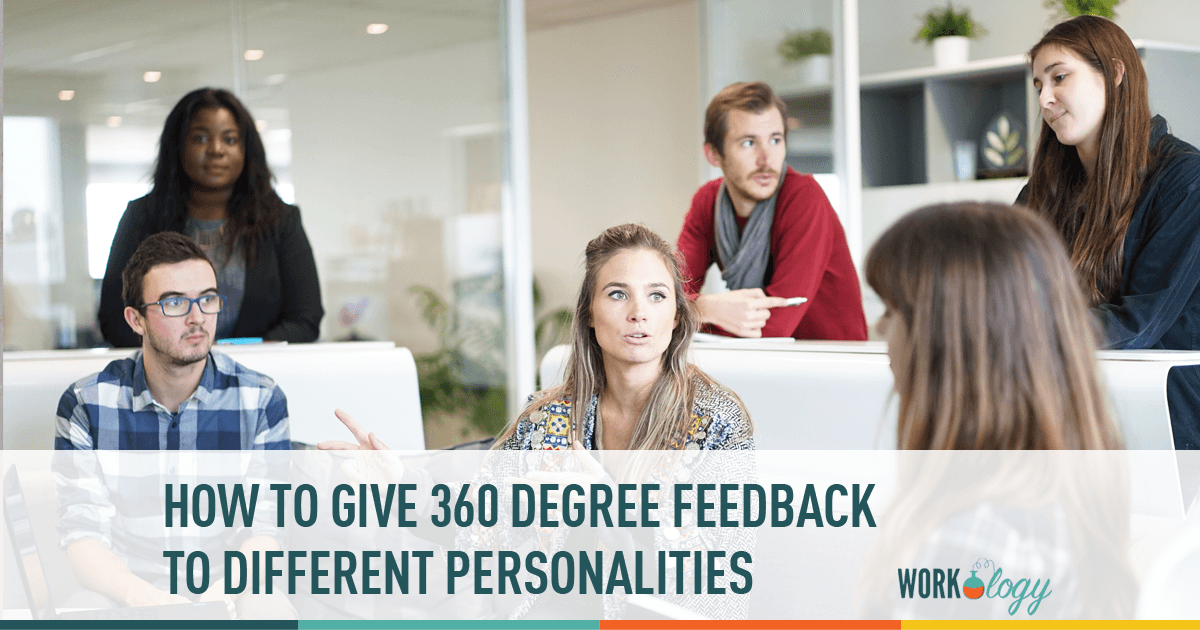 Personality has a huge impact in the workplace: from a first impression during the interview stage, to everyday interactions, to giving and receiving performance feedback. In one survey, 78% of respondents rated personality as the most important criteria when hiring someone, voting it even more important than a potential candidate’s skill set. The research found that people with a certain IQ level who also displayed personality traits such as an openness for change, persistence, curiosity and social engagement would likely fit into any team or department within a company. It has such an undeniably large role to play that it’s increasingly important in modern workspaces to acknowledge differences in personality.

How to Give 360-Degree Feedback to Different Personality Types

When introducing 360-feedback to your team, you will undoubtedly have to provide it to a variety of personality types. Not everyone is going to respond to feedback in the same way: how they receive it will be largely impacted by their personal characteristics, and it is key to be aware of this. As a manager, it’s important to make sure that everyone feels recognised and valued. In order to build and maintain good working relationships with your team, the key is not always to treat them in the way you would personally prefer. In terms of 1-on-1 relationships with team-members, it’s most effective to consider people’s individual personalities and values and adapt your behaviours to align with them. This is where 1-on-1 meetings and post-feedback follow-ups can really come in useful and allow you to connect with team-members.

Allison Mooney outlines the four personality types which make up your team: Playfuls, Powerfuls, Precises and Peacefuls. Although the personality classifications outlined make up one of many models, they provide a relevant summary of the types of people you’re likely to be interacting with in the workplace. As with any classification system, not everyone will be easy to categorize. Many people are likely to be a mixture of 2 or more types and you should adjust your feedback approach depending on this. However, once you can recognise yourself and your team-members in the types outlined by Mooney, giving feedback (and receiving it yourself) will become a better process for everyone.

Playfuls are the people-people of your workplace. They’re full of enthusiasm, like to voice an opinion, and love to network. Playfuls are very creative and can always generate new ideas, despite probably being less structured and organised than other team-members. They most likely prioritise having a good time and enjoy working closely with others on projects, rather than alone.

Playfuls need to know when you’re happy with them and their work. Make feedback personal; these people will appreciate hearing that they are valued. They will enjoy hearing how their contributions helped the team, or that you would have struggled to achieve something without them. They will appreciate their creativity and enthusiasm being recognised.

Real-time feedback is likely to keep playfuls motivated and on-track. They’re the fast moving, often distracted extroverts of the workplace, so keeping feedback ongoing, short and snappy not only fits in with their pace, it keeps them motivated to continue their success, or respond to constructive comments in real-time.

Powerfuls are both very driven and great at decision making. They’re very pro-active and don’t shy away from hard work. Powerfuls aren’t ones to give up on their goals; they are very willing to take risks and will come up with solutions to get them where they want to be. They have a never-ending stream of goals and targets, and will truly exert themselves in order to achieve them.

They want: credit, loyalty and appreciation.

When it comes to receiving feedback, powerfuls probably won’t need quite as much of a personal touch as playfuls. They’re more likely to value clear-cut feedback that revolves around goals or targets. Whilst real-time feedback is always beneficial, they may not rely on it so much for workplace motivation as other personality types: they’re highly motivated already. Powerfuls are also likely to be very strong personalities, and show confidence in their work, so it can be useful for them to gain 360-feedback; it allows them to take a step back and view things from different perspectives. They’re likely to appreciate clear, concise 360-feedback that doesn’t distract them from their daily practices or goals.

Who are they: The precises are the perfectionists of your workplace. They’re very structured, organised and place high value on attention to detail. Like the powerfuls, they value work over play, and work not just very hard but very efficiently. Precises are planners: not ones for spontaneity or disorganized environments, and they probably work best to a tight, pre-planned schedule.

They  want: space, quiet and sensitivity.

Although real-time feedback is generally beneficial and will improve the performance of all personality types, precises prefer structured feedback like 360-performance reviews where all feedback is collected in one place. Using such reviews, perhaps on a monthly basis, is likely to be well-received as feedback will be grouped together systematically for easy-viewing. Like powerfuls, precises are likely to prefer concrete feedback relating to goals or achievements over more general comments about their working practices.

When following up feedback with meetings, give precises time to digest feedback. They prepare for everything they do, so giving them with feedback then looking to discuss it immediately probably won’t be so effective. They’ll likely need time to reflect before they’re ready to respond and act on it.

Peacefuls are very easy-going and patient. They’re the last to be involved in conflict or confrontation. Whilst they can sometimes be hard to read, peacefuls are very stable and consistent in their work and are usually appreciated by many for this quality, likely having good working relationships with those around them.

They need: respect, value and harmony.

Due to their laid-back nature, peacefuls are an easy lot to give feedback to. They are generally receptive and open. Comments about either their working style or their performance should be well-received. They may however initially find it difficult to give and receive constructive feedback due to the value they place on maintaining harmony. So when introducing a 360-feedback culture it’s key to discuss with them the perks of constructive feedback, and that when it’s given correctly, it often results in a more communicative, harmonious work environment.

It’s clear that personality play a large part in people’s working practices, and the way they impact feedback culture is no exception. It’s key to keep people’s personalities in mind and ensure the way you interact with your team is beneficial to everyone. 360-feedback culture means managers are also receiving more feedback. It’s important to be aware of your personality type and how it affects the way you respond to insights from your team.