How to Evaluate a Job Candidate’s Video Resume 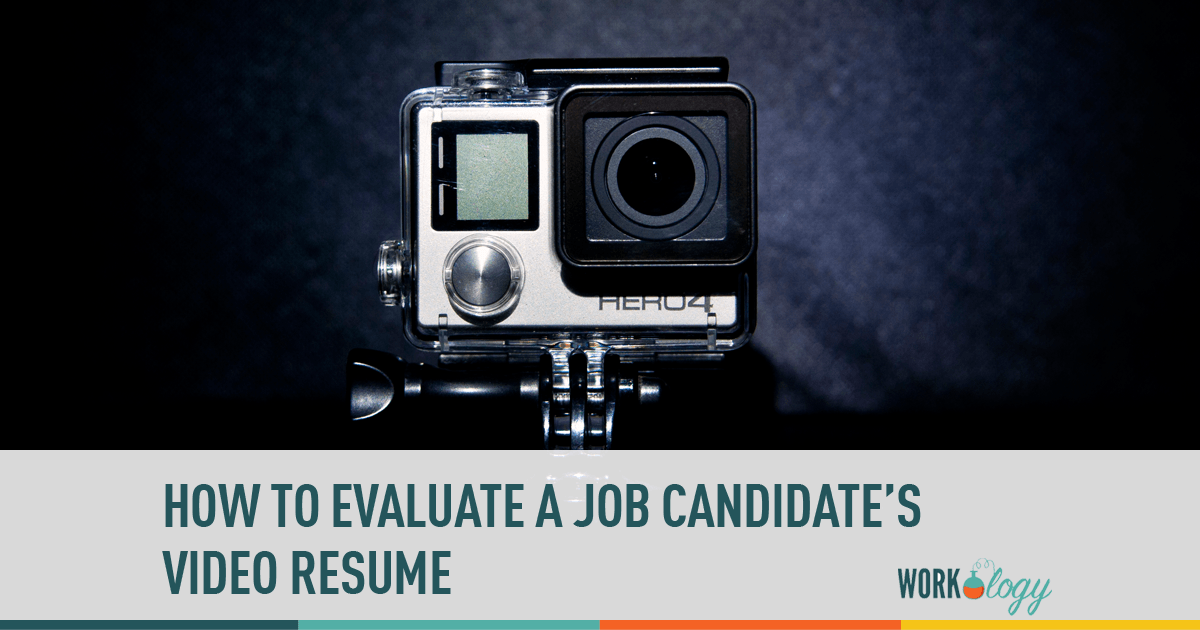 In today’s competitive job market, job seekers are using creative ways to get your attention. Creating infographic resumes, blogs, and video resumes are all becoming commonplace for job seekers looking for their dream job.

In fact, job seekers are being encouraged to create these visual venues for employers — and employers are adapting, as well. According to U.S. News, companies such as the nonprofit Music Saves Lives have already incorporated video introductions into their hiring and job candidate screening process.

How to Evaluate a Job Candidate’s Video Resume

So if you’re hiring in an industry where the video resume is becoming popular, don’t feel overwhelmed. Video resumes have their perks and are likely to show you more about a job candidate than a traditional resume would reveal. Just as in the traditional interview, there are ways to evaluate your job candidates’ video resume:

Long video resumes suggest a job candidate lacks good judgement. Video resumes as well as video introductions really shouldn’t be that long (1-2 minutes is ideal). If you’re watching a video that’s more than three minutes, this is a red flag. This suggests a candidate can’t concisely communicate his or her qualifications for your job in their video. They also may not be able to distinguish their important experience from the minute, and this reflects poorly on their professional judgement.

Reward creativity if it’s right for the job opening. The goal of most video resumes is to spark your attention and interest in the job candidate. This means you might see some creative stunts or scripts fly your way. Don’t always assume this to be unprofessional though. Did the candidate’s strategy send the right message? If so, what was that message? Depending on the job, you may want someone who is creative and unafraid to try something bold and new. But you can be the judge of that.

Avoid video resumes with inappropriate content such as poor humor, unfitting visuals, or too much personal information. Although job candidates are likely to get creative, make sure their creativity doesn’t get the best of them. You should obviously shy away from job candidates who use inappropriate props, humor, or visuals in their video resume. But candidates who drag on about irrelevant personal stories and anecdotes should also be a turnoff for hiring managers.

Again, this goes back to a candidate’s professional judgment. And if they aren’t using it well, they may not in the workplace either.

Look for professionalism in video resumes — quality lighting and video, appropriate dress, and an appropriate background all count. A professional video resume can come in all forms. Depending on a candidate’s budget or resources, they should have considered sound quality, lighting, background, and professional attire. Videos with most, if not all, of these qualities suggest a candidate is serious about how their personal brand is portrayed to employers. You can’t expect all the bells and whistles, but look for signs that the candidate is creating a professional atmosphere in their video.

In the end, hire for the job, not for the candidate. If you’re receiving five-minute long video resumes and introductions and just don’t have the time to watch them, then don’t. Send them back and suggest candidates shorten their videos in the future.

If you’re worried about how a candidate came off in their video, but their qualifications are great, don’t knock them out just yet. Video resumes aren’t right for everybody. But in the right setting, they can certainly serve as a looking glass into your candidate’s demeanor, personality, and sense of self.

What are some other tips to evaluating a job candidate’s video resume?