The Reason to Hire the Unemployable 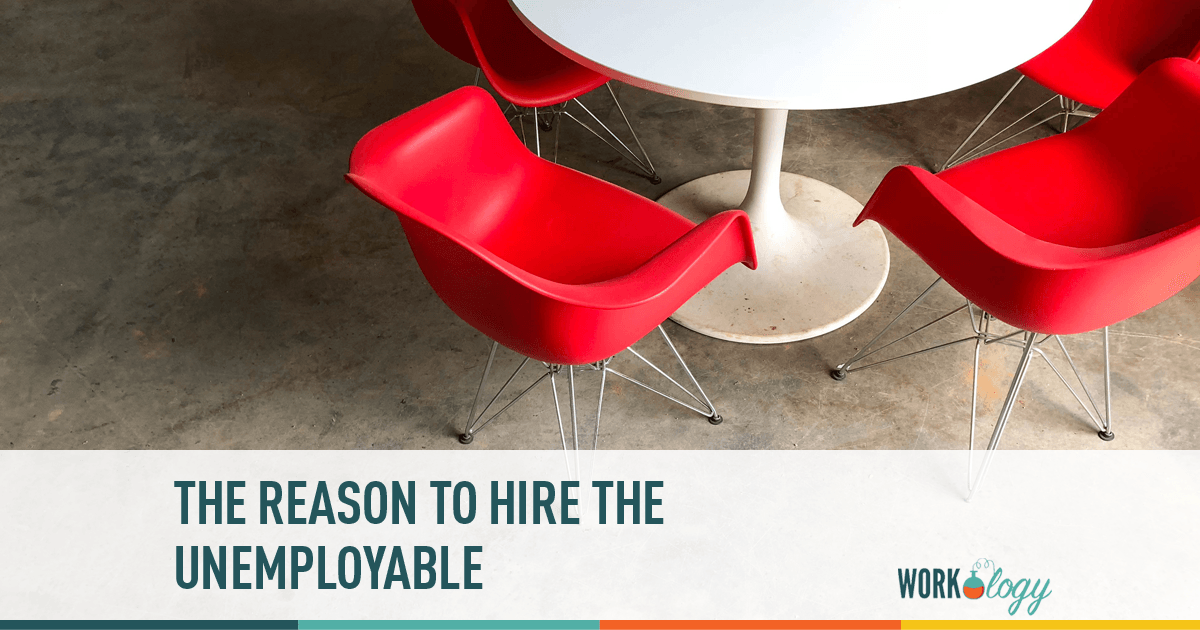 Join me in two weeks when I talk about 5 how-tos on hiring the unemployable in 2015.

The other night my husband and I were having a pretty intense conversation.  Well, it was more like Monica was having an intense conversation and my husband was doing the “try to get a word in” well…..you…..see…..Monica…..Please understand that when you have been with someone for 25 years the conversations no longer require boots.  The two of you are more than willing to save the bull and have a realistic conversation about what the blazin’ is going on with you on that particular day.  The years of listening to the unemployment statistics and stories, along with attempting to place candidates in personal time (with success) and professional time (with success) was really troubling me on this particular night.  Mainly, because there are so many to place with limited seats available.

I walked in the door, sat down at the table and started throwing these questions at my husband: Why are there so many candidates in the markets right now? Why are we placing so much demand for exact skillsets for each open job requisition? Why are budgets not being created for training the unskilled workers? Did a candidate that has been out of work for 2 years brain really atrophy and they are no longer able to do division and subtraction? How come these candidates are having such a difficult time finding a seat within an organization?  This went on for about fifteen more minutes (hey, I can’t help it, asking questions is part of my DNA).

I told him that there was a program on the radio coming home that evening talking about the unemployment rate, talking to unemployed individuals who had applied to several jobs but had given up after too many failed attempts to secure a full-time professional position. Several others simply opted out of the job market, as they were tired of “the dead zone” and simply are being caretakers or worst, fighting depression from a lack of purpose.  After several minutes, my husband started talking and during the first few minutes he mentioned how people who were working day in and day out, being slaves to corporate America, climbing the ladder, taking the crap, and working the long hours didn’t appreciate candidates coming in expecting to be in the same seat or higher when they had been out of work. They were non-verbally telling these candidates, “Get to the back of the bus!” Please understand that my husband hasn’t worked for a company since 2009.  He was part of the downsizing at his company and decided to move into entrepreneurial work investing in his own company.  He clearly understands that if his business doesn’t work out that he will be sitting in the back seat, along with everyone else.

Fortunately, in my volunteer work and professional recruiting role, I have assisted several folks with finding them a seat within organizations.  And my husband is right; candidates are applying for lower level seats within organizations in order to find employment.  Do you think there needs to be a compromise between the candidate and the employer?  Should there be a special division within organizations that interviews the unemployed candidates?  Would it be possible for companies to partner with their local chambers and universities to help create a re-entry program that builds these individuals skills or keeps skills up-to-date (probono) in order to put them back to work?  Do you think there needs to be several companies in each city creating an organization that prepares the unemployed for re-entry into the workforce?  I could keep going on and on with the questioning, but will stop the soap box at this point.

My only wish this Christmas is for you, HR Practitioners, to make it a #1 priority to really focus on the unemployed candidates that are coming to your doorsteps in 2015.  Please design and develop solutions that afford these candidates the opportunities to get back in the game.  We have such an opportunity here to tap into a professional pool that is eager and ready to work. I have been very successful this past year in placing several of these folks.  They are doing a really nice job and have received positive feedback from managers.  I will leave you with this quote, “What we do for ourselves dies with us.  What we do for others and the world, remains and is immortal.”  We don’t need to reach for the stars when the daises are within our reach.  I say create a wonderful bouquet of “eager and loyal” candidates within your pipeline this next year. Let’s create those seats within the bus that is a compromise between the candidate and the employer.

I will leave you with this personal experience of my re-entry into the workforce.  I was one of the candidates, six years away from a full-time position.  From 2006-2012, I spent those years raising our son.  Upon returning to corporate America, I accomplished the following for a CEO of a small company in the first year back to work.  #1 Recruited Psychiatrists, Nurses, Social Workers, Counselors, and corporate managers and executives, only spent $100 on recruiting fees.  #2 Designed Newsletter, Co-Edited, #3 Opened Markets – 2 in spare time, Iowa and Arkansas, 5 total new partnerships. #4 Managed Projects – in spare time.  It is amazing what one person can accomplish when someone believes in them.  My CEO believed that I could handle whatever he tossed my direction.  And because of his belief in my abilities, I performed every single time.  And by the way, we did compromise on my position within the organization.  Once my performance was proven “again”, I received a significant raise and title.

Make sure to join me in two weeks when I talk about 5 how-tos on hiring the unemployable in 2015.