How to Combat the Death of Any Industry Including HR 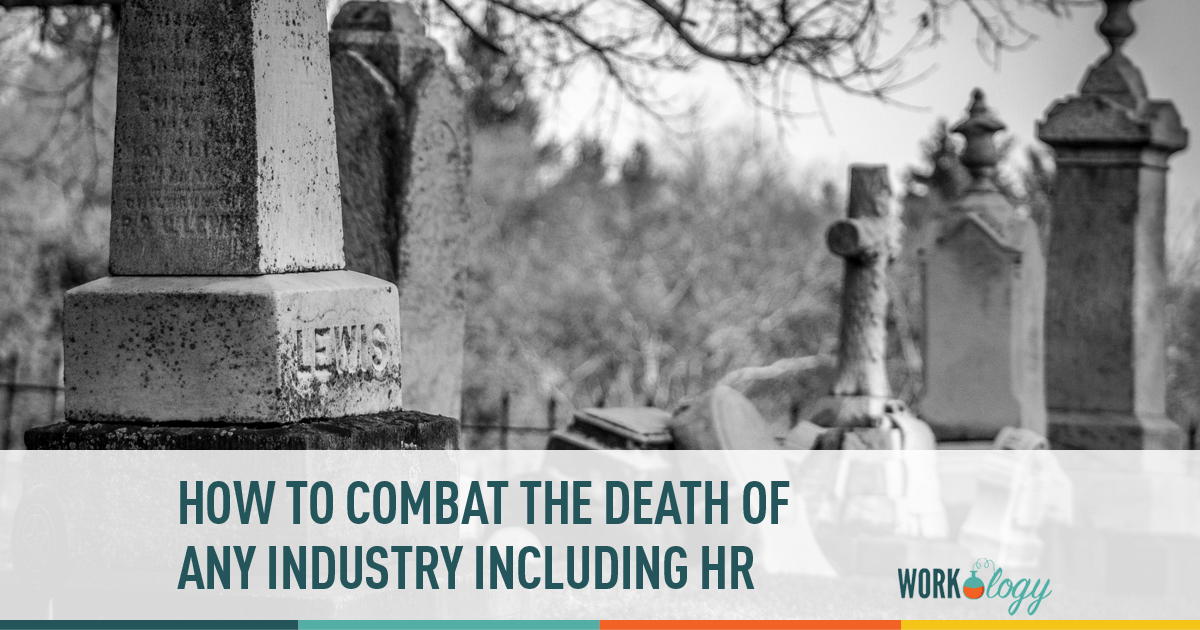 How to Combat the Death of Any Industry Including HR

I just finished reading a story about the future of a paper mill in Madison, Maine. I had no reason to be reading this, I am not in that industry, I don’t know anyone in the industry, but there was a secondary headline that caught my eye as I was browsing. It read “Concerns remain about the long-term future of the mill as workers come back after a two-week layoff.” I thought that is a line that may be said about a good number of industries, companies and even jobs. Technological changes, changes in our habits, wants and desires are going to drive the demise of industries and jobs.

There are a number of industries in danger and many of them are connected to the paper business. The troubles at the Madison mill are tied to the newspaper business, which itself is in trouble, mostly due to technology and changes in people’s habits. People don’t buy newspapers anymore. As I write this sitting in a Starbucks the newspaper rack remains untouched while people consume their news on their phones, tablets and laptops. Newspapers are trying to reinvent themselves as digital but they are still so tied to paper that my local newspaper requires that the paper version be delivered in order for me to get the digital version. I guess they are trying to preserve jobs, but that strategy will only work so long. Technology, in the form of robots is even displacing many reporters.

My wife worked in the envelope business for 25 years watching the business slowly diminish. Technology has greatly diminished the need to use an envelope for anything, hence fewer envelopes printed and thus another hit on the paper industry. What other industry has this technology had an effect on? The woes of the US Postal Service are well known, but they did a bit of reinvention this past holiday season and contracted with FedEx and UPS to help with package delivery.

The impact of technology

I could go on about the paper industry, but that is not really the point of this post, it is just a convenient example. Technology is going to have a major effect on many businesses, businesses that will need to recreate themselves or die. Your business may be one of them. Are you paying attention? If not we may be reading a headline for your business that reads “Concerns about the long-term future….”

What can be done?

HR cannot drive the solution by itself, but it can play a part. First HR can point out trends that perhaps no one else has seen. HR can work with industry groups, community groups or government agencies to help companies transition to new areas, even totally reinvent itself as a new product producer. The community of Madison, Maine should be working with the paper mill to see what else could be done in order to keep workers employed and living in the community. Or they need to think about retraining the workforce in order to be able to attract another company as a replacement for the mill.

The point of this is rant is that HR can and should play a role in the survival of its company and industry rather than being a passive player in its demise. So if you work in a dying company or a dying industry what are you doing about it?