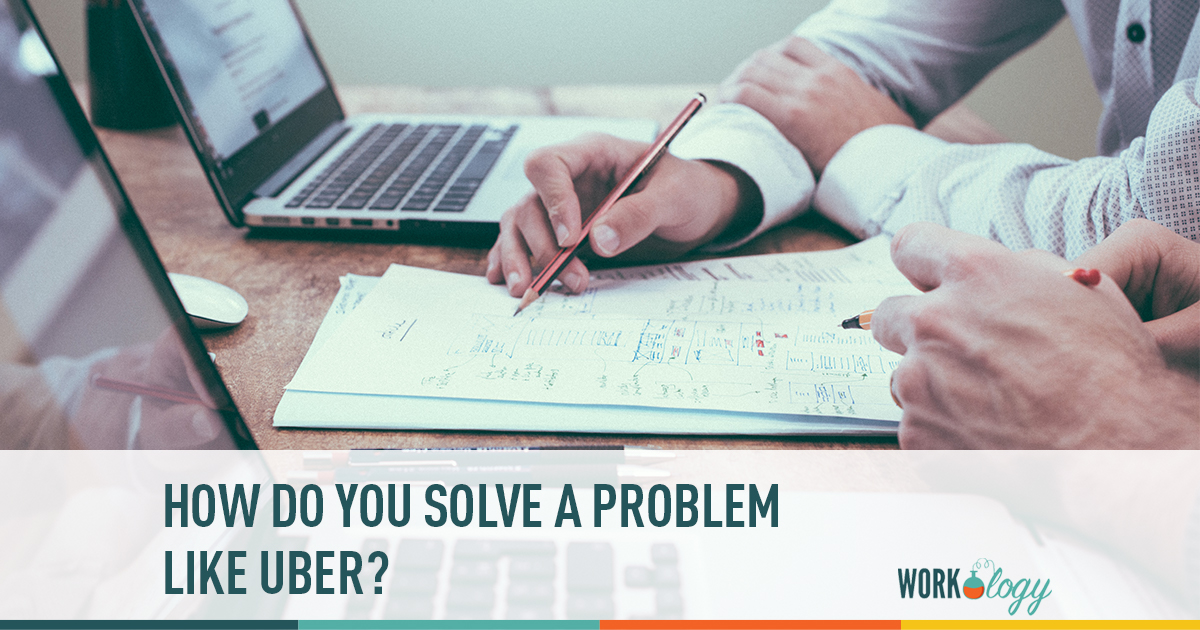 This morning the New York Times’ business and financial news headlines are dominated by Uber stories. I at least glance through the business section of most major papers in the morning and it gets boring after a few sites, since the major stories tend to be the same across the NYT, Wall Street Journal, Washington Post et al. But every once in awhile something isn’t just the top story at all the top news organizations, it fully dominates the business coverage for the day. Here’s what the NYT business section looks like today: 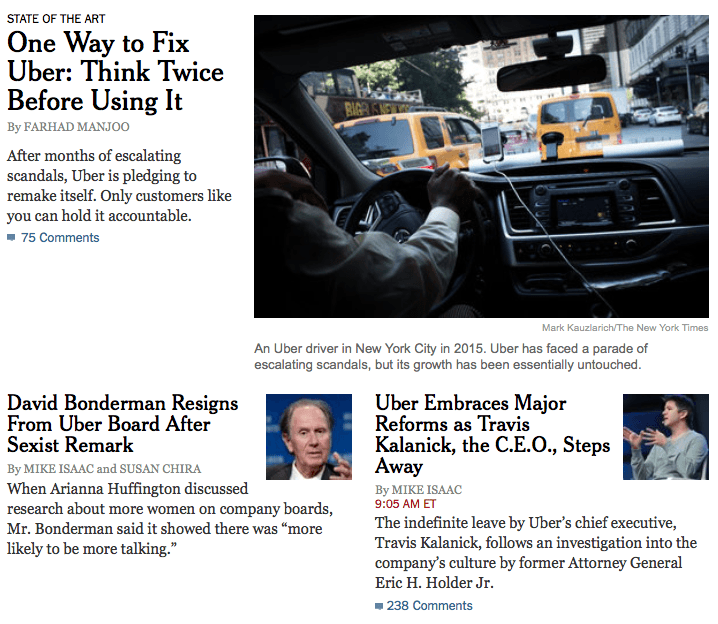 Looks like Uber is having another bad day, as the ride-sharing company loses both its CEO and one of its top board members. But it’s a well earned bad day in a series of bad days. This news a surprise to no one — I think many are more surprised that Kalanick held on as long as he did, making half-hearted apologies for verbally abusing a driver, dismissing the company’s culture of sexism and harassment, and failing to take action on the internal dysfunctions that have led to the company being sued by former employees. But Kalanick is taking an indefinite leave, not quitting outright, a decision which is emblematic of everything he’s done as a business leader, since the first Uber scandal broke: evade, distract, and move on without addressing or facing his company’s problems. The fact that he’s “stepping away” on the same day that an Uber board member has resigned after being caught out making sexist comments just emphasizes the complete Uberness of the situation, how very to type it is. Kalanick has no trouble issuing apologies but quite a lot of trouble with actually fixing things.

But how do you solve a problem like Uber? It’s no longer a new company, having long since grown past startup size to a major transportation and delivery player that’s embroiled in market and legal challenges all over the world. The company’s culture, known for being a sexist boy’s club as well as uncompromisingly focused on growth, is by now entrenched. It’s difficult to effect change in an organization where unfairness, unprofessionalism and employee mistreatment has been baked in.

The change can’t come from HR, since we already know that Uber’s HR was hamstrung from the start, both without the power to champion business ethics and culturally biased in favour of protecting managers and business leaders over employees.

The change can’t come from existing leadership either, since we know that multiple execs have been implicated sexual harassment, underpaying female employees and numerous other scandals. We know too that David Bonderman is not the only Uber board member who facilitated the company’s dysfunctional culture.

And finally, we know that change can’t come just from Uber employees advocating for change. Both because we know previous scandals that many employees are part of the problem and because the ones who aren’t, aren’t being heard.

The only kind of change that has a chance of working at Uber now, is drastic: the company needs new leadership. Some board members have already been swapped out — the company started doing this early on, thinking the optics of a board shuffle would convince us that change was really in the offing. Uber has also made flailing motions toward an action plan, the specifics of which have always been vague and uninspiring. So much so that even the PR aspect of Uber’s problems has become untenable. Uber couldn’t get good press if they closed their doors for a day to rescue kittens up trees and kids from traffic. But if the company is to survive and grow — I’ll make no comment now on whether I think it should — it will need new board members, new executives, new team leaders, and most importantly, a new ethos.

Uber needs to want to change. But with the company culture so assuredly toxic and institutionalized, whoever takes on that challenge will have a lot of work ahead of them.