Guac is Extra and Other Stupid $@*% People Say 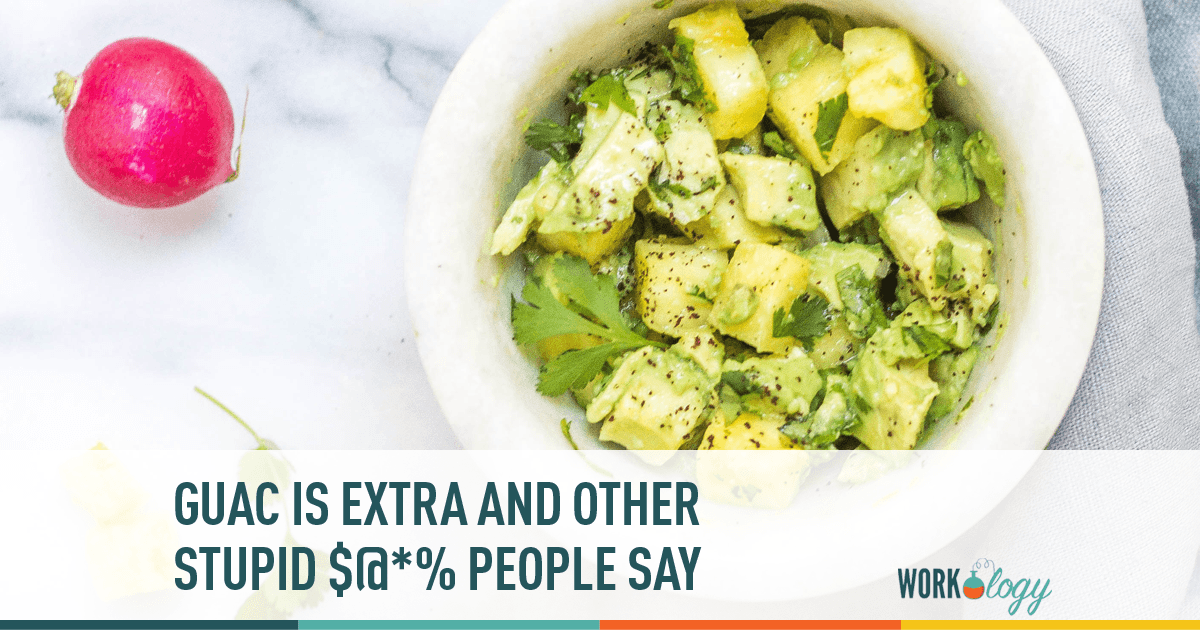 On any given day at a popular Mexican themed fast food joint you will hear one of the servers proclaim, “Guacamole is extra.” in a seemingly condescending, less than polite tone.  The customer responses can range from blank stares, subtle head nods, follow up questions of “How much extra?”, or some colorful way to say “I know and I can afford it!”.  Having been on the receiving end and/or witnessed this exchange on countless occasions, I began to wonder if the cause of this dialogue is less offense and more a thoughtless adherence to some corporate script.  I reflected on the fact that in an office setting there are similar snarky remarks that can be construed as passive-aggressive venom when the intention is mindless small talk.

Excluding the language wrapped in racial, gender specific, religious, cultural, and political themes that can be offensive, I’ve compiled a list of some of my favorite “bad words” broadcasted in break-rooms and common areas every day.

Like others who have a PhD in profanity, I consciously refrain from haphazardly stringing together melodious choruses of f-bombs, sugar-honey-ice-teas, and/or {insert adjective} another word for donkeys in certain settings. So, I wonder why the aforementioned assaults are not given the same consideration. While it isn’t socially or professionally acceptable to weave a “monsterfeather” into the conversation no matter how natural if feels; I accept that, “Wow! I didn’t know you could speak so well.” is preferred to, “You’re presentation was f’ing awesome!”, despite the fact that the latter is rather flattering. If you feel you are leaning toward a comment or question that you know has double meaning or is intended to get a negative reaction, try applying what I like to call The Morgan Freeman Rule.  Picture him saying what you have queued up and if it doesn’t sound cool in Morgan Freeman’s voice…imagine what it sounds like in yours.