That Google Manifesto Sums Up Everything Wrong with #Diversity 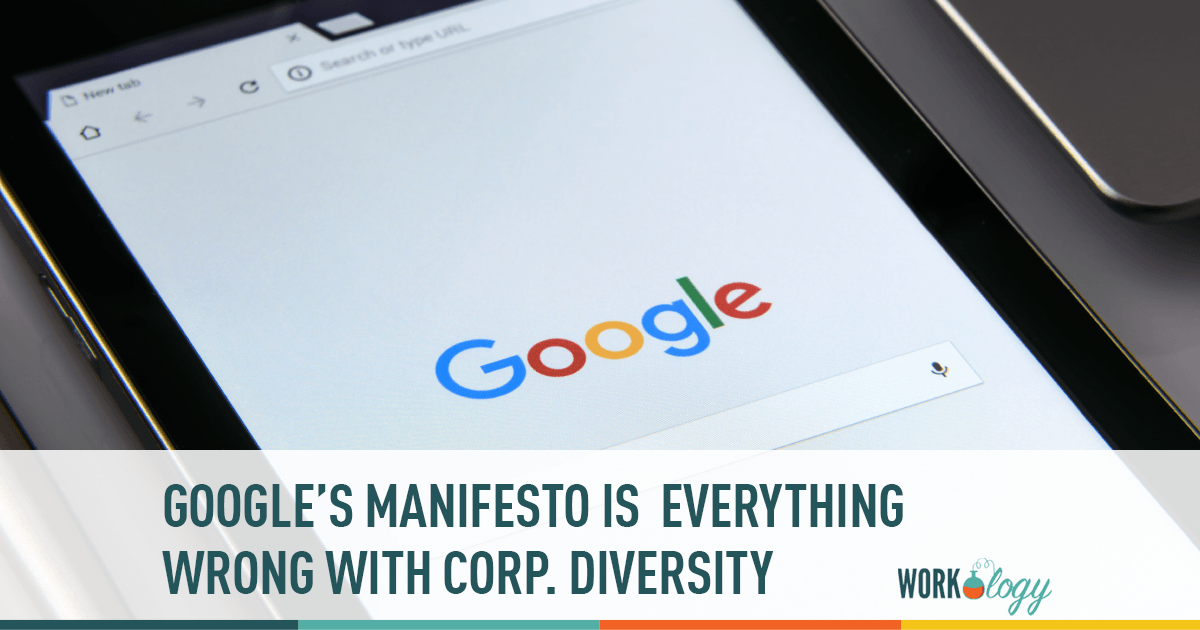 Help me get to SXSW in 2018 to lead a 2 hour workplace on diversity and inclusion. Click here to vote for my workshop titled, “Neurodiversity, Universal Design, and Inclusion @Work.”

First, let me just preface I’m really tired of writing about Google, but here I am writing about them because an employee wrote a very detailed 10-page manifesto which was circulated internally on the subject of diversity at Google until it was published on the tech blog, Gizmodo on Saturday. You can click here to read the original article.

I am not surprised at the opinions in the manifesto, memo or however you want to refer to it. For me, it provides a pretty succinct summary of a point of view that unfortunately, many in not just technology but in the workplace and organizations have when it comes to diversity.

These people fundamentally don’t understand diversity, its value or even the federal and state employment laws like Title VII and not to mention OFCCP requirements for companies like Google that are federal contractors.

Why This Google Engineer Is Just Like Most Employees… Clueless

The manifesto supports my point of view, which I’ve spoken about at length, that people outside of human resources don’t get employment diversity or even the basics of employment law. These employees, leaders, and managers are left to make assumptions of their own devices which leads to a memo like this one. I imagine the water cooler talk that’s happening not just at Google but other places in Silicon Valley and beyond where employees are misinformed and misguided, not fully grasping the federal and state employment requirements or even the basic foundations and benefits of an actual diversity program.

To the author of the Google Memo and others like him, I want to highlight a few important considerations regarding diversity at organizations:

#1 – Protected Classes Are Protected For a Reason

In the U.S., diversity generally falls into what the Equal Opportunity Employment Commission (EEOC) defines as a protected class. These protected classes include individual workers who are protected in the employment and hiring process under a number of federal U.S. employment laws and include the following groups:

If you are a federal contractor like Google, there are additional requirements for a ninth protected class for organizations – veterans and current military staff.

#2 – Diversity Isn’t About Morality or Politics

At a foundational level, diversity isn’t just about being morally right or being left-winged or right-winged. It’s a federal requirement that an employer to hire, promote and pay employees for their work without discrimination, and if disparity is found, companies are obligated to seek out ways to eliminate those disparities which can be a number of programs including mentorship, training and focusing on hiring those who are diverse in order to eliminate such disparate impact among a protected class.

Google’s current lawsuit with the DOL is a fine example. The DOL believes that Google engineers who are women are not being paid at the same level as the rest of their peers. The lawsuit in question is currently in progress, with Google failing to provide the DOL wage and salary information of certain groups of employees.

Contrary to the belief of the Google Memo author, unconscious bias is a real phenomenon. I, myself have been part of several EEOC investigations and lawsuits where it was found that a form of unconscious bias existed in the hiring, performance management and compensation of employees. Let me just say that it wasn’t a fun process, evaluating 7 years of all employment records to determine if there might be a hidden pattern of bias. In several instances there was, and the company I was with immediately settled out of court. The EEOC has a tough stance on unconscious bias and with the recent lifting of the federal hiring freeze, I anticipate that the EEOC will be spending even more time in this area.

If I could speak with Google’s Memo author, I would point them directly to the case of Dukes vs. Wal-Mart for evidence as well as a definition of unconscious bias. I might also point him to a recently published study by the Harvard Business School by Audrey J. Lee. Her article discusses a Massachusettes Institute of Technology and the University of Chicago study that sent out over 5,000 resumes in response to help-wanted ads in Boston and Chicago. The economists randomly assigned white-sounding names as well as African Amerian names attaching them to identical resumes. Applicants who had white sounding names received 50% more callback interviews than those with African American-sounding names. Yes, Virgina unconscious bias does exist. It’s not fake news.

What’s Next For Diversity

These three points  were, for me, the most important to address. But, there is another bigger problem than people just not understanding employment diversity – which is that employees like the Google manifesto guy are a dime a dozen, and I don’t mean that because he is an engineer. If this guy is an average engineer, he’s like liquid gold for companies like Google.

These employees simply don’t understand diversity hiring, retention and development programs at companies, and they make it harder for people in HR and leadership to develop and maintain these programs.

This is why I’m hoping to present at the 2018 SXSW conference on the subject of diversity and inclusion in the workplace. While we will discuss diversity overall, we will discusses some of the less understood protected classes, as well as accessibility and universal design. Click here to vote for my workshop titled, “Neurodiversity, Universal Design, and Inclusion @Work.”

Obviously, this topic will continue to drive discussion and for that I’m glad. Hopefully, the memo author who was terminated from Google for his published opinions and the bad PR, as a result, will drive not just change in the technology industry but all workplaces.