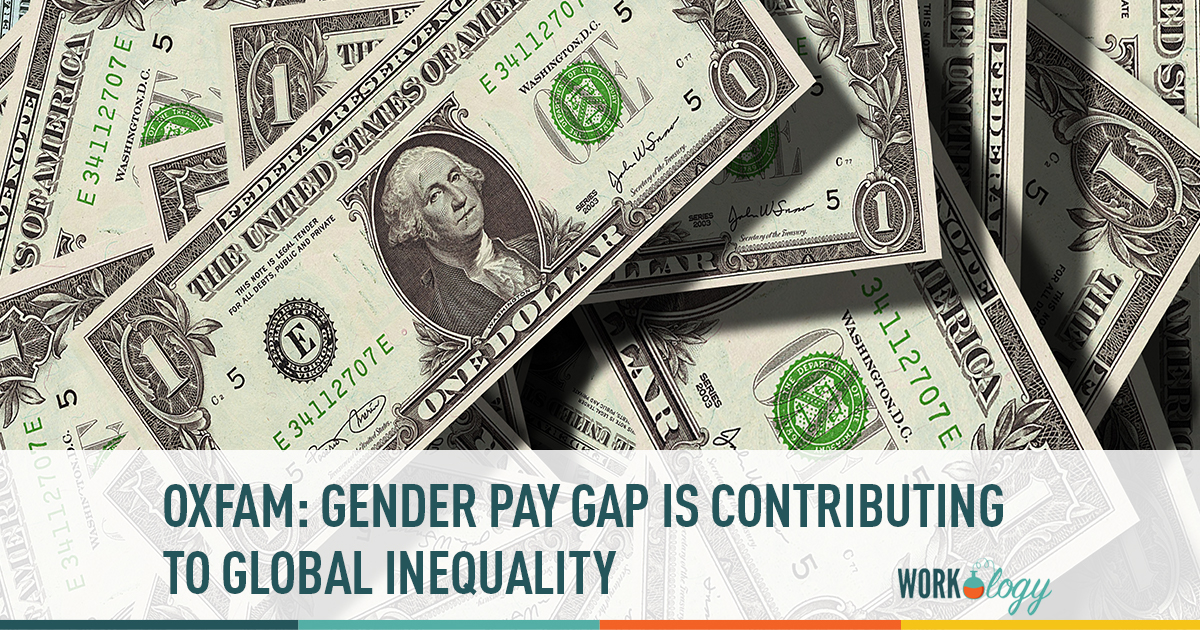 A new report from Oxfam Canada suggests that the gender pay gap is contributing to growing inequality. While the pay gap varies from nation to nation, and between women within nations, not one country has fully closed the gap — and in some countries, including Canada, the gap is actually widening. In 2011 the pay gap widened from 74.4% (earned vs what men earned) in 2009 to 72%.

“There is not a single OECD country where women earn more than men. Even in the country with the smallest pay gap, New Zealand, women still earned 5 percent less than men in 2015. According to the International Labour Organization, on current trends it will take 75 years to make the principle of equal pay for equal work a global reality; the World Economic Forum estimates it will take 115 years.”

According to Oxfam, our inability — or unwillingness — to deal with the problem is both a cause and symptom of inequality generally. The story of the pay gap isn’t just the that women continue to be largely excluded from top executive and other high-earning positions, but that women have lower lifetime earning potential, are less likely to get raises, do more unpaid labour in the home, and are more likely to work for minimum wage.

And while the gender pay gap is comparatively small (though at 20-30% it’s not really small) in Canada and the US, it’s much wider in countries where women are excluded from the formal economy, and the formal economy, which employs billions worldwide is growing rapidly.

Women Are Overrepresented in the Informal Economy

The global informal economy is only growing. Last month the world’s largest general strike happened in India. Workers were protesting poor working conditions, a minimum wage that’s far from a living wage, and unenforced labour laws. Their protest was complicated by the fact that 96% of workers in India are employed in the informal sector, where laws don’t apply. But the protesters stood in solidarity with them — since informal work is growing far faster than formal work in India, they had to. Informal work is growing just as fast in many other developing economies and represents a huge portion of their GDP. This report, which Oxfam cites in their own research, points out that informal trading — street vending and related activities — represents as much as 40-90% of overall trade GDP.

Women employed in the informal sector are making huge contributions to their country’s economy, but they aren’t being fairly compensated for it.

“Regulating private sector labour practices can help ensure that normal business operations reduce inequality rather than intensify it, even in the informal economy. After a decade of campaigning by advocacy groups, Thailand enacted the Homeworkers Protection Act that mandated fair wages, including equal pay for equal work, while obliging employers to provide a contract and meet occupational health and safety standards. The law also gives workers access to the courts in labour disputes and provides women with a venue for bringing concerns to employers.”

Organizations like Women in Informal Employment: Globalizing and Organizing (WIEGO) are working to bring together and support women in the informal economy, but there’s more to do.

Though many top GDP countries have taken measures to close the pay gap with initiatives such as parental leave, it’s clear that without stronger protections gains can be easily lost. The widening gender pay gap in Canada should be some not-so-tasty food for thought for business and political leaders. Closing the pay gap and sustaining it must be about more than benefits and getting women into top executive positions. Unprotected women laborers need aid too. Women in the informal sector make up a huge swath of the world economy — their work intersects with and supports those of us working in the formal sector. Real pay equality will require a deeper understanding of how women in the workplace are marginalized and how their labour is devalued.