Forgiveness in the Workplace 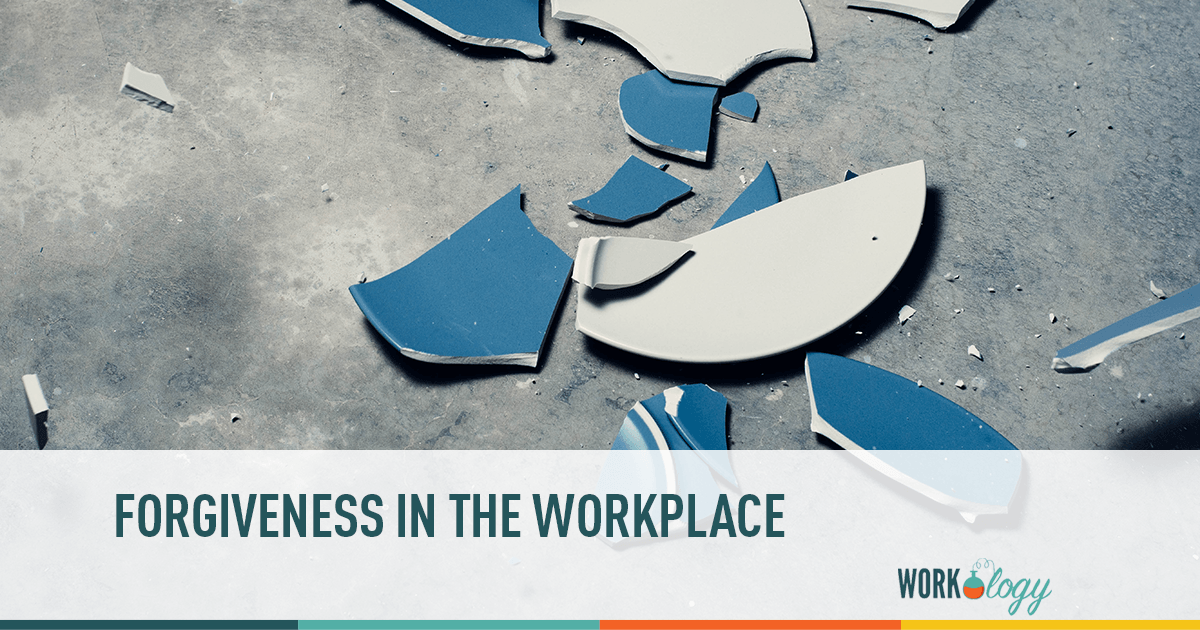 As I was growing up, I was taught forgiveness as a moral obligation, mostly in a religious context. For a very long time, the way I understood forgiveness is when people do something wrong, we’re supposed to forgive them. And, when we fail to do so, we’re no better than the wrongdoer.

I’ve since learned this isn’t exactly how forgiveness works, nor is it the only reason we should practice it. If I forgive only because an external authority like a parent or God might be displeased, it’s likely my forgiveness isn’t genuine or sustainable.

Also, I now know forgiveness is more for the victim than for the perpetrator. We don’t have to relegate forgiveness to an exclusive, external-facing religious context. We can also aim it inward as a clarifying component of our personal ethical framework.

Forgiveness can relieve anger and other distractions to enable you to accomplish more, which is very appropriate for the workplace.

If you’re holding a grudge, you’re using up valuable creative space and energy you could otherwise use to create value for your company. Whether you run the company or you’re its most recent hire, the formula is the same even if the scale is different.

It’s human nature to cling to indignation and anger. Especially when we know we’re right and we’ve been wronged. But, resolving injustice isn’t the point of forgiveness.

There’s an eastern metaphor called the “second arrow.” Simply put, being wronged is the first arrow, and retaining anger over the wrongdoing is the second arrow. Your anger causes you to be hurt twice.

Avoiding the second arrow is the equivalent of the western concept of forgiveness. You don’t have to allow your anger to hurt you a second time, and with practice you can control your reaction and stop it before it even gets started.

Forgiveness in this context is about providing extra room for you to be creative and productive rather than shrinking your operating space by being angry and bitter.

Throwing the baby out with the bathwater

Most religious and spiritual subjects are taboo in the workplace, even though those traditions have been the primary vehicles for ethics for most people for millennia. Few know of any other mechanism for the essential rules of social engagement.

However, I have noticed that most people aren’t as concerned about discussing ethics as much as they want to know by whose authority those ethics are being selected and prioritized.

Sadly, it is these arguments over religious authority and supremacy that have made the entire subject inappropriate for the workplace. Without an agreement on a central authority, conversations about ethics without some religious connotation have been all too rare.

But, all of that is changing. Decentralized, peer-to-peer systems continue to rise in every aspect of our society, especially in the context of social relations.

Crowdsourcing is now mainstream, and even though we might continue to eschew religious discussion in the workplace, group discussions about many ethical subjects, including forgiveness, are very appropriate. And, thankfully those discussions are happening more and more.

Empathy on the rise

Last year I visited with a friend who, in addition to being a very spiritual person, is also a privacy expert and a lawyer. She’s been giving public speeches her entire career, but told me she got butterflies prior to giving a speech about ‘forgiveness and business’ at an industry conference.

She was surprised at first, but then realized she was talking about something most people don’t talk about in the context of business. And, she simply didn’t know what to expect.

I was encouraged to hear that the response she received was great. Members of the audience approached her after her talk to thank her for raising such an important subject that’s so rarely discussed.

The feedback she received on that day and since then has convinced her that people crave authentic conversations about interpersonal behavior in the workplace, as well as other topics traditionally relegated to the emotional and spiritual realm.

For me, her story reaffirms the fact that there’s an untapped source of human engagement and creativity sitting idle, which can reduce workplace distraction and increase corporate profit. And, empathetic actions like forgiveness represent a bridge to that source.

A powerful tool to get things done

There are offenses large and small, acts of omission and commission, personal and institutional wrongdoing. In business as in life, there will never be an end to things about which all of us can become and remain angry.

But, clinging to anger at work can cause production inefficiency, project slippage and loss of profit. It’s the second arrow – you’re wronged once, then you (and your business) are victimized again by your anger.

Forgiveness enables you to dispense with the second dose of pain. It empowers the individual and the larger organization by providing clarity and liberation from time and profit-sucking distractions. Forgiveness empowers you, not the instigator of the bad deeds.

To be clear, I’m not suggesting we should all roll over and play dead. There are times when sound business practice simply dictates action and reaction.

If a patent or copyright infringement occurs, you give notice and protect your assets. If a competitor lies about you, they should receive an immediate order to cease and desist. You do what you have to do in business to ethically make a profit.

But, you don’t have to pile anger on top of action. That just slows you down and clouds the issue at hand. And, there are times when there is no business reason to respond to offensive behavior at all.

Luckily, forgiveness doesn’t require a lot of education or training. It just takes practice. Most all of us were taught the value of “letting things go” at some point in our lives and are reminded of it almost daily through popular culture.

But, like many behavioral habits, dispensing with anger or even indignation or envy, ultimately requires nothing more than the decision to stop. It doesn’t require a lot of resources or education. It really only requires the power of will.