FLSA Changes and What #HR Needs to Know #SHRM15 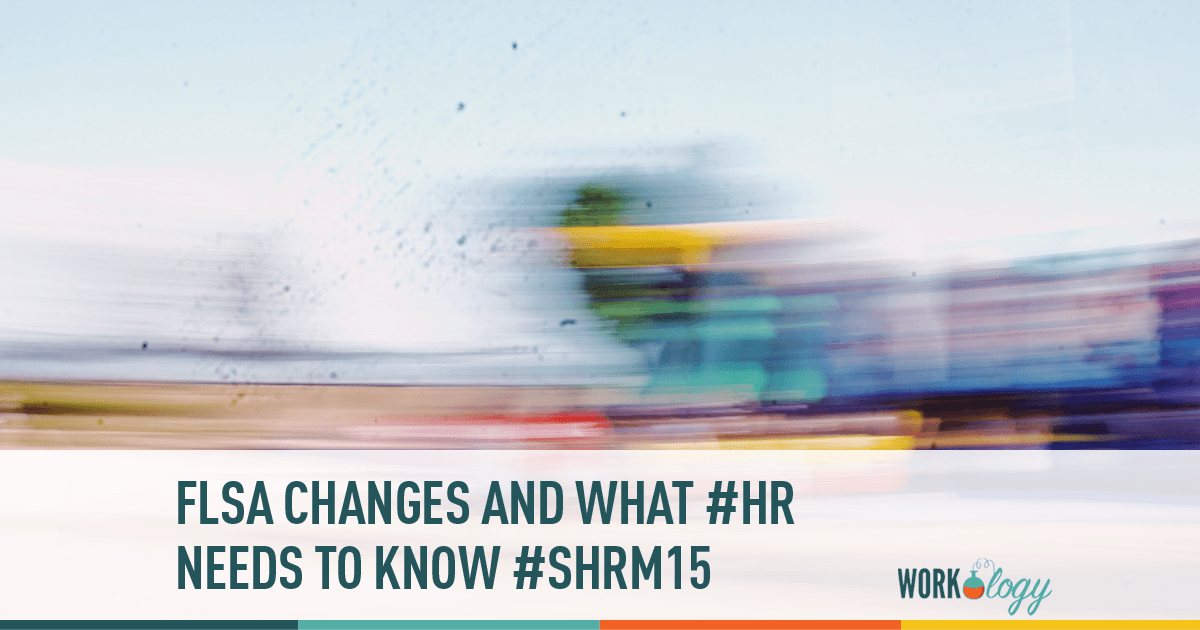 Before reading this blog, you might want to take a look at Mike Haberman’s blog on Exempt vs. Non-Exempt employees to understand these proposed changes to exempt employees.

Earlier this week the Department of Labor officially proposed changes to the Fair Labor Standards Act (FLSA) in terms of the amount companies now must pay exempt employees in regards to overtime. There are a lot of questions about what this means, when’s it going to be implemented, who it will affect, and much more!

Not being legally minded, I had the opportunity to sit down with Tammy McCutchen, previously the Administrator of the Wage and Hour Division at the Department of Labor, where she answered all my questions while I learned a lot about the new changes. I may have even geeked out a little hearing about the history behind the changes and the fact that we haven’t raised the wage for exempt workers since 2004 and before that it was 1975. The fun thing was that Tammy was the one to walk through and help get these changes passed in 2004.

The Obama Administration is proposing current changes to the minimum salary level for exempt employees and is deeming it “Giving America a Raise.” Before these proposed changes, the minimum salary was $23,660 a year which meant exempt employees (generally your retail and restaurant assistant managers and above) were required to make at least that amount. Under the proposed changes that amount would more than double to $50,440.

Why is this a problem?

Think about it. Currently in California, one of the most expensive places to live, the state standard for exempt employees is about $37,000 (ish) raising the federal minimum to $50,440 (which historically, California’s state minimum has always been higher than the federal minimum) is like taking a $12.25 minimum wage job and applying it in Oklahoma. I’ll be the first to say that living in Oklahoma and making $50,440 is pretty good money. Taking that same amount and living in California is a different story and you won’t be living in San Francisco anytime soon. Do you see the problem?

How long will it take for this to become effective?

Here’s what’s happened. There has been a proposal submitted and the Department of Labor now has to give the public 60 days to review. In 2004 when the public reviewed there were over 1000 submissions according to McCutchen and it took 13 months after the final proposal. McCutchen believes that this time around it’ll be 6-12 months due to the change in administration and the fear of a Republican winning and undoing everything that’s been done. The guess on the effective date will be July 1st of 2016.

How will this affect YOU, the practitioner?

I saved the most exciting part for last! Every HR practitioner out there who has exempt employees has a lot of work ahead of them. Especially in states where the state minimum is pretty much on par with minimum wage and the cost of living. As I talked about before in states like Oklahoma where the new minimum for exempt employees is $50,440 that is going to cause some businesses to have to reclassify exempt employee status on a large scale.

The estimated cost of this move is set to be about 2 billion dollars and will hit compensation the worst. Every HR department is going to have to take a look at every single one of their exempt employees and debate if they should reclassify or not. For those employees who are eventually going to be reclassified because of this change employers will have to start asking themselves a new question.

Will your employees who used to work fifty hours a week be required to get their job done in forty? This could put a strain on the relationships with employees and possibly affect turnover and the culture at the company.