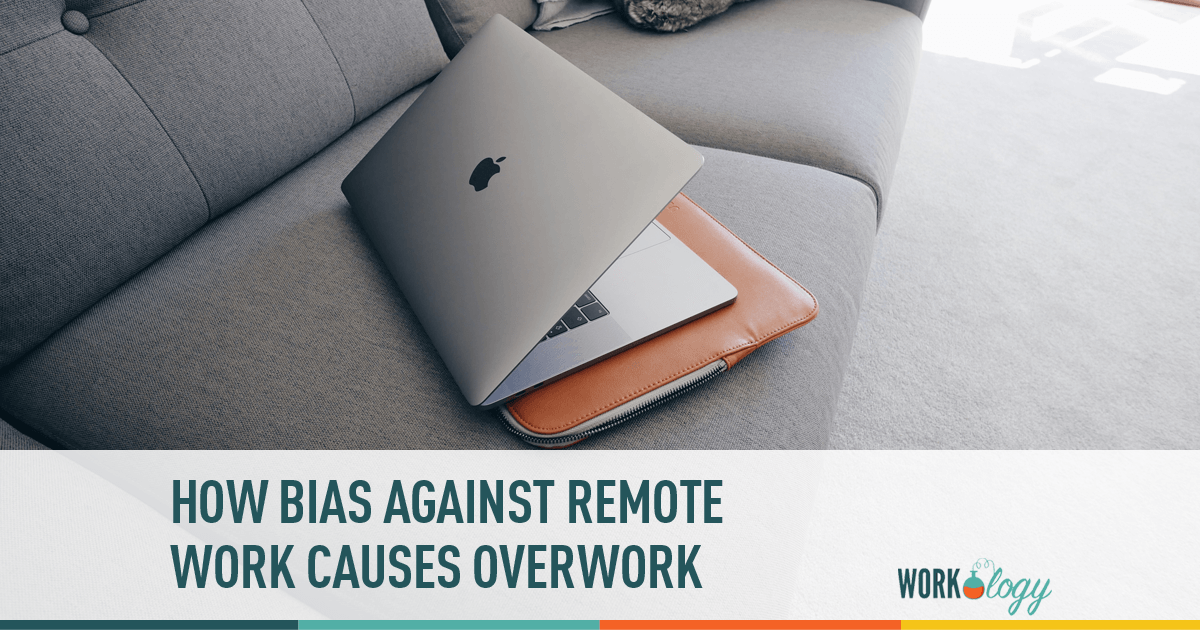 We’ve talked about the flexibility gap – a difference in quality of life between those who can and cannot work from home, which will widen over time if trends about remote work and the elimination of non-creative work continues.

Researches are now talking about flexibility stigma – the bias against remote workers that causes them to work even harder to prove themselves. While studies show that remote workers aren’t slackers – in fact they frequently display equal or higher levels of productivity as compared to their non-remote colleagues – there is a persistent perception, particularly in environments where remote work is less common or reserved for a particular group of workers that remote workers have it easy and are taking advantage of their position.

The stigma comes from what researchers are calling “the norm of work devotion;” that cult of all-or-nothing careerism that makes the quality of your work, and the amount of time you spend at it, your defining quality. The norm of work devotion is what’s behind that niggling feeling that you will be penalized – somehow, somewhen – no matter how flexible your company culture, if you decline overtime, take your full vacation time, or even leave on time. It’s behind your reluctance to work from home just one more day this week, no matter how sick you are. And it’s behind your suspicion that people who always leave on time might not be working hard enough; that people who don’t work from lunch aren’t stressed enough.

Recently we’ve seen some withering away of the stigma, especially in tech, as more and more people work in part or fully out of office. The Atlantic, citing the Survey of Income and Program Participation, says that 13.4 million Americans are now flexible or fully remote workers. Those jobs tend to require a high level of education and they pay well – remote working is good for workers.

It’s good for employers too, if they get the alchemy of remote team management right, because those remote and flexible workers work hard. But remote workers who are fighting against ingrained flexibility stigma, tend to work even harder, late into the night and well putting in well over 40-hour-weeks. The work life balance that flexible work promises thus gets erased – you may be working from home, but you’re always working and never really home. Overworked and overstressed workers are less productive in the long run, whether they’re working in office or remotely, which means both the norm of work devotion and flexibility stigma have got to go.

Speaking to Rebecca J. Rosen in the Atlantic, Joan C. Williams, director of the Center for WorkLife Law at University of California, says that one of the barriers to changing the norm of work devotion is that “It’s an identity-threat situation; they have an incredible amount invested in proving that’s the only way to be a professional. Because, if it isn’t, why did they do it? How come they don’t know their children?” On it’s own, work devotion isn’t bad. Caring about your work is good, both for your own career prospects and for the company. But taken to extremes, when work devotion eats away at other aspects of your life, keeping you from family and friends, it’s tipped over into toxicity.

Though Williams sees little hope for change, we are starting to see some movement in one of the most overworked industries – banking. JP Morgan recently launched a new work life balance program called Pencils Down. 100-hour-work-weeks are so common on Wall Street as to be simply the way things are, and this change represents a marked departure from that norm. Since the 2013 exhaustion-related death of a Bank of America intern, the banking industry has been slowly introducing rules limiting work by interns and other workers. JP Morgan “isn’t imposing guidelines on how often employees should check their smartphones, but the expectation is that most weekends will be free of time-consuming work obligations unless a deal is breaking, which often happens on weekends.”

But JP Morgan’s positive initiative, not a limit but an encouragement, is a bit different – it’s a clear sign that the bank wants to combat the harmful aspects of the norm of work devotion. Especially since they’re combining it with a program to speed up promotions, decoupling success and often fruitless grinding. According to WSJ,

“A typical progression for a J.P. Morgan investment banker starts with three years as an analyst, followed by 3½ years as an associate, then three years as a vice president, and three years as an executive director before reaching the managing director title. Staffers who receive an “E” performance rating—for “exceeds expectations”—can shave off up to one year at each position.”

Too, the trend in the tech industry for the last few years has been towards expanding work perks – because hiring has become so competitive – and that has in part meant more flexibility for workers. Netflix’s “unlimited” vacation and parental leave have inspired dozens of similar policies. Sabbatical programs are growing and remote work options are more and more common.

There is real recognition of the value of flex and remote workers, and on an even more basic level, the value in encouraging work life balance. But that movement toward work life balance is running on a parallel track to the continued existence of the norm of work devotion. On the one hand, the tech industry is making it easier for workers to take time for themselves. On the other hand, it is perpetuating myths about value of crunch time and long hours.

We can sleep when we’re dead – while we’re alive our greatest duty is to chase productivity and accomplishment.

As Williams implies, there’s a certain machismo to work devotion – who will be the last man standing? And there’s a certain sexism to flexibility stigma – not only are you not performing your devotion in office for your colleagues, proving your worth, you, remote worker, have retreated to home, the domestic sphere. What does flexibility stigma imagine remote work to look like? Both someone playing hooky and someone more interested in their home life than their work life. Not just displaying insufficient work devotion, but also displaying too much domestic devotion.

As the working world continues to move away from security to flexibility – more remote work, more contract work, more career transitions – the norm of work devotion is under  serious pressure. What’s the point of thanklessly toiling when you’ll be working someplace else in three years? And as a new norm of flexibility, both in terms of how you work and what you work on, becomes more prominent, work devotion can only transform with it, or wane entirely.