Finding a Bit of Yourself in The Eyes & Lives of Others 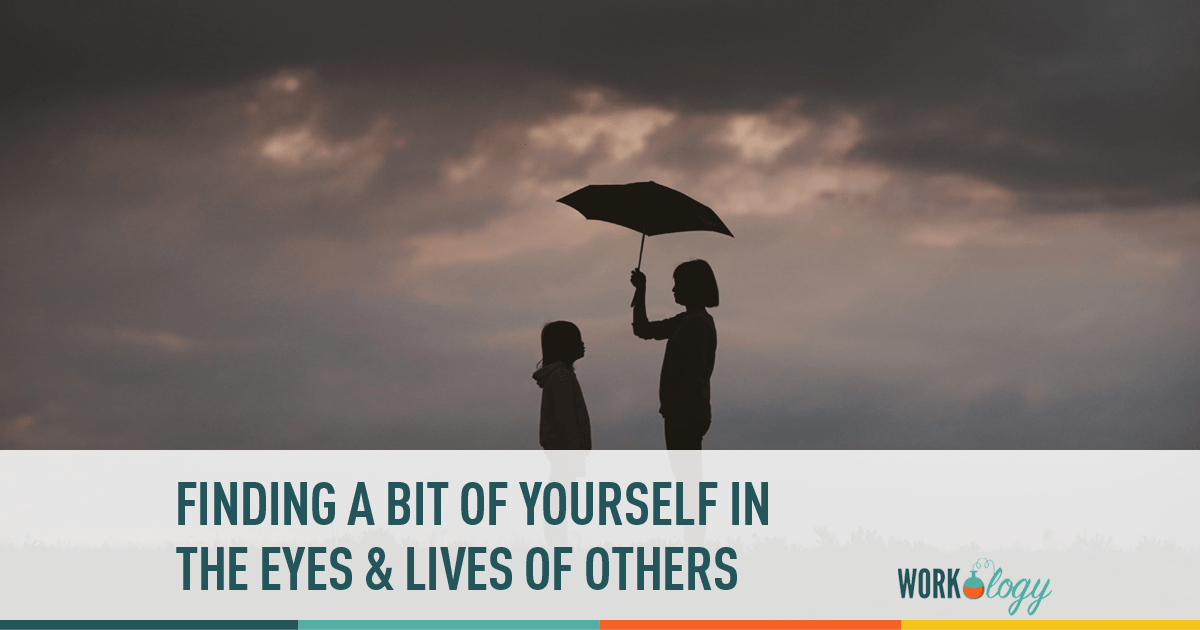 A short time ago in a workplace not that far away I worked as Human Resource professional.  And as a human resource professional and manager, I’ve dealt with my share of the not so enjoyable things like terminating employees as well as coaching, giving feedback, and being privy to information and conversations I wish I would not have.  One time in particular stands out. I had to fire someone.

The boy was young and was caught stealing from the cash register at the location where I worked.  The actual firing didn’t break my heart.  It was knowing he was homeless, living in a car, and walking two miles to work each day. While I believe that stealing is wrong, I could relate.  I grew up living on reduced lunches and garage sale school clothes.  My parents were good parents who were proud homeowners scraping to get by.  This boy was just a bit over 16 and was stealing to have fun, eat ice cream, and be a normal boy with baseball cards and shoes without holes.  Each and every week his paycheck went to cover him and his father’s basic living expenses and not the normal teenage boy stuff, and that was what broke my heart.

I remember walking into the office with security, the police, and the boy in handcuffs.  They explained the situation, and he quickly admitted to stealing.  It was then my turn to deliver the bad news that not only was he being fired, charges were being filed against him.  If he could just sign the involuntary termination document, he would be on his way.  I quietly left the office, shut the door to mine, and cried for the first time ever in my professional career while the police escorted him out of the store in front of employees, customers, and everyone else in handcuffs.

Finding a Bit of Yourself in The Eyes & Lives of Others

Maybe I saw a little bit of myself in the boy because maybe I was just like him.  Although I never was homeless and lived in a car, I do remember what it was like to have to say no to date nights, new shoes, and that customized basketball warm up shirt my freshman year.  I knew it something my family couldn’t afford.  Or maybe it was the fact that I flashed back to that day, the one where I sat in a similar office not handcuffed but in a room with security being questioned and interrogated because I was exactly like him.

I had gotten caught shoplifting at the place I worked.  Yes, I was 17, an honor student, and a basketball player.  That day was and still is the most embarrassing and shameful day of my life.  My parents didn’t answer the phone, and I had to call my uncle to pick me up from the store so that I didn’t end up at the youth detention center escorted by police.

That day I learned a valuable lesson that there are consequences for your actions.  I remember meeting with my attorney at the court house and being terrified as I watched men in shackles and jumpsuits being escorted to their hearings while I explained to my case worked that I was 17, an honor student, and a good kid who made a bad choice.  Thankfully, she gave me a second chance.  The incident was erased from my record in exchange for community service and a paper.  It was that day I learned to be humble, thankful, and that my decisions can have lifetime consequences.

So maybe I saw a little more that day in that boy than I first admitted.  It was the hardest conversation in my career I’ve ever had to have because when I looked into his eyes I saw not just a boy but a scared version of myself not too many years ago.