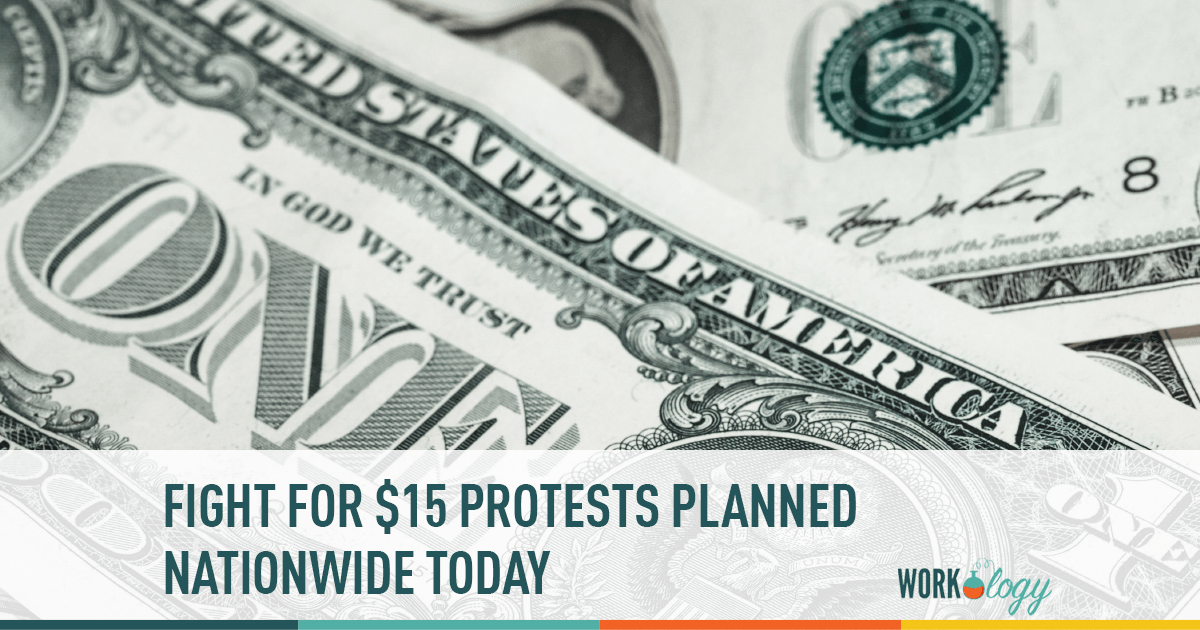 Today thousands of fast-food and airport workers are protesting in favour of a big minimum wage hike. Fight for $15 is back, and food service workers, cleaners, hospital and home health care workers, drivers and other low-wage workers are demonstrating at restaurants, airports and other high-traffic areas to spread their message. Among the protesters today will be workers at O’Hare and Logan international airports and Uber drivers.

Fight for $15 advocates for a hike in the minimum wage to alleviate poverty and the right to organize in unions and bargain collectively. And the group, along with other minimum wage hike advocates have been making progress. On election night 4 states,  Washington, Arizona, Main and Colorado, voted to incrementally increase their minimum wages to $15 over the course of several years. New York State and California have increased their minimum wages to $15. Activists have also turned their attention to the municipal level. Portland has raised its minimum wage to $15, with other cities following its lead.

Along with wage hike activists, many economists and community organizers argue that current minimum wages are from a living wage. That is, a household with two adults working full time at minimum wage still falls below the poverty line — most minimum wages in the USA cannot provide the basics, let alone comfort and security. MIT, who have developed a minimum wage calculator that adjusts for cost of living in different parts of the country, say that minimum wages provide approximately $64 of a living wage at best, 40% at worst.

Since the financial crisis and its subsequent recession, the country has seen tremendous growth in service and healthcare jobs, many of which are low wage and insecure. “Healthcare jobs” doesn’t just include doctors and nurses, it also includes technicians, administrators and cleaners. It’s important to remember, when thinking about the scope of Fight for $15, that it’s not just fast-food workers demonstrating for higher wages, it’s hospital and home care workers too. And as the economy becomes increasingly service-reliant expect more wage and labour rights protests to follow. 71% of non-farm payroll jobs are in private service-providing industries, and the wage gap between college and non-college educated workers continues to grow rapidly. So it’s only natural for unions and other labour activists to focus on low wage service workers.

Already there have been arrests at several protests, including LA, New York and Detroit. Politico reports that among the protests, 4 New York elected officials were arrested at the Manhattan protest. “City Council Members Mark Levine, Antonio Reynoso, and Brad Lander, along with State Assemblymember Francisco Moya and a small group of the protesters, were arrested around 7 a.m. after sitting in the street and refusing to leave.”