Failure Sucks! How Do You Recruit The Persevering Warriors? 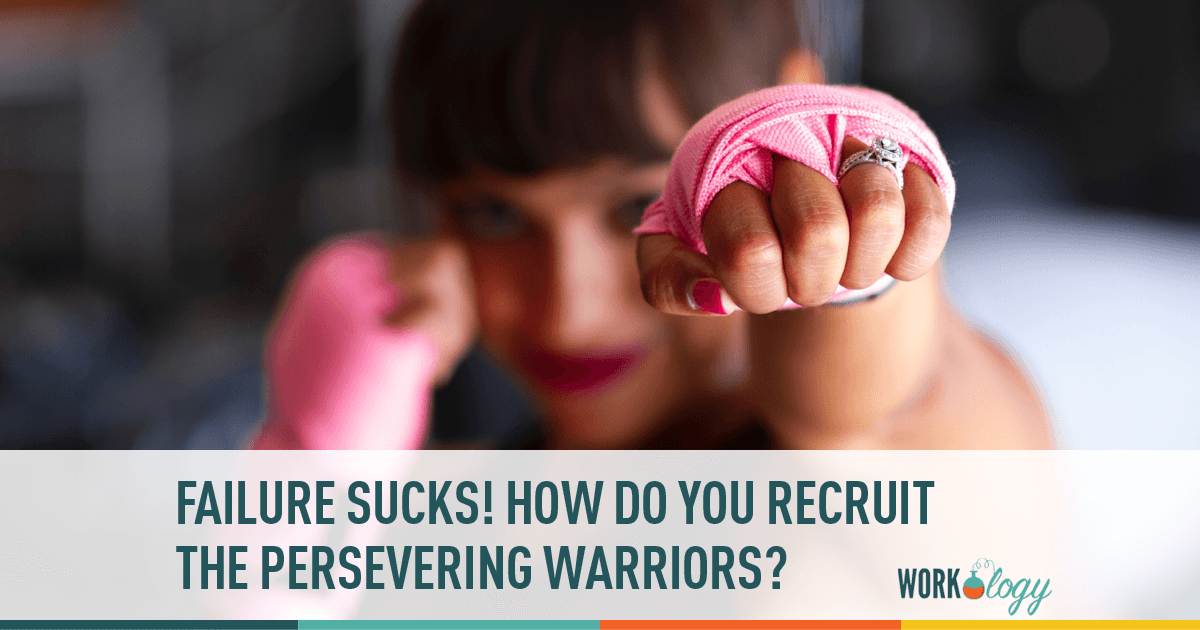 The room is silent, engulfed in darkness, you begin to feel your way around to find that there are no doors, no windows, only a dirt floor and a shovel.  It is your worst nightmare come true, failure has you locked away and the only way out is to start digging.  Depending on the degree of failure, will depend on how long it will take to dig your way out.  Let’s face it, Failure Sucks!  For those who have experienced its debilitating hold, understand very clearly the grit and determination it takes to overcome and begin the journey towards a successful path.

There have been so many historical individuals that failed again and again and again.  One of my favorite biographies is Dr. Albert Einstein, whom did not speak until he was four and didn’t read until he was seven.  As an adult, he spent so much time involved in research that everything around him fell apart.  He became mentally and physically ill. World War II broke out forcing his work to be placed on hold.  Einstein had a very dogged personality that helped him overcome failures during very troubling times.  Think about this one historical figure for a moment.  What can we truly learn from failure?  Why is it so important in life?  Why is it so important to overcome failure in order to be successful?

How To Recruit The Persevering Warriors

Einstein developed 3 Performance Characteristics after his years of failure that carried him forward in coming up with the quantum theory of light, special theory of relativity, Brownian movement, and the link between mass and energy.  He learned that failure builds characteristics inside of an individual that affords new opportunities of higher performance.  It is a journey that none of us wish to take, but when the failure train whistle blows, the journey begins and only the persevering warriors make it to their destination.

An attitude of gratitude is infectious for others to be around day in and day out.  There have been studies that show positive thinking is associated with gratitude.  This is something that you can hear in individuals voices when they are speaking.  They have an “upbeat” in their conversations and express themselves in a graceful manner.

The ability to drive the car during the storms without losing ones head is grit.  It is the individual that dredges through the mud screaming their own name.  Grit can be tested here and here.  The focus should be on listening to individuals speak about confronting obstacles and overcoming them in order to achieve the determined goal.

“How rarely do we see people living, or for that matter, creating, by them.  Yet if I were asked to name the most important items in a writer’s make-up, the things that shape his material and rush him along the road he wants to go.  I would only warn him to look to his zest, see to his gusto.”   The individuals that live with an attentive curiosity to the details of life will have gusto in everything they do.  They will be able to accomplish tasks that others are unable to complete.  These individuals breathe the air of life into everything they see and touch.

Companies will need these persevering warriors that possess the 3PC’s mixed within their organizations in order to push through difficult times.  Unfortunately, failure is not something you can take a class on and become certified.  You must make the journey in order to possess gratitude, grit, and gusto.  In order to ensure you are sprinkling a couple of these individuals within your organization, add the 3PC’s to your interviewing scorecards in order to locate the persevering warriors.

“You may encounter many defeats, but you must not be defeated.  In fact, it may be necessary to encounter the defeats, so you can know who you are, what you can rise from, how you can still come out of it.”