Failing at Work: Overcoming the Stink of Bad Leadership 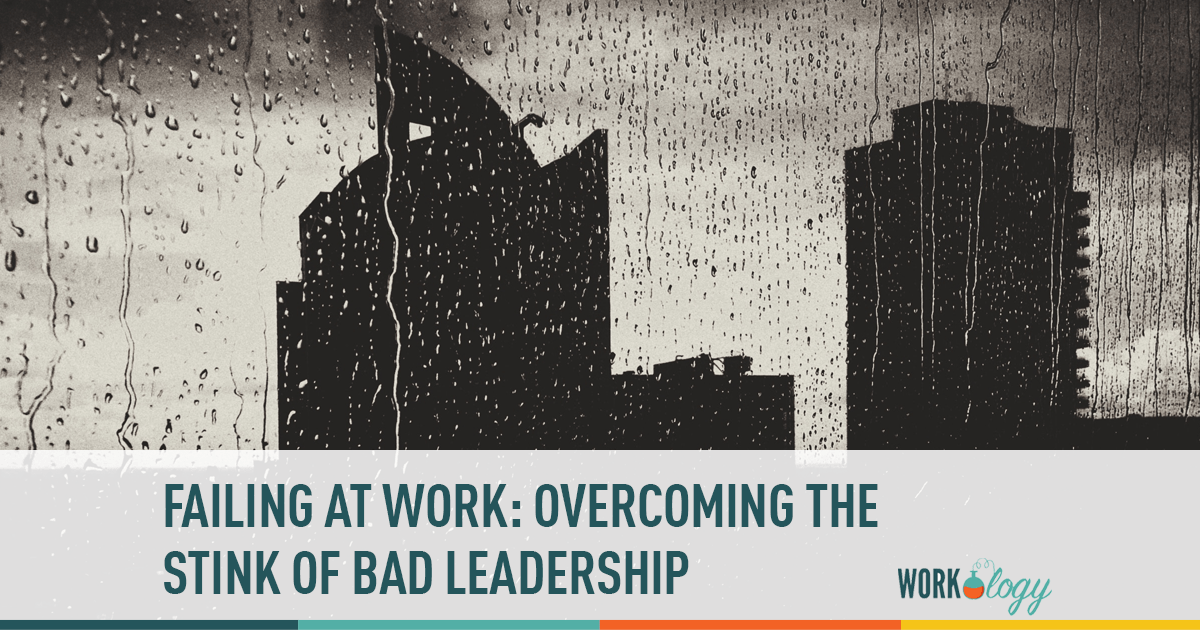 In my last HR leadership role, I was introduced to the concept of “stink” being attached to individuals who had fallen from grace with the CEO or certain members of Senior Management. Unlike in real life, getting the stink off your body can be an arduous task in a business setting. Think a skunk spraying you.

It was eye-opening for me the first time I heard the term. Within a few weeks of working at this organization, it became apparent that it was a common and often used analogy. In some cases, this stink became permanent, like a tattoo. Some of these folks worked very hard to remove the stink. A few had no idea they stunk until they became isolated or even worse lost their job. And the last group became aware, resentful and rebelled in angry or disruptive ways as a defense.

So of course, the first question many of you would like to ask is “how does one get stink of failing or aligning with failure at work”? Well in this work environment it wasn’t all that difficult. The CEO liked to test folks and look for cracks in the consistency of response or work product. Failure was expected of most at some point and how you responded to failure was the key to whether you became smelly. The organization had an apologetic culture where publicly accepting blame and responsibility was expected (can you say toxic?). Folks who did not own their mistakes and go to the business confessional were instead sent to the penalty box for short periods of time, like a 2-minute penalty in a hockey game. Too many penalties and the stink would be applied. Of course, this is metaphorical but real in the sense that you had it and it was difficult to remove. Sometimes stink first gets noticed on a review or coaching session. A supervisor informs you that you need to improve or change your approach to business situations. Or you’re told that you need to take responsibility or apologize for actions even when you may not have run a fowl. Then it would advance to poor reviews, being passed over for assignments, being ignored by leadership, or having a glass is half empty response to your work product (“it’s never good enough”). Think of it as a corporate scarlet letter that all could see.

Many workplaces have this stigma or stink that gets attached to individuals too. Although most refrain from labeling it as stink. It manifests differently in every organization but trust me stink from failing at work does happen.

On a personal level, I have for many years believed that when dealing with acerbic executive management, you keep to the facts and use data to back up your actions or statements. Kind of interesting that data is the hot topic these days. For behavior issues, it has been a tool for better than two decades. Just utilized in a different way. In this case defensive cover or CYA. It’s hard to take someone down that is always coming from a position of data and facts.

From an HR leaders’ perspective, the issue is complex. With no easy answers. I have struggled in two different organizations dealing with management applying stink to individuals. When I worked as the CHRO for a major accounting firm, the stink was less noticeable. It usually started with folks not being assigned to top clients or the individual’s utilization (how much billable time they had each month) being lower than others in their peer group. This was usually explained by Partners as capability or lack thereof. Upon digging, or should I say sniffing, many of the individuals had been sprayed for personality clashes, style differences, or just not being part of the gang.

How to Start with a Clean Slate

Starting over and bouncing back in your organization or work from failure is never easy. While there is no essential formula for success, in my experience I found my organizations were able to move forward doing one, all or a combination of the following

One of the ways we helped the organization and leadership start over fresh was by dealing with fairness at the organization was to have HR schedule all work or at least manage the final scheduling each week with senior managers. This allowed for an impartial individual to even out some inequities or have conversations with senior managers when someone was struggling or starting to “smell.” An early intervention of sorts and it avoided some individuals from getting sprayed and others to get a shower before the stink became too difficult to remove.

How you schedule employee interactions is up to you. I’ve personally found success in skip-level interviews or meetings where leadership takes a more direct approaching talking with employees.

Earlier in my HR career, we had monthly micro-coaching sessions with our corporate staff. This was a preventative measure. We coupled this with frequent 360 assessments of our senior management team to look for behaviors that lent themselves to be a corporate skunk. Now the trend is weekly or bi-weekly check-ins at many organizations. There are certainly many ways to prevent or curtail stink and even more to reverse it.

I mentioned this earlier but it bears repeating again. In order to create a fair workplace that is fresh and clean means having open conversations about challenges and things that are surfaced through surveys, these micr0-coaching sessions, or directly from employees. Talk to your managers and leaders about the issues being discussed by employees so that the individuals and the organization can take planned as well as personal steps to try and move forward making progress.

Is this happening in your organization? How are you dealing with it? We would love to hear and continue this conversation. Feel free to comment or connect. In the mean-time lots of soap and shampoo!

Mark S. Fogel is the Co-founder of Human Capital 3.0, a Human Capital and Organizational Leadership advisory firm servicing a broad range of industries with a focus on assisting businesses identify and grow its talent strategically. As a former CHRO for Leviton, Marcum, and Success Academy Charter Schools, Mark was the recipient of several national awards including SHRM’s Human Capital Leader of the Year and HR Executive Magazine’s Honor Role. Often Quoted in national media, Mark brings a refreshing point of view to every HR discussion. Follow him on the SHRM blog, Fistfuloftalent.com and on Twitter @HC3.