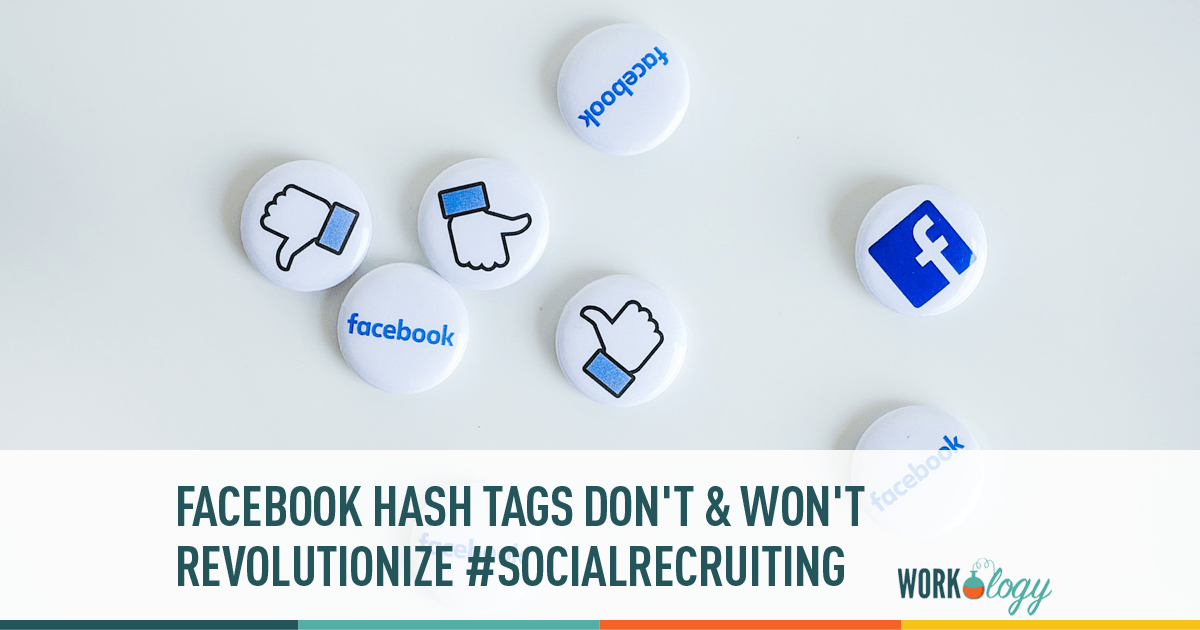 Intrigued by Facebook? Learn how recruiters are using Facebook to recruit, source and hire including Google X-Ray. Register for our free webinar always available and on demand.

Last week Facebook announced it’s addition of hash tags to the number 1 social networking site on the planet. This isn’t a new phenomenon since nearly every other social networking site including Instagram, Vine, Twitter and Google+ offer hyperlink hash tags as a way to engage, surf and connect with individuals under the same topic. What Facebook isn’t doing is not new. They are simply just trying to keep up the pace. Personally, it’s too little too late.

Hash tags are the Dewey Decimal system of social networking offering a way for the individual user to self-catalogue and file their social media update for others to see. On Instagram, I use fun and personal hash tags like #instacat or #momlife as a form of self-expression. On Twitter, I use #socialmedia or #business hash tags as a way to not only organize my tweets but reach different Twitter users I’m not yet connected with. Recruiters can use hash tags on Twitter and other social networks as a way to source and search for candidates who are talking about topics or keywords for open positions they have at their company. This is the real benefit and value add of hash tags on social networking sites in my opinion. I can engage, relate and reach a new network with fanning, following or paying for sponsored placement to reach job seekers, customers and my target audience. Except with Facebook, I can only engage, research and relate to my friends and only those who I have friended me on the world’s largest social network. And that frankly, stinks.

The average Facebook user has 141.5 friends on Facebook. Obviously, this number as an individual varies depending on your online connectedness and use. There are 1.11 billion registered Facebook users which is vastly more robust than a recruiter’s first choice when it comes to social networking, LinkedIn. Except that Facebook is bulky, hard to search and doesn’t offer recruiting features that make it easy to use.

The problem with Facebook hash tags for recruiters, hiring managers and internet sourcers everywhere is that users can only search and view the hash tags of friends they are connected too. Facebook remains a closed network. It’s like the old days of LinkedIn Open Networkers where everyone connected with everyone to improve their search results except, there’s a major challenge because Facebook caps your friends at the magic number of 5,000. Yes, they cap you at 5,000 friends. As a recruiter, I could either:

Facebook Recruiting is Effective but Not Stand Alone Solution

While I love Facebook all these options outside of the X-Ray option are an incredible amount of work. Hopefully, using Facebook as an engagement platform, number 3 is already happening at your place of work. This idea relies on driving passive job seekers to you offering little direct action that makes internet sourcing to appealing. Facebook is a wonderful platform to engage and share with friends, customers and fans, but it stinks when it comes to internet sourcing and search. To say that Facebook hash tags offer a Holy Grail solution to your recruiting strategy are severely short sited because it won’t happen today. In short, Facebook has a long way to go to compete with social media platforms like LinkedIn especially with current internet sourcing technologies being offered such as Entelo, TalentBin and Remarkable Hire.

Can Facebook become the number one source for recruiters and hires taking the place of LinkedIn? It could absolutely happen and until they add paid search functionality or a recruiter seat option that provides OFCCP compliance, they will remain a shiny knockoff to our go to recruiting resource, LinkedIn.com.

Intrigued by Facebook? Learn how recruiters are using Facebook to recruit, source and hire including Google X-Ray. Register for our free webinar always available and on demand.