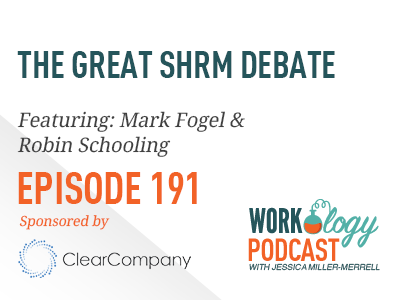 In case you’ve missed the drama unfolding after SHRM CEO Johnny C. Taylor Jr. took an aggressive posture at a conference in January, defending the organization’s participation in White House initiatives and associations with individuals some members find objectionable, you can catch up on Twitter with the hashtag #FixItSHRM. It’s something that everyone is talking about but no one is really talking about in a public or digital setting outside of social media posts and tweets.

Welcome to the Workology Podcast sponsored by ClearCompany.

Robin Schooling, SPHR, SHRM-SCP, a senior HR leader and consultant, writer and speaker, tweeted: “while I applaud the goal and support the importance of this initiative, @SHRM getting in bed with the Koch brothers has solidified my decision to not renew my membership in February, there are other ways to get this done.” Mark Fogel, GPHR, SHRM-SCP, Co-founder of Human Capital 3.0, a Human Capital and Organizational Leadership advisory firm, wrote about the controversy for Fistful of Talent in February, closing with “SHRM is a member organization, so it’s up to everyone that is a member to weigh-in. I am a dreamer and yes, an optimist, and still believe the Society does many important things, including training and keeping us informed on legislative changes. Johnny Taylor could be the first SHRM CEO in a long time to really get things done if we make a few adjustments.”

Robin has chosen not to renew her SHRM membership while Mark has decided to work on the inside. Today I’m interviewing both Robin and Mark to get a perspective on the controversy from both sides.

What’s the Deal with SHRM?

In this episode, we discuss the SHRM controversy. Why is this happening now? Is it all about the picture of SHRM CEO Johnny Taylor with President Donald Trump or does it go back further?  I’m long-time friends with both Mark and Robin and I value their friendship and opinions. This is a sensitive topic that has ended relationships. I appreciate their willingness to discuss openly their thoughts, feelings, and opinions. I wanted to set outside of things and hear from two different sides about their points of view.

While their opinions are their own, I do think that both Robin and Mark offer great insights into the polarization that is happening within the HR community right now. There are rifts developing in our industry and I believe they are hurting the opportunity for members to connect, engage, and learn from each other. And this conflict is not unlike the political polarization that is happening in our lives and workplaces right now.

They (SHRM) try to be everything to everybody. And you know ultimately there's no way they're going to please all three thousand members. - @robinschooling #shrm #hr #fixitshrm Click To Tweet

What Most SHRM Members Don’t Understand

Both Robin and Mark have been in the industry and have been involved in SHRM locally and nationally for a long time and as influencers in the HR industry, they also have a unique point of view getting access and exposure to the inter-workings of the SHRM itself. For those HR influencers in attendance at the SHRM Annual Conference this year, we were able to meet with and talk to Johnny in the HR blogger’s lounge. Mark touches on the experience in the podcast interview and if the disagreements and the #FixitSHRM movement was addressed.

We're not always going to agree. The problem is when not agreeing leads to actions that people feel are detrimental to the HR community. This is a polarizing conversation. - @hc3 #shrm #hr #fixitshrm Click To Tweet

Robin shares that more than anything she wants to have a dialogue with SHRM and a place where those who are disenchanted can be heard. I agree with Robin’s recommendation, and I’d love to see SHRM host open forums or town halls where HR practitioners can connect with the SHRM leadership online or in person to ask questions, learn more about SHRM’s plans and strategies both political and otherwise for the future. This needs to happen in a way that is accessible to everyone and not those that are volunteer leaders or have the financial means to travel to Washington DC or conferences.

Mark shares about his decision to stay a SHRM member and his decision to work to help and influence from the inside. Mark is an instructor and teaches SHRM certification courses including at Workology and is very involved at a national level as a speaker and in his HR consultancy.

Robin says that most SHRM members don’t understand how political the SHRM organization really is and their involvement not just with the current Presidential administration but their alliance with the Koch Brothers is not in alignment with her own beliefs and opinions which is one of the main reasons for not renewing her membership.

You need to listen to the full interview. My intent was to create a balanced podcast conversation where both sides are heard. This podcast isn’t just for SHRM members and HR leaders but also for the current leadership at SHRM themselves. Yes, I’m talking directly to you (yes you) at SHRM. I hope SHRM listens to the podcast and make plans to meet with members of the HR community to openly talk and listen to each other. This doesn’t mean that SHRM will change its alliances or involvements with different programs and affiliations, but it’s a start in the right direction for everyone.

Every industry has its ups and downs with regards to member organizations, however, human resources is unique in that it is a sector of professionals that isn’t industry-specific. Educationally and historically, organizations offering certification in the HR field have a great deal of power and they are self-regulated. The collective voice can be just as powerful. I appreciate Robin and Mark discussing the SHRM debate with me today.

I am very interested to see how SHRM will be involved in the upcoming presidential election. This isn’t the last of the conversation on this topic, but I hope that it helps facilitate discussion and conversation among those within our HR community.