Ep 85 – What Employers Need to Know About the FLSA Changes 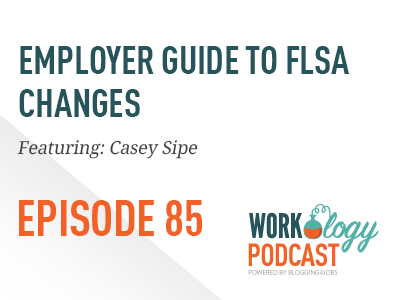 The Department of Labor’s final rule on the updates regarding the Fair Labor Standards Act has arrived. Employers must begin following the new changes starting on December 1, 2016. This new announcement provides a much needed update surrounding four key areas: 1) Defining and Delimiting the Exemptions for Executives, 2) Administrative, 3) Professionals, and 4) Outside Sales and Computer Employees

Just to give everyone some background, the Department published a Notice of Proposed Rulemaking (NPRM) in the Federal Register on July 6, 2015 (80 FR 38515) and invited interested parties to submit written comments on the proposed rule by September 4, 2015. The Department received over 270,000 comments in response to the NPRM from a variety of interested stakeholders. The feedback the Department received helped shape the Final Rule. So let’s get down to discussing the final rule as outlined last week by the DOL.

Episode 85: What Employers Need to Know About the FLSA Changes with Casey Sipe (@CLSEMPLOYERLAW)

Employment lawyer, Casey Sipe  breaks down some of the changes happening with the FLSA update and helps us understand their impact, including:

Casey cautions that HR should be most concerned about:

Casey tells us that now is the time to take stock of your wage and hour procedures. It’s the perfect time to make changes, especially if employees have been improperly classified. Penalties for this include back pay for up to 3 years.

New FLSA regulations go into effect December 1, 2016. HR professionals have until this date to be in compliance. Use the time you have right now to get your house in order and figure out the best way to move employees from salaried to hourly, how to communicate it and to take a look at the bottom line.

Casey recommends a wage and hour audit and taking a public relations approach to your internal and employee communication. These FLSA changes are being positioned by the Obama administration as employees being able to earn more money. There is an expectation by experts of $5,000,000 in new overtime as a result of the FLSA Update.

As far as employer options, Casey says that companies can hire more people including part time, contract workers, or provide them with overtime pay. Which is the most cost effective option? You can find more information on the official ruling from the DOL in our resources below.

Connect with Casey Sipe on LinkedIn.