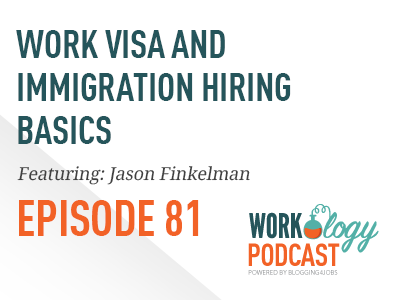 According to a recent SHRM Survey on the employer’s work visa process, 70 percent of respondents—and 96 percent of large employers with at least 20,000 full-time equivalent (FTE) employees—said the ability to obtain visas in a timely, predictable and flexible manner is critical to their organization’s business objectives. The United States work visa and immigration process for HB-1Visas is an absolute nightmare.

Today on the Workology Podcast I’m talking with Jason Finkelman. He’s an employment based immigration lawyer. Jason works with employers who want to bring over talent from abroad to the US. He’s one of the few attorneys who specializes in this area.

Immigration from an employment standpoint starts with a person needing a temporary visa to come and work in the U.S. Challenging because there are not of options within the immigration system to get those work visas for foreign nationals. The requirements are very strict and frankly archaic. Laws haven’t updated in a long time, which is a big reason for the complications, confusion and delays.

HR folks are challenged because they are having to fit square peg into round holes.

The Two Types of Work Visas

There are two types of visas: 1) non immigration work visas and 2) immigrant visa for permanent lawful residents. Jason discusses strategies for the H1-B Visa petitions, including advising companies who are playing the law of averages to submit large number of petitions in the hopes that a percentage will get selected.

Fees for visa submissions are the same regardless of the size of the company. The 2013 SHRM survey, which I mentioned earlier, revealed that the average employer spends $506,972 on this process. Large organizations (20,000-plus FTEs) spend an average of $1,784,713. The five employers at the highest end of the scale reported spending between $3,771,100 and $5,500,000 in this area. Jason recommends working with qualified counsel to go through the work visa process — which makes sense, given how much is at stake.

Much of Jason’s time is spent working to dispel rumors and provide resources for founders and CEO’s of technology companies. There is no such thing as a startup visa or entrepreneur visa in the U.S. Founders need to have a significant amount of capital in order to sponsor their business. They are sponsoring themselves using their business. Startups will have to prove as part of the application that the business they are starting or creating can scale and grow.

Connect with Jason Finkelman on LinkedIn.