Ep 74 – Why Millenials Are Saying No to College Education #fivegenwork 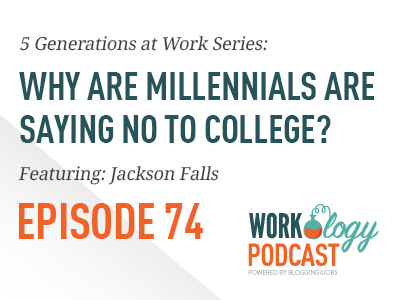 We’re introducing a 5 Generations at Work Series on the Workology Podcast where we will be talking with 5 different guests from various generational vantage points that will be discussing stereotypes, myths and common misconceptions about each of the 5 generations. I’ll be using the Twitter hashtag, #fivegenwork. Feel free to chime in and share your own experiences on Twitter or in the comments section of the blog.

Episode 74: Why Millennials Are Saying No to College Education with Jackson Fall (@jacksonfall)

It’s no secret the cost of a college education is soaring. In total, Class of 2015 Graduates owe about $56B in debt, a blend of both federal and private loans, a fivefold increase since the 90s. I’ve started to notice a trend in Silicon Valley and beyond for talented professionals to forego a college education and instead hopping feet and head first into the professional world.

In this episode, I’m talking with Jackson Fall. He’s a longtime friend and a 20-year-old UX Developer and Designer who dropped out of high school and moved to Silicon Valley. Jackson has a successful career in design and development, working freelance in the technology sector on a variety of projects.

Jackson says, dropping out of college is a sexy badge you wear especially in Silicon Valley. People who are in charge or hiring read about the dropout founders and they are willing to take the chance. But “you can’t drop out of college and say I’m done learning. I know everything,” says Jackson.

Jackson falls on the tail end of being part of the Millennial and Gen Y generation at age 20. Jackson has never applied for a formal job or an online application. He uses word of mouth to gain business, social media connections and relationships. People he has made meaningful connections with. He has, however, worked with professionals from all experiences and generations.

Biggest Misconception of Millenials at Work

I asked Jackson about of one of the biggest misconceptions of Millennials, their dress. Jackson says first impressions are important. Anything you can do to differentiate yourself from the crowd, you should do. This holds true whether you are a tech startup or an employer courting talent.

One of Jackson’s biggest frustrations about the generational stereotyping that’s happening is it isn’t about generations at all but rather a communication problem between generations. Younger people have more of a sense of community because of the increased information, resources and networking that social media provides. More experienced workers need to understand that. Both do and they should work together.

A Millennials Advice to Human Resources and Recruiting

Jackson asks HR and recruiters to keep in mind that a lot of these young people don’t know what they are doing. They have an image in their mind but don’t have the experience to portray it. Honesty between people is what will bridge those generational gaps. He says to accept that the ways in which we engage and find work and do work have fundamentally changed. We aren’t going back. He sees a lot of resistance to this, but says we should embrace the change and work with each other instead of against each other.

Be sure to listen in and hear what social media tools and resources Jackson is using. He has some great insights, and I hope this podcast makes you consider if a college education is more important than work experience. More importantly, I want podcast listeners to think about how they are going to recruit qualified Millennial job seekers to organizations who aren’t frequently on college campuses.

Connect with Jackson Fall on LinkedIn.

No hay conexión a internet
Posted in Podcast