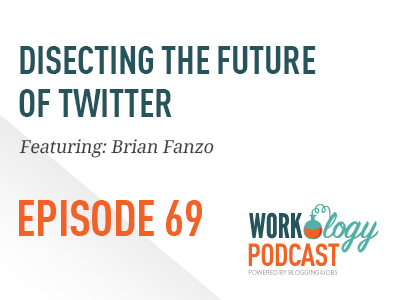 Twitter has been an important part of building and growing my business. Three hundred forty-seven thousand (347,000) tweets are sent every single minute and yet Twitter has been under fire these last few weeks, leaving many to wonder if this struggling social network can reinvent itself.

Episode 69:The Future of Twitter with Brian Fanzo (@isocialfanz)

Given the recent media that’s been buzzing about Twitter, it only felt right to sit down and talk to one of the most passionate advocates and Twitter users, Brian Fanzo. Brian is the Periscoper of the Year and is someone who I consider a real Twitter professional.

Brian walks us through where he thinks some of Twitter’s growth and adoption challenges are coming from especially when it comes to new user adoption. He says that Twitter is great for events, which we know from HR conferences like SHRM and HR Tech, but after the event Twitter users are by themselves with no one to talk or tweet to. He says you (meaning users) end up following celebrities, but there is no engagement. In order to fully leverage and engage on Twitter it requires an ongoing commitment that you can’t get just by following Kim Kardashian, Lady Gaga or Kanye West. Sure they’re entertaining, but you don’t actually get to talk to them one on one – just learn what not to do in Kanye’s case.

Brian says Twitter is the glue for all types of social media platforms and social media conversation. It allows us to have conversations and get to know people we didn’t but with whom we share a passion or a common purpose. Hashtags are the best way to find those new like-minded connections. Brian also has a lot of thoughts surrounding around Twitter’s recent less than stellar quarterly earnings announcement and the new Twitter algorithm, which you can read more about in the resources listed below. Brian believes the  new algorithm will help you organize your message and the content or community that your users enjoy most. I’m optimistic and hope that this change will re-energize Twitter engagement, growth and use.

The Role of Video Streaming in HR and Recruiting

Since Brian is the Periscoper of the month and an avid video streamer, I took the opportunity to ask for his thoughts on how employers can best leverage real time video. He provides us some great insights into how livestreaming using services, like Blab, Meerkat, YouTube and Periscope, can help foster company culture, employee relations and employment branding. He talks about how companies can use these very personal and in the moment video technologies to build trust, engagement and drive organizational awareness.

Connect with Brian Fanzo on LinkedIn.