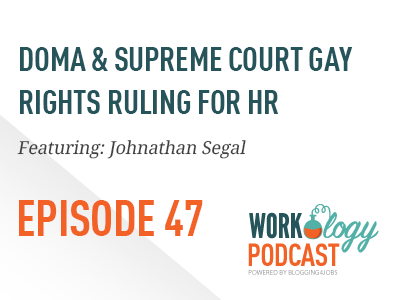 Last month, my Facebook wall was full of rainbows celebrating the Supreme Court’s 5-4 decision legalizing gay marriage. While I’m in support of the decision, I know that the Supreme Court decision has forever changed human resources, employer benefits and the workplace.

Jonathan walks us through insights into how the decision will drive changes in leave laws, FMLA, health insurance offerings and domestic partner benefits. Employers will need to define “spouse” in health plans and make adjustments in their bereavement leave offerings.

Jonathan talks in great detail about the 5-4 decision referencing both Justice Kennedy and Justice Roberts comments which I included in this transcript for your consideration.

Justice Kennedy’s comment who voted in favor of gay marriage:

“No union is more profound than marriage for it embodies the highest ideals of love, fidelity, devotion, sacrifice, and family’,” said Caroline Fredrickson, president of the left-leaning American Constitution Society for Law and Policy,” wrote Justice Kennedy.

Justice Roberts’s dissent and comment about gay marriage and equality:

“Stripped of its shiny rhetorical gloss, the majority’s argument is that the Due Process Clause gives same-sex couples a fundamental right to marry because it will be good for them and for society. If I were a legislator, I would certainly consider that view as a matter of social policy. But as a judge, I find the majority’s position indefensible as a matter of constitutional law,” wrote Roberts.

How to Communicate the Supreme Court Ruling & HR Changes Appropriately

Jonathan shared insights into how to communicate the change to your employees, how this decision impacts them as employees as well as individuals and what to expect from HR as well as senior leadership. Does it matter if employees support or oppose the Supreme Court decision and how does this impact religious beliefs?

One important point that Jonathan mentions is that the Supreme Court allows for gay marriage but doesn’t protect employees from being fired because they are gay. Check out our resources section to get information on the states where termination because of sexual orientation is legal as well as links to the Supreme Court document in its entirety. Be sure to connect with Jonathan Segal on LinkedIn.