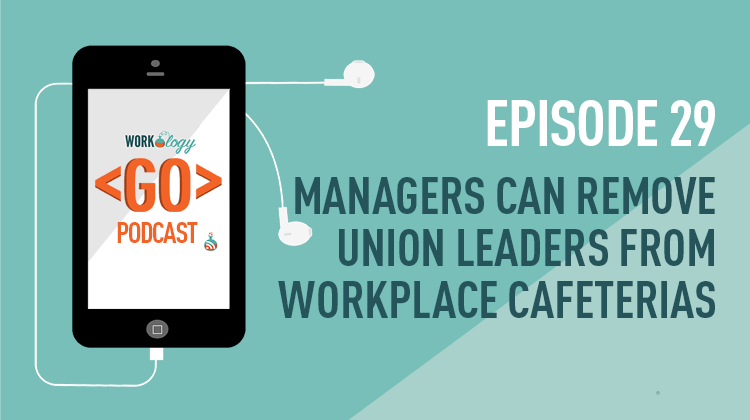 In 2018, the union membership rate for full-time workers (11.6 percent) was about twice the rate for part-time workers (5.4 percent). Union Representation In 2018, 16.4 million wage and salary workers were represented by a union. The union membership rate–the percent of wage and salary workers who were members of unions–was 10.5 percent in 2018, down by 0.2 percentage point from 2017 as reported by the Bureau of Labor Statistics.

In an earlier Workology Go Podcast, I talked about the NLRB’s position on gig workers. I’ll link to that episode in the resources section of this podcast transcript. It seems yet again the NLRB is in the news. In June, the NLRB ruled that employers may ban union representatives from promoting their union in public spaces within the employer’s facilities if those representatives aren’t employees. This decision overturns a nearly 38-year-old precedent that allowed nonemployee union reps to use public areas of an employers workplace like cafes to solicit for or promote union membership so long as they weren’t disruptive. Having worked in a lot of different environments in retail that were union and non-union businesses, I have worked closely with unions and had many confrontations with them inside of employee break rooms and other workplace areas so I was surprised to see this overturned.

Today’s featured article comes from Bloomberg and is tilted, “Bosses Can Boot Union Organizers From the Cafeteria, With Limits.”

The UPMC decision is a big decision for the business community and a favorable one. It basically is the board saying that employers now have the right to not permit union organizers or other activists from coming into public areas on their private property for a number of years, decades. In fact, outside folks were able to come in and distribute literature to employees and talk to them about union organizing and other things. Under under the Babcock case, it’s no longer the case. You do have to make sure that you don’t have other people on the property giving them access within. Then turn around and try to deny access to the union. If you allow other types of solicitation, you’re going to run afoul of the decision. So you do have the employers still. You have to be aware of what’s going on in their in their work areas and be consistent in their behaviors as they had to do in the past. Having said that, the other thing that employers need to bear in mind is that there are still a number of ways for employee unions to reach out to your employees through social media. Internal organizers who are interested in bringing a union into your workplace will be talking to your employees in the workplace. And you can’t stop that. The best defense for this. If you want to turn it that way, is to build an atmosphere and maintain positive employee relations in your workplace. Treat people right fairly. Dignity and respect, equal pay, all the kind of things that are often talked about in the workplace now. As for creating engagement, is your best line of defense for this type of stuff. So bear that in mind and pay attention to the UPMC case and other board decisions that are coming in the near future.

This change, in particular, is one that I encourage you to share with your front line managers and leaders along with steps to address if a union leader in found in one of those now prohibited areas. I see this change being the topic of discussion in thousands of upcoming manager meetings and leadership communication.

Bosses Can Boot Union Organizers From the Cafeteria, With Limits