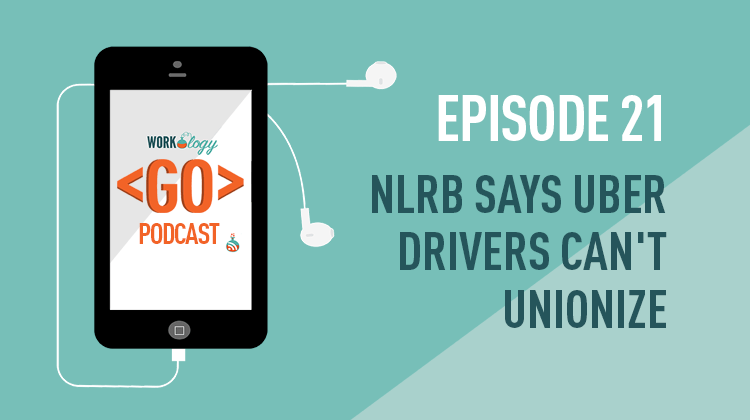 Gallup has found that more than one third (36 percent) of U.S. workers are in the gig economy, which works out to a very large number of approximately 57 million people. The gig economy is growing like crazy and because this area of contractor and self-employment is growing. Our labor laws aren’t keeping up and a growing number of gig workers are filing unfair labor practices, unemployment and EEOC claims.

Today’s featured story is from Employer’s Council and is titled, “Door to Door Unionization at the NLRB Slammed Shut to Uber Drivers.”

I did want to include a portion of a past Workology podcast interview where we talk with attorney Bobby Silverstein who talks about how the gig economy is changing how employers are hiring and employing independent contractors through web-based platforms who have a disability. Traditional employment laws don’t necessarily apply. Bobby talks about if the ADA applies and Title VII to the gig economy.

Well there are three basic issues or topics that I think folks should be focusing on. The first is whether a business that uses a web based platform to select gig workers. Whether they’re acting as employers and whether the individual vendors are considered employees. The second major topic is if these vendors are considered independent contractors and the companies are not considered employers subject to the FDA whether or not there are other provisions of the FDA that still apply. Another words if you are not an employer you’re not subject to Title One of the ADA which deals with employment discrimination but you may well be subject to Title 2 of the FDA which deals with state and local governments or Title 3 which deals with public accommodations. That is businesses that do business with the public. So the second first issue. Are you an employer. Is there an employer employee relationship. If the answer is No. And you’re an independent contractor. Are you still subject to non-discrimination rules as far as public accommodations or state and local governments. And the third question is whether those companies that design those web based platforms are required to make their marketplace accessible to all including people with disabilities.

And so those are the three major topics that I think we need to discuss and these are interesting topics and they’re fundamentally different than the way we as human resources and recruiting and workplace leaders have operated our departments or our businesses.

Sure. Particularly if the conclusion in a given circumstances is that the business is not after operating an employer employee relationship. And so the question is if they are an independent contractor. Are there still requirements. And that typically does as you said go beyond what human resources folks expertise entails.

I’m also linking to an article in the podcast transcript resources that talks about Texas Workforce Commission who in April of 2019 recently passed a rule by a 2-1 vote that would allow companies like Uber, Lyft, Favor, and Instacart who hire independent contractors to not have to pay unemployment taxes and benefits to these contract and gig workers.

The gig workforce is changing and these are two examples of many more laws, votes, memorandums and court decisions that will continue to shape our workforces and address the gig economy as more people than ever take part in gig work as a full-time or part-time income supplement.

Door to Unionization at the NLRB Slammed Shut for Uber Drivers