Ep 168 – How Robots & Artificial Intelligence Will Change Our Workplace 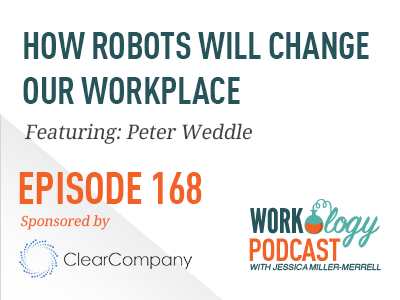 The subject of artificial intelligence is a hot one in human resources and recruiting circles. According to Bersin’s 2017 Human Capital Trends Report, 38% of companies believe AI and robotics will be fully implemented in their company within 5 years and even more, recent research shows that AI adoption is moving at a pace much quicker than many of us even realize. The bigger question is about how AI and robots will impact our jobs as well as the future of how we live and provide for our families. Before we introduce our guest, I want to thank our sponsor, ClearCompany.

Episode 168: How Robots Will Change Our Workplace with Peter Weddle (@PeterWeddle)

Peter Weddle is an innovator in the HR and job search space. He’s published multiple books including his most recent, “Circa 2118: What Humans Will Do When Machines Take Over.” He’s also the CEO of TA Tech. Peter walks us through how the world will be changing as a result of robots, artificial intelligence, and other types of technology changes. He talks about his book but also sites some really intriguing research to support how quickly this tech is being adopted. A report from Boston Consulting Group reports that up 23% of all industrial tasks will be automated by robots by the year 2025 and P.W. C. says that 38% of all jobs will be automated just five years after that by 2030.

These adoption rates in our workplaces of technology combined with the likelihood that employees will be shifting to different jobs and areas of the business. Peter says that these things put HR in a unique position to really be the champion of change. Peter helps define what is called singularity which makes me think of the Terminator and other sci-fi shows and movies. He says singularity is the point at which AI and robots intellect surpasses human beings. Until that point, it’s humans who are teaching robots. Once singularity occurs, robots will no longer need humans to learn, teach, and evolve. When will singularity happen? Experts aren’t sure but many believe this will occur between 2040 to 2050. This means we will experience this in our lifetime.

As the workforce changes and the way in which we do work and earn income, Peter says companies will rely on HR to help them make the transition, train their people with the focus really on workforce succession, development, and planning. Peter believes that HR professionals will remain important in an organization for a longer period of time in part because of their expertise which is again why he believes HR needs to get in front of the conversation.

What Industries Will Be Impacted First by Automation and Robots?

Robots and automation will impact all industries but certain industries will be impacted more quickly than others says, Peter. Industries like transportation, logistics, the legal profession, and even journalism. Peter mentions to me that computers are already writing headlines of articles for new sites and publications.

Peter walks us through what HR should be doing in preparation for these changes to come to our workplaces. He says that preparation is the first thing to think about especially for the individual HR leader. He suggests we become familiar with the technology and it’s new capabilities and roles but not the level that we are writing code or taking courses in algorithms. This podcast is a great start. Secondly, Peter suggests that HR leaders let their voices be heard sharing how these changes will impact their workplaces. This means talking with professional associations like SHRM as well as well as your government and elected officials. Thirdly, Peter suggests that individuals work to prepare themselves and the communities they lead through thinking about these changes because automation will dramatically change basics including home we generate income as individuals.

Peter gave us a lot of food for thought including which industries and jobs AI will impact first. I also agree with Peter, that this really is an opportunity for HR to become a leader in your workplace when it comes to the AI conversation. That means educating ourselves on these topics so that we can prepare our workplace and leaders for the future workplace and business landscape. To be honest, after having this conversation with Peter, I was more than a little scared as I think about what the future workplace looks like for my 10-year-old daughter. His thoughts on universal income are something I’m going to be writing about in the coming weeks so that I can make an informed opinion about how our lives will be impacted on AI and this robot technology.