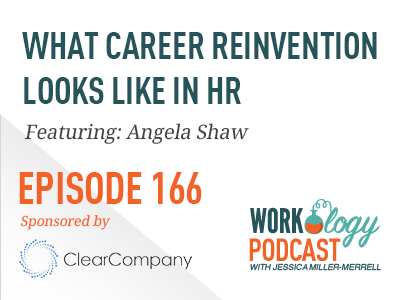 A lot of time is spent on the subject of breaking into HR, but not enough about how to grow your career, change your path, and create a legacy. According to Data USA, there are 804,000 professionals working in HR in the US. The HR profession is growing at a rate of just under 8%. My guest for this episode loves the HR industry but was looking for a change, a reinvention if you will, of herself and her career. I’m excited to dive into this topic as increasingly we are looking for new jobs, new challenges, or looking for ways to reinvent ourselves as our lives change, evolve, and grow. A special thank you to my podcast sponsor, ClearCompany.

Episode 166: What Career Reinvention Looks Like in HR with Angela Shaw

Today, I’m joined by Angela Shaw. Angela is an HR Manager at FORMASPACE and the President of the Austin Human Resources Management Association. In this episode of the Workology Podcast, Angela isn’t afraid of talking about how life changes and challenges have helped shape her and the work she does in HR. Angela’s catalyst happened when she experienced divorce and made the decision to move from working in state government human resources to the private sector. These changes set her on the path to change, building relationships and connections through volunteerism, networking, and setting personal and professional goals for herself.

Angela has been extremely involved in the local SHRM chapter and now serves as the President of the Austin Human Resource Management Association, where I’m also a member. The Chapter has a legacy and is known for great programs like their Stepping Stones HR Mentoring program, but Angela and the chapter leadership team have big plans and want to continue to support Austin and the HR community. The Austin community, including the HR community, has experienced tremendous growth. Angela talks about the ways in which AHRMA is focusing on serving the larger business and HR community.

Beyond Angela’s volunteer work in SHRM, she has set some lofty and scary goals for herself. One of those was putting herself in front of groups and events as a public speaker. I love Angela’s willingness to put herself out there, learn, and experience new things. She doesn’t shy away from expanding her horizons as well as talking candidly and openly about being a woman of color working in the human resources industry.

Angela shared some of those challenges. I found her openness and willingness to discuss refreshing. It’s important to learn, understand, and listen to each other.

She says, “The truth is that discrimination, unconscious bias and microaggressions do exist. And so for me, as a woman of color, these are the barriers that can prohibit a worthy candidate from being successful.”

Angela’s focus is on doing something positive with sometimes negative feelings about different situations. Her goal is to be the best qualified candidate, getting herself around barriers that she says we all know to exist. This is one of the reasons she saw value in getting her HR certification and her bachelor’s degree while also gaining experience in different industries. It’s also the reason she speaks, networks, and continues to put herself out there, sharing her personal and professional experiences.

I really love Angela’s honesty and her willingness to share her own challenges, successes, learnings and struggles. I find it takes a lot of courage to do so. Career reinvention is very personal, and it starts with really taking the time to know, understand and listen to yourself. And I think that spending some time getting to know ourselves is something we could all do a little more of. I hope that Angela’s journey has inspired you. I know it has inspired me.