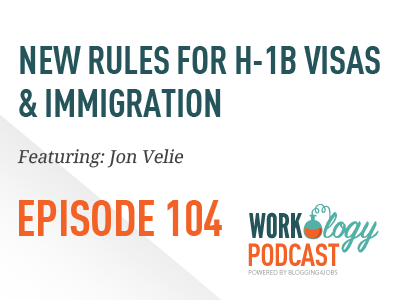 In 2017, there will be 65,000 H-1B visas granted to over 300,000 applicants. Given the crazy economic climate right now and a lot of uncertainty with regard to immigration and President Trump’s administration. I thought we would talk about the things as business leaders can expect, what we can change and the impact that immigration has on our business, HR and the economy.

My Workology Podcast guest today is Jon Velie, the CEO of Online Visas. Jon walks us through what we as employers can expect as the April 1st H-1B visa deadline draws near especially since the recent executive order signed by President Trump has shined a very bright spotlight of the topic of immigration, visas and potential changes employers can expect.

One of the biggest surprises for myself was learning about the H-1B visa lottery and how the deck is often stacked against small employers who are submitted a smaller number of visas which Jon talks about in the podcast. Jon also talks about the importance of Indian outsourcing companies to the technology industry and how changes in the number of H-1B visas issued in the future will not just impact larger employers like Google, Facebook and Microsoft but more importantly smaller technology companies and employers who rely on outsourcing companies for part-time and project-based work. Surprisingly, the largest number of visas awarded isn’t just Silicon Valley tech companies but includes a number of technology outsourcing companies who provide contingent and specialty consulting work to organizations who don’t employ full-time STEM workers but rely on outsourcing to fill the gaps. I’ve linked to the article and report we point to in the podcast in the recommended resources shared below.

The economic climate and certain the topic of immigration is uncertain. The first executive order that created the travel ban is has been placed on hold by a number of courts allowing for immigrations from all countries including the 7 that the order mention to travel in out of the country freely at present. Jon walks us through on a basic level what the travel ban entailed, who it impacted and how it was lifted.

HR’s Role in the Future of Immigration

Aside from the discussion concerning H-1B visas and the changes that President Trump has already made and will likely make concerning immigration and the impact on employers, Jon talked in depth about how HR and business leaders can help influence the future of immigration specifically when it comes to expressing your concerns, points of view and pain points to your local government representatives. Jon urges leaders to start dialogues with elected officials as well as working with your professional associations like SHRM, Chamber of Commerce and other organizations so that we may express our opinion but also lobby for the interests of our industry as HR professionals but for the organization you represent.

Jon shares how immigration workers in the U.S. are helping to create jobs not eliminate or take away jobs from Americans as the media has reported. Jon sites a shocking statistic that shows that for every H-1B visa holder up to 40 jobs are created by the business and to support that STEM worker.

We will likely see changes when it comes to immigration Jon tells me but in form of a second executive order that has been leaked, however, it has yet to be signed. It will include and suggest for research on immigration and the impact on employers and U.S. businesses as well as the need for more immigration field agents. Jon shares a number of strange cases and examples he has already encountered since the November election. Listen to the podcast to hear more about Jon’s immigration predictions and where changes will be happening.

Connect with Jon on LinkedIn.