Lifeguard Lessons: When to Break the Rules 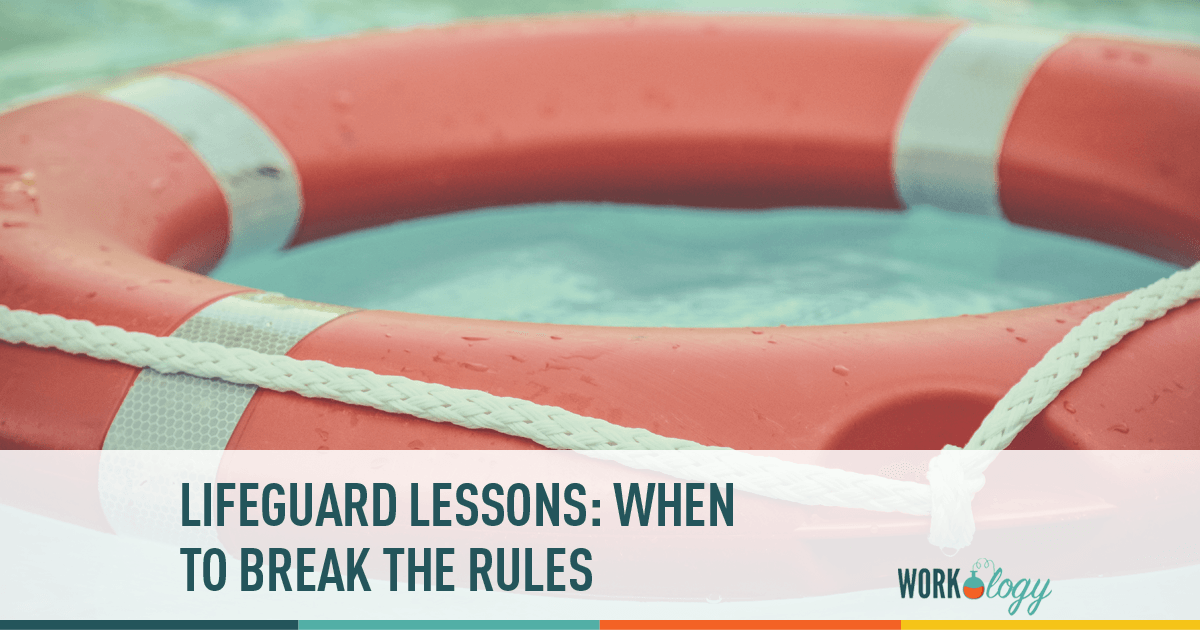 In case you haven’t heard, a lifeguard was recently fired for saving someone’s life. It seems like a strange tale, but it can tell us some important information about being inflexible in the workplace. Certainly Orlando-based company Jeff Ellis and Associates are currently wishing they had let cooler heads prevail before firing 21-year-old employee, Tomas Lopez.

Lopez was fired after saving the life of a swimmer in trouble. The only problem? This swimmer was in a section of the beach not protected by the company, opening them up to liability issues. The irony of firing a lifeguard for guarding someone’s life wasn’t lost on the media, who immediately picked up the story. It went viral and Lopez was offered his job back with apologies, but he turned it down.

What can we learn from this tale of mismanagement that is also about employer risk? You know what they say, rules are made to be broken. In HR and hiring, this is not often the case. We stick close to the rules and employment laws because they exist for a reason and because they protect us from liability. Sometimes, however, the rules just can’t take into account every possible scenario.

Here are some things to do before deciding whether to follow the letter of the law or step outside the rulebook when it comes to employee relations and workplace investigation situations:

Always review on a case-by-case basis

Remember the rules are general guidelines put in place to help you make decisions, not make the decisions for you. In this case the Orlando-based company fired the lifeguard for, in essence, doing his job. The rules about the beach existed for liability reasons and to keep guards at their respective points. These rules did not exist to keep lifeguards from saving people.

When looking at infractions in the rules, look at all the details of the case. Were there extenuating circumstances? If so, were they strong enough to override the rule? Always look at the circumstances before jumping to a decision, whether it’s firing or hiring.

Had the manager who abruptly terminated Lopez actually listened, perhaps this whole mess could have been avoided. This goes back to our last point. If you don’t listen to the circumstances, you won’t understand what really happened.

Whether it’s a company misdemeanor or something wrong with a resume, always listen to all sides. If you’re interviewing a candidate, either in person or through online video, and something seems strange, ask them to explain instead of merely writing them off. Put your listening skills to good use.

Realize some rules are made to be broken

The strong reaction and viral nature of this story of an employment involuntary termination stems directly from the fact that in this case the rule stood in opposition to common sense. Know your rulebook, work with you employment law attorney, and be familiar with US labor and employment laws, but more importantly, know when to throw it out.

In hiring, this can mean everything from embracing new technology to hiring a candidate who deeply impresses you despite being a job hopper. The rules of the traditional hiring and firing process are constantly being rewritten, after all. There will always be rules which are meant to be broken and rules which apply poorly to some situations. Don’t be the person who sticks to the written law in face of opposition from reality. This way you and your company can avoid being a viral punchline.

When do you think it’s ok to break the rules? And what should you do before ignoring the rulebook?