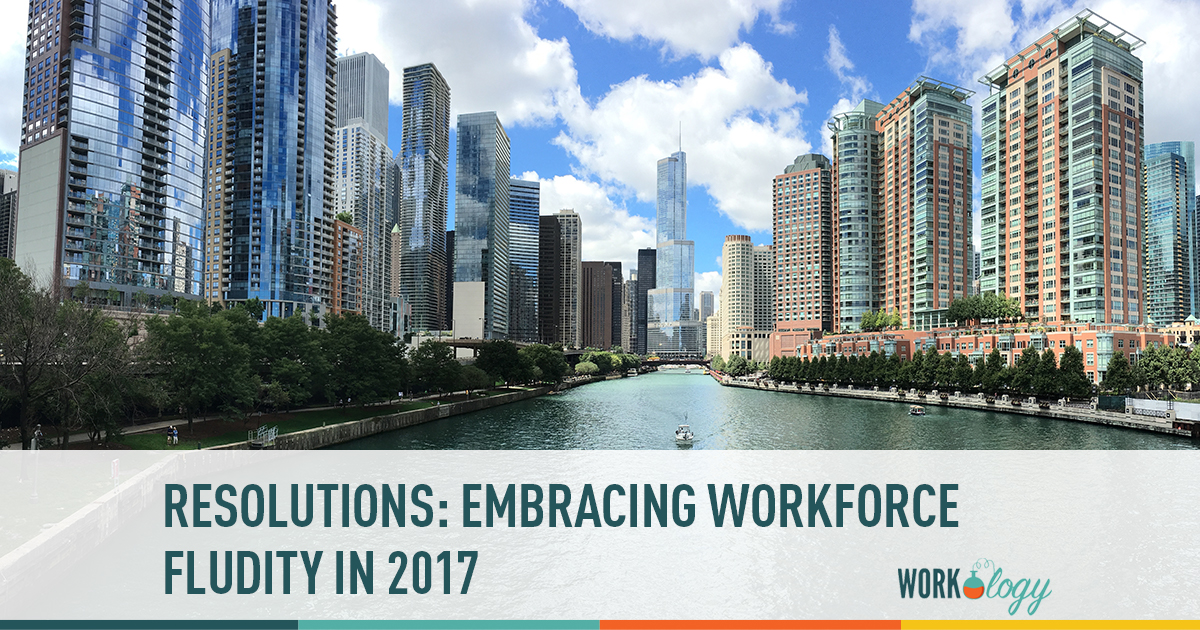 Change is hard and can make us uncomfortable. That may be why 80 percent of New Year’s resolutions fail in the first week alone. But, change is upon us and it is here to stay.

Every year, the Oxford English Dictionary (OED) adds hundreds of new words. This year, they added the term “gender-fluid.”

gender-fluid (adj.): denoting or relating to a person who does not identify themselves as having a fixed gender.

In order to consider adding a new word, the OED editors must deem that term a significant and notable development in the history of the English language. In fact, the term “gender-fluid” has been in use for many years within the LGBTQ community, and its addition to the dictionary this year reinforces its validity to a larger audience.

The term itself, describing someone who doesn’t necessarily identify as male or female or who might feel rather female one day and rather male the next, signals a growing recognition and acceptance of people who choose to identify outside the traditional gender binary.

Editor of the OED, Katherine Martin, shared that of all the evolutions going on in the English language, she sees the “speed at which the English language is expanding” to accommodate identities like this to be the most thrilling, from her perch as an observer. That speed is no doubt thanks to the Interwebs.

The OED editors aren’t the only ones taking note. In 2015, you might recall that the American Dialect Society selected the word “they” as its Word of the Year and The Washington Post added “they” to their style guide to accommodate “people who identify as neither male nor female.”

This seismic cultural shift in how people define themselves can be seen as an extension of the movement toward self-definition and nonconformity that began after the 1950s. Yet, it has reached a point where people can now choose to reject classification entirely.

Regardless of how one reacts to the notion of not feeling particularly male or female on any given day, I’m sure those of us in HR can relate to the increasing importance of maintaining an open dialogue about identity fluidity inside the workplace, as well as outside.

Our complex nature as human beings makes each one of us a singular person. Our choices to be who we define ourselves to be is legally protected by our constitutional rights. The Civil Rights Act of 1964 further protects these choices in the workplace, disallowing discrimination in job hiring, termination, and promotions based on a person’s race, color, creed, and gender.

Today, people express their identity more fluidly than in previous years. We’ve always worn many different hats, publically and in our private lives, but with the proliferation and pervasiveness of mobile technologies and the speed of business change, we are also increasingly blurring the lines between definitions of profession, work, and how we identify ourselves—something I call Workforce Fluidity.

Job fluidity—people not tied to or identified by a specific job description, but able to flow between initiatives and supervisors to maximize their contribution—the choice of work assigned in partnership and considerations of the person’s curiosity and competence, as well as organizational need;

Organizational fluidity—the reality of how works gets done, alternative collaborative constructs, the absence of formal organization structures, and even team-based hiring and compensation; and finally

Identity fluidity—the self-definition of people, who may reject generational stereotypes, categories, or the limitations of binary identity categories “black” or “white,” “male,” or “female,” as Facebook has by offering users 71 identity attributes to choose from when creating one’s profile.

Workforce fluidity encompasses not only flexible/virtual work assignments and the emphasis on collaborative teamwork, but also considers flattening corporate hierarchies or doing away with them in favor of a more dynamic and temporary grouping of people around solving a work problem or initiative. It also can mean eliminating job titles or even the entire construct of a job, valuing contributions to multiple teams and results instead. Finally, it encompasses the notion that every person—each team member—is a unique person, to whom respect, understanding, and consideration must be accorded to ensure their individualism is not diminished, intentionally or unintentionally.

I believe organizations that fail to thoughtfully address workforce fluidity in all its forms could run the risk of becoming less appealing destinations for employees and job seekers alike.

HR professionals have a unique opportunity to welcome gender-fluid individuals within their organizations to ensure that they can be their authentic selves at work and contribute to their full potential. According to Ultimate Software’s 2016 National Study on Satisfaction at Work, 95 percent of people think the ability to truly be oneself at work directly affects their level of satisfaction and engagement at work. The study also uncovered that emotional safety is more of a “deal breaker” for people than physical safety, particularly for women. In fact, nearly 7 out of 10 people would leave a job at which they did not feel emotionally safe—free of harassment, intimidation, and offensive behavior. Additionally, the study showed that 75 percent of employees say having organizations listen to and address their concerns is critical to their retention.

Just as HR learned to accept that frequent job changes may not necessarily be a red flag, as they might signal a highly motivated individual who seeks to expand their horizon and develop more rapidly than is currently possible in a single job today, HR can also lead organizations to recognize a person who sees themselves in fluid terms may be particularly well suited for the rapidly changing, dynamic world in which we operate.

So, what can HR leaders do to guide our organizations to maximize the potential of and humanize the workplace for all people, including people who think of themselves, their work, and their development in new ways? Creating a humanized workplace is key. This means recognizing that an organization’s “people philosophy” matters more to people than the company’s mission or core values. Despite this, nearly half of the U.S. working population feels they’re not being treated fairly at work.3

To create this positive employee experience for all employees, organizations need to assure what their people philosophy says on paper also translates to employees through what they practice. HR can start by revisiting these existing processes and policies to ensure that people can bring their authentic selves to work:

It starts with a candidate’s first contact with your organization. Examine your recruiting requisitions to ensure you use unbiased language to attract the best people, rather than a certain stereotype.

Follow up with a more open onboarding process, being explicit about your people philosophies that support inclusion of new ways to identify oneself, and making sure individuals know about company-sponsored groups and employee communities.

Employees won’t always tell you what they’re thinking, particularly when they feel they’re in the minority. Leverage advanced technology to “see” how employees are really feeling. Sentiment-analysis software can take the guesswork out of HR, and help you and your leaders avoid misreading important cues.

Revamp leadership-development programs to expose unconscious biases  that help to promote individuals based on true leadership, communication, and openness abilities. Algorithm-based predictive analytics can give people the management tools that take bias out of the equation and help leaders truly listen and respond to employee concerns. Next, put checks and balances in place to ensure leaders are truly open to the universe of talent within the organization, by inviting gender-non-conforming individuals into the decision-making processes.

Finally, expand the kinds of diversity you measure and focus on identifying gaps or shortcomings in inclusiveness, then put in place policies and education to progress toward your goals. What is not measured is much less likely to be seen and changed—make your diversity data tell a story!

HR Leaders can rise to the occasion and model behaviors to support our employees and ensure that those accommodations do not cause undue duress on other employees. After all, employees are our customers. It is not our place to judge them, but to serve them. And, it’s our job to make our organizations a more human environment.

This piece originally appeared on the SHRM Blog here. Its author, Cecile Alper-Leroux, is Ultimate Software’s Vice President of Innovation. With more than 20 years’ experience in both national and global markets, Cecile is an internationally sought-out speaker, thought leader, and visionary on human capital management trends, hot topics, and global strategies

Workology has an exclusive syndication partnership with the SHRM Blog. Their community is committed to providing real resources for real workplace, HR and recruiting practitioners.
Search