Effective Onboarding: How to Introduce New Leadership to a Team 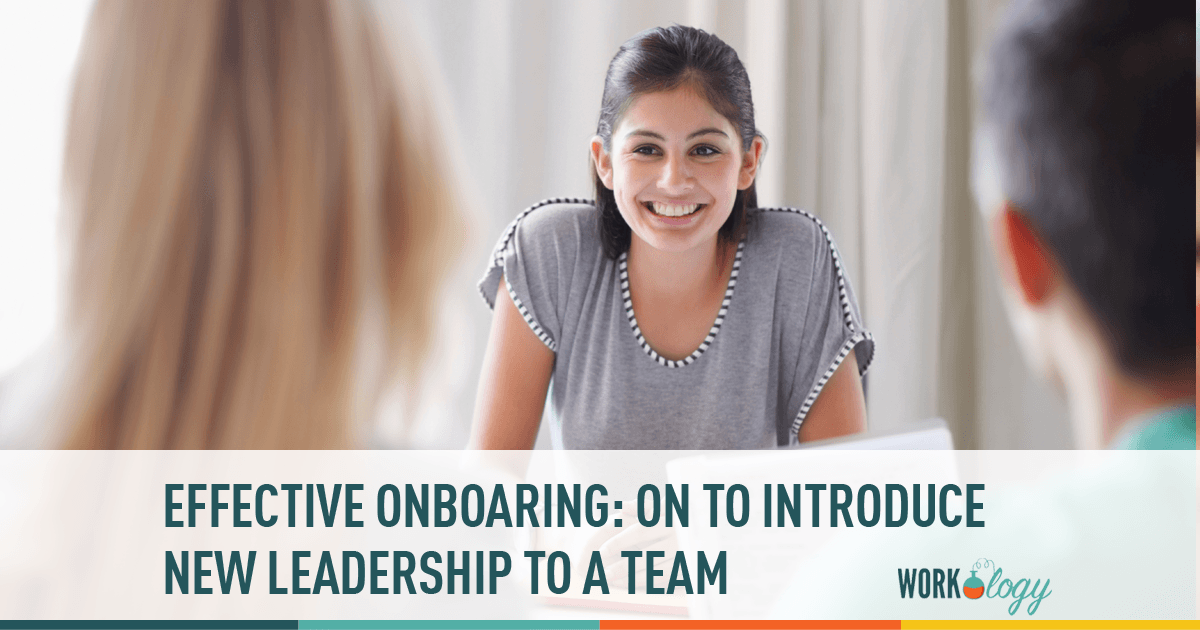 Depending on the circumstances, introducing new leadership to your team is both exciting and challenging. Your new hire is highly qualified, motivated, and will likely be managing employees who may have been with your company for years prior to their arrival. They’re also highly paid and brought on to make a big impact. The risk associated with this type of hire is much higher and missteps can be devastating to your business and your morale.

Executive failures can put your company back up to 40 times their base salary. So how do you protect yourself and your team and set your new leader up for success?  Successful onboarding is a good way to start. Once you’ve found someone you think will be the right addition to your team, the work of making sure they can mesh well with the culture of your business, work with the people they’ll be supervising, and hit the ground running begins.

To increase the likelihood that your new leader will be a long-term and valuable addition to your team, follow these guidelines.

Start As Early As Possible

Half of the executives brought on to a new team quit or are fired in their first three years. Even for executives who have been promoted or who moved over from other positions, 40% don’t work out within the first 18 months. There are many reasons why some executives just don’t work out—sometimes it’s as simple as starting off on the wrong foot.

One mistake many companies make is not beginning the onboarding process before day one. Instead, introduce the candidate to your business as soon as they have accepted the position. When MasterCard hired current CEO Ajay Banga away from Citibank in 2009, Banga spent his first year as COO reporting to the CEO. He then transitioned to CEO with his predecessor in place to advise him, before eventually becoming a CEO with full independence.

Throughout this transitional period, Banga went out of his way to introduce himself to all MasterCard employees. As he put it, that meant meeting “people outside the big offices.” He traveled to all of MasterCard’s offices around the world, getting to know everything about its workplace culture and how it did business. The results of this strategy speak for themselves. Six years later, Banga is still head of MasterCard, and the company is as profitable as ever.

Of course, not every company has the luxury of spending a year grooming someone for a new leadership role. Sometimes new leadership needs to take ownership and deliver right away. In these cases, there are still ways to ensure success.

When Joe Cabral started at the Cleveland Clinic as chief human resources officer, he was given an “Executive Book of Knowledge” that contained important basic information that helped him do his new job. After going through the book, Cabral still met with experts on the major topics covered in it to get a better idea of how the clinic worked.

If you’re bringing someone in from outside to fill a role, remember that every company operates differently so don’t assume they’ll immediately understand how you work, or what’s expected.

Providing this information early on can be instrumental in creating adaptive leadership. Be sure to include things like:

Change is difficult, and reactions to having a new boss can include frustration and anger. It’s not unusual for employees to quit soon after new leadership takes over, even if that new boss is doing a great job. If an existing employee feels they were passed over for the position, they may be hurt and resistant to change.

So what’s the best way to get employees used to new leadership? Nathaniel Broughton, a partner at Plus2Capital, suggests setting the tone early.

Schedule meetings with employees who will be directly affected by the change as soon as the hire is official. Listen to their questions and concerns. This might mean meeting privately with some employees who don’t want to ask questions in front of their peers. Be honest and open about the changes.

Meet with the incoming leadership, too, and be sure to give them some background on the social dynamics of the office. If certain team members are likely to feel hurt by the new arrival, the new executive should be made aware of this, since introducing higher leadership has higher stakes, and higher impact.

Most importantly, Broughton says to be patient with the process. Change management is never simple — it takes time for people to get used to new leadership, and that’s not something you can rush.

A 2015 Gallup poll found that roughly half of American employees don’t know what’s expected of them at work. This is an issue that can cause problems with all workers, and huge headaches if it creeps into leadership.

Far too often, new leaders come into a business with a fancy new title, a brief job description, and maybe some information about how the company works, but they don’t actually know what’s expected of them.

Employees at all levels need to know how their success will be determined:

These are questions that need to be addressed early during hiring process to allow the executive to create a solid plan, and then reiterated once onboarding begins to ensure a smooth transition to new leadership that will stay in place for years to come. For some companies, codifying these expectations has helped employees at all levels of their organizations thrive.

One such approach is the OKR system. In the 1970s, Intel President Andy Grove introduced the concept of OKRs (objectives and key results). The goal of the system was to give people a clear understand of goals and results expected of them. Nowadays, this system is used by many companies, including Google, and can be leveraged by new executives to serve as motivators for their new team.

The first few months for a new executive are critical. The “first 100 days” was coined by U.S. President Franklin D. Roosevelt in 1933, referring to his first days in office and the immense impact he made from the start. Regardless of the exact time frame, the ripple effect during this time sets the tone for the weeks to follow. Here are a few key steps:

Finding the right leadership for your business is a big challenge, and getting them adjusted to your corporate culture isn’t always easy. However, these are not insurmountable tasks. Many companies not only survive, but thrive when new leadership is brought in.