Don’t Just Gloss Over the End of the Year: Pause and Celebrate Accomplishments 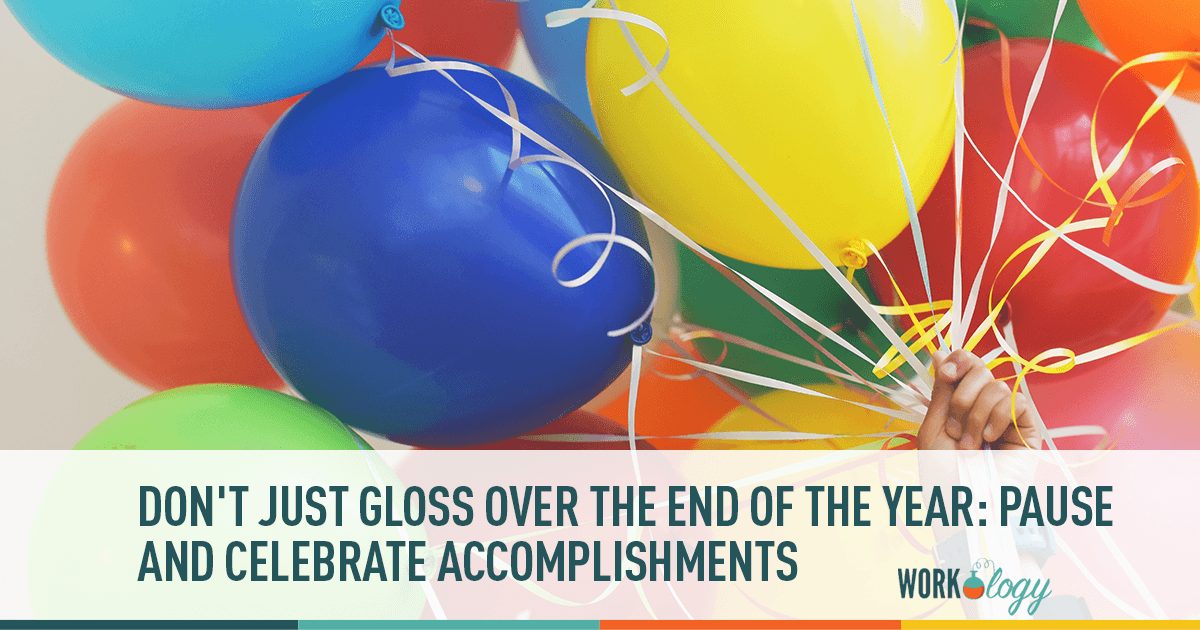 Thanksgiving was just last week, but my head is already well into 2015. I’ve all but checked the box on 2014 and there is still a month left to go. Its a bit of my personality — I reach a milestone, check it off my list and then I’m on to the next one. Its actually one thing that I would change about myself — and I have to give myself reminders to do this… and I want to give you this reminder too.

Take Stock of All That You Did

You and your teams are probably doing this already as you get ready for end of year reviews. However as your teams (and sit down yourself) and recall all the things that you’ve accomplished over the year — EVERYTHING. You have a list of things that you wanted to do, things that you did, and things that you didn’t get to. You may want to focus on that third list — what you didn’t get to do — don’t ignore the list, but also don’t fixate on it (yet 😉 ) Focus on what you DID! You’ll likely find that there are so many things that you accomplished that was not on your “things to do” list. You’ll get a chance to ask the question “why” they don’t line up exactly — but before you do that — just make the list. INCLUDE EVERYTHING, not just the project work or major initiatives — all the work. Include numbers and metrics if possible — and ask your team members and stakeholders to help you create the list.

Think About Your Partners

You didn’t do it all yourself (even if you’re an HR team of one 😉 ). Who did you partner and collaborate with? Think about individuals, teams, departments, vendors, and other workers. List them all!  I’m always amazed whenever I do this how many people I work with over any given year or across a project.

Do what makes sense for your company and your culture, but don’t be lazy about it. Really play it up! Many of you know I’m a fan of handwritten cards and small gifts (Individualization is in my Top 5 strengths) but do YOU and be SINCERE. That means just taking the time to focus on all the things that completed — don’t pair it with a lessons learned, what you could have done better, or what you should have done. Don’t gloss over it and talk about what you need to do next year. You can (and should) do that later — but make it separate. You are purposely taking a moment to say THANK YOU and ACKNOWLEDGE the work that has been done. If you pair it with something it may come off as insincere or as an after thought — even it if it wasn’t your intent.

Often we want to take time (fewer meetings, especially around the holidays) or money. If this a concern, get creative about HOW you celebrate — you have a number of alternatives to having a large all hands party. I personally like potlucks, leaders making breakfast for the team, small team celebrations. But there are dozens of ways to say THANK YOU and CELEBRATE. If you have trouble coming up with ideas, get with some people on the team, those “creatives” that you know,  or some of your communications or marketing people in your organization for some ideas.  You want to be in the moment, which means doing it timely. Ideally end of year or at the beginning of the year — do what makes sense for your business and customers, but don’t let it get too far into the year before you have your celebration.

Once you have acknowledged all the awesome work that you and your teams have accomplished — you have some great information to use to take into the next year. NOW you can talk about lessons learned, why the lists don’t match up, ask questions about competing priorities, question if you have silos or the right people working on the right things… and incorporate those into the 2015 work plans.

What do you think? Do you celebrate end of year accomplishments? If so, how? If not, what are your thoughts about that?