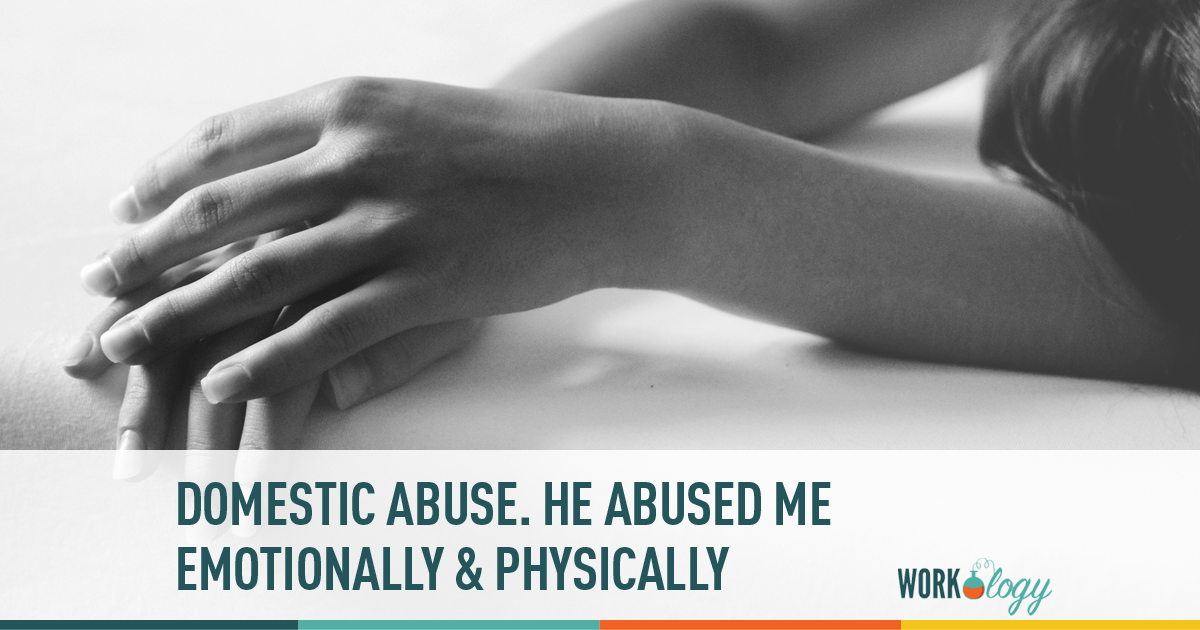 It was fall of 2004, and I was an emotional wreck.  It was a Friday and I made the call to my boss telling him I was calling in sick for the weekend.  As an HR Manager in a retail environment, I generally worked 1-2 weekends sometimes more a month.  These weekends were a great time to get to know my employees.

This weekend was different though as I sat crying and emotionally drained on the front porch of my home calling to deliver my boss the news.  I called my boss, the store manager on his cell phone to tell him I was sick and couldn’t come to work which in fact was a lie.  I was not sick.   Earlier that evening, I had made the best and most difficult decision of my life, telling my then husband that I wanted a trial separation.  I knew what was happening in my marriage wasn’t right, but I wasn’t yet ready to call our nearly 7 year relationship to an end.  He couldn’t be domestically abusing me.  I was successful, educated, and not one of those defenseless and poor abused women.

Why Do Women Stay in Abusive Relationships

He did things like hit me on occasion being very apologetic after the fact.  This was usually accompanied by some sort of alcohol-induced rage.  Once he cracked the windshield of our car while I was driving home.  He was in the passenger seat.  Upon getting out of the car, he picked up a giant rock in our yard and tried to throw it at me.  He never was one to yell names and had a way of chiming in during conversations making me feel small and insulting.

Things like this are not okay, and I was shocked to find out that 37% of middle schoolers 11-14 years old have experienced dating violence in the United States.  So I made that call to my boss a complete wreck and the words came tumbling out, “I’ve left my husband and asked him to move out.  I think I need to take the weekend off work.”

You would expect most managers or human beings to offer an apology or be supportive, but not my boss.  Jim, who looked oddly like a pudgy Dilbert complete with black boxy glasses only said the following to me before I hung up, “You aren’t quitting your job are you?  I can’t have you quit at a time like this.”

Of course, pudgy Dilbert had no idea what was going on, or the reason I was taking a trial separation, but his words further devastated me and within a few weeks I was making arrangements to transfer with the company to a different location.

Several weeks later I arrived back at my house after driving to see my family in Kansas for the Thanksgiving holiday.  My ex had entered our former together home that I was now living in alone and financially responsible for removing many of our joint belongings so I changed the locks.  He called my office 30 times or more a day and followed me to and from work.  He cyber stalked me online using his friend’s computers and identities, and I feared for my life.  I lived in a nightmare even after the divorce was final even after relocating, transferring with my company, and moving to another city as the man I once love traumatized my new life.

The law was not on my side as according in the state of Missouri.  His stalking behavior was not illegal. We had not officially separated and since our separation he had not threatened or laid a finger on me. He was careful.  He didn’t send electronic messages or leave voicemails.  It was subtle torture and intimidation.  Getting my work phone call log was a hoop-jumping nightmare.  A police officer did make a call to his parents home asking him to leave me alone only after I begged him to do so.

The day the divorce was final I sat alone in a courtroom with a stone face.  It was only until I walked to the elevator alone that I cried with relief and sadness at the same time.   I felt like a failure even though divorce statistics tell a different story with 50% percent of first marriages, 67% of second and 74% of third marriages ending in divorce, according to the Forest Institute of Psychology.

And now 7 years later since the divorce is final, I believe that that moment was the best and most important decision in my life.  In fact, it saved my life.  Sometimes divorce is the best and only option especially for situations like mine.  I had no choice but to leave that toxic and abusive environment.  My very life depended on it.  It helped me realize that I have the power and strength to follow my dreams and to not let others manipulate even out of love.  I learned I was in control.  It led me to Greg, my now husband of 5 years and the birth of our daughter, Ryleigh.  Women do not ever deserve to be abused, or beaten emotionally or physically.  There is never a reason.

I was inspired to share my story after seeing a friend of mine on Facebook share a story that brought back the memories from those very traumatic days.  From his house, he heard a man screaming, a woman cry, and several slaps.  Michael Long found a young girl, the daughter of a neighbor in a confrontation with her boyfriend, and my friend took control of the situation.  Removing the young man, telling the girl’s father, and telling that girl she never-ever deserved to be treated like this.  Domestic abuse is never okay or the answer.

Stand Up Against Abuse.  Call the National Domestic Abuse Hotline.

My friend’s story brought back many emotions and led me to write this post.  A women never deserves to be hit, ever.  And I share my own personal story in the hopes that my daughter and the daughters of others never have to experience the shame and hurt I went through.  If you are being abused, please contact someone immediately at the National Domestic Abuse Hotline or call 1-800-799-SAFE.  Retweet and share this message today to let others know it is not okay for women, children, or any person to be abused.

My Special Note to You

I receive a number of search engine searches that lead to this post from women who are looking for answers. If he is hitting you, threatening you or has hit you, it is physical abuse. I used to tell myself that it was only a couple times and didn’t happen often and that was my excuse, but it did happen and it was wrong. I’m pretty sure if I hadn’t left I would be dead.

I’m telling you that there is light at the end of the tunnel and that you have options. It’s okay to be scared. It’s okay to be unsure of yourself, but it’s not okay to do nothing and let it keep happening. Please call the abuse hotline, go to church, talk to your parents or someone you trust that can help remove you from the situation and leave him. Leaving him was the best decision I’ve ever made in my life. It was also the hardest ones, but now it seems like another lifetime. I started a new life. I have thrived and I’m so happy I had the courage leave him. I want the same for you.