Do Employers Really Use Myspace? 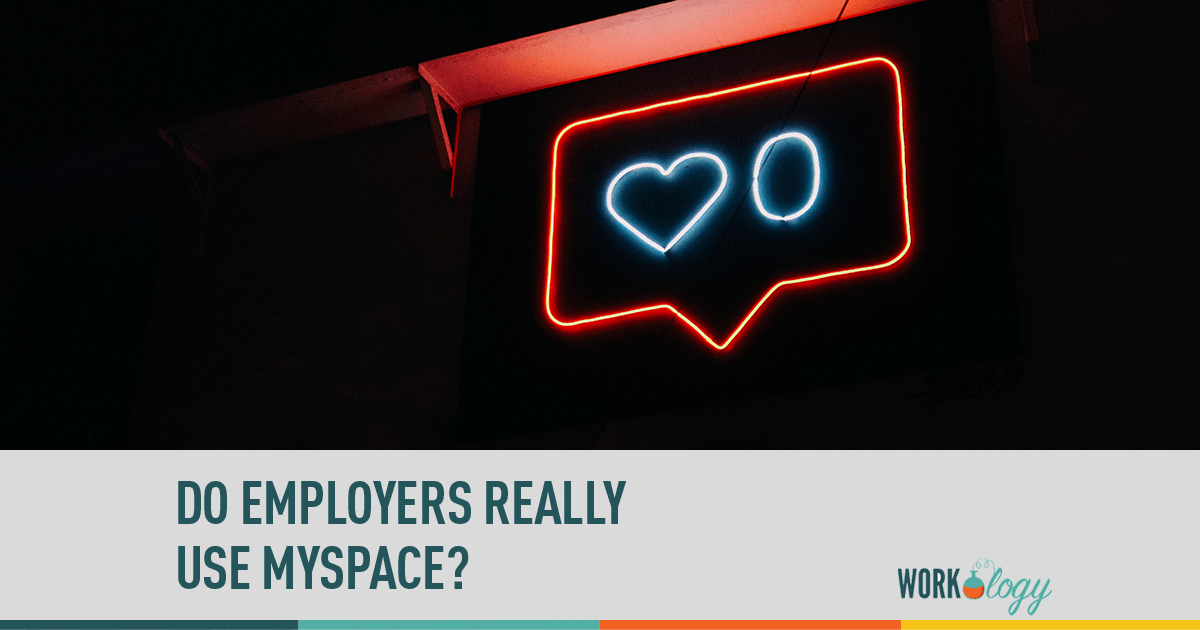 Take a look at the article from http://www.collegerecruiter.com/ highlighting a professional friend of mine, Lisa Graham. Lisa is a great recruiter and has a great deal of success from recruiting on social networking sites. Interestingly enough, the article that highlights Lisa was written after she posted a comment on someone else’s article post. See below.

Do Employers Really Use Myspace?

Do Employers Really Hire Candidates from Facebook and MySpace? FurstPerson / Sprint Does.
I recently read an article at ERE and noticed a comment posted to it by Lisa Graham, Client Relationship Manager for FurstPerson / Sprint. Lisa’s comment caught my eye because she wrote that she’s made four good hires from MYSpace and had multiple potential candidates ask questions about her positions and express interest in them. She’s had similar responses from Facebook. And to make her comment even more intriguing, she admitted to being a relative newbie as she’s only been using MySpace and Facebook for about six months.
I emailed Lisa to ask her to share her wisdom and she very kindly obliged right away. Lisa hires for Sprint’s contact center in Oklahoma City. They focus on tech support but have some customer service positions available as well but the customer service department is smaller and her group does not hire for it very often.

The tech support group has three tiers: tech, advanced tech, and tickets. Her group hires only for the first level tech support. Employees in that area are promoted into the higher two groups. Together they support Sprint’s wireless devices including some of the more complex BlackBerry and other PDA-style phones and the wireless air cards. As you can imagine, their workforce skews young. Sprint’s only age requirement is that the employees must be over the age of 18 and they do hire some retirees but the tech skills they’re looking are more commonly found in younger rather than older employees and they’re even more commonly found amongst people who are using these sites as the ability of a candidate to use the sites at all indicates that they’re at least somewhat tech savvy. Which leads us to Lisa’s decision to use MySpace and Facebook as part of her recruiting arsenal.

So what did Lisa do? On MySpace she created a personal profile, set it to private, and then placed a classified ad. She checks her MySpace account daily to answer any emails she receives regarding and to-date has hired at least four candidates and had numerous interested inquiries from candidates. She tries to update her ads at least once a month and sometimes even more frequently depending on the number of positions she has available.

On Facebook, she set up her entire profile as one big recruitment ad. She lists events for any on- or off-site job fairs she attend or hosts and has joined area networks so when she posts information about her job fairs to her page that information also gets displayed on the area network pages. She’s also purchased Facebook Flyer advertising to be sent out to the network in her area and looks for people that she knows and adds them to her friend list to build her network. LIsa has also posted ads in the marketplace. As she does with MySpace, Lisa checks her Facebook email daily and keeps her page updated.

Interestingly, Lisa’s efforts so far on Bebo have so far failed to bear fruit. Bebo is more popular amongst high school students than Facebook (average user age 25) and MySpace (average user age 35). Perhaps she will need to adapt her strategies and tactics for Bebo or perhaps the demographics are too different and she’ll end up abandoning her Bebo efforts. Time will tell.
Lisa’s story is inspiring. Too often I hear recruiters and hiring managers bad mouth social networking sites such as Facebook and MySpace as being wastes of time. When I scratch the surface a bit most of them either haven’t spent any time on the sites at all or haven’t invested nearly enough to form an accurate opinion. Lisa took the plunge and continues to invest time virtually every day. She understands that first and foremost these sites are about networking so she networks. She keeps her pages updated so that her “friends” are continually reminded in a soft sell way about her and the opportunities she has available. They may not all have been interested in working in tech support for Sprint six months ago when Lisa first started using the sites and they may not be today but some have been and some will be. And Lisa has hired some already and will certainly hire some more.