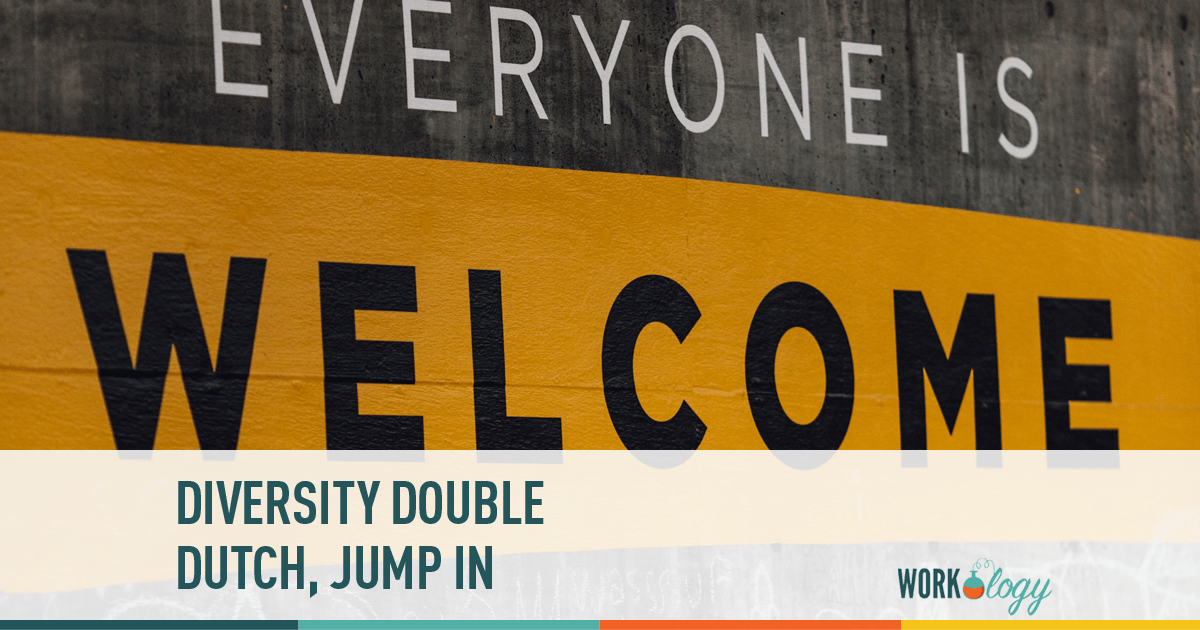 At the close of 2014 I wrote a reflective piece about how one of my childhood dreams inspired me take the annual performance review seriously. As a child, I longed for the ability to jump Double Dutch with such precision and expertise that I could remake Frankie Smith’s “Double Dutch Bus” and embark on the first worldwide jump-rap concert tour. Despite my mother’s, sister’s, aunt’s, and various church friends’ best efforts, this dream was not achieved.  I never learned to jump rope.

I considered the advice I gave myself and thought about how I might apply it today. With sexism, racism, homophobia, xenophobia, and all forms of bigotry and hatred so prevalent today, there is a need for organizations to address diversity and inclusion in a meaningful way. Organizations will be challenged to boldly approach, discuss, and manage diversity and inclusion issues instead of the tentative fashion in which they’ve found comfort.

Using the same guidance, here’s what organizations can do.

Jump in! Click…clack…click…clack…click….clack…”I would watch the evolution of the rope, rocking to the beat, halfway through an entire chant, and waiting for that perfect moment. Eventually, I would give up, be told I lost my “turn”, or worst of all, someone else would jump in before I “got my heart”.

Fear kept me from jumping in.  I believe it is fear of the unknown that also inhibits organizations from showing a commitment to creating diverse and inclusive cultures. The first step is to make a deliberate effort to hire diverse talent.

While I would shy away from taking spelling tips from Starbucks; following their lead with respect to diversity hiring would earn a gold star.  In 2013 they pledged to hire 10,000 Veterans and military spouses by 2018. To date, they are just over 1,000 shy of reaching that goal which puts them ahead of the proposed schedule. Additionally, in response to the recent executive order, Starbucks  “jumped in” and pledged to create jobs for 10,000 refugees over the next five years.

Accept honest and constructive feedback. The longer I hesitated, the more I heard, “Go!” and “Now!” Everyone was giving me advice on how to best get in the rope and how to sustain once I got there. Instead of listening and applying their sound advice, I got defensive and shut down.

It’s time to engage in courageous conversations about diversity. Doing so requires a person or persons dedicated to these efforts as their primary job who will create the safe places needed to have these complex discussions.  The Diversity Leader should themselves be diverse. It is more authentic when a person has experienced what is like to be marginalized rather than merely empathize with disparate treatment.  Diversity and inclusion must be a priority not just recognition of the flavor of the month.

CoverGirl’s Male Ambassador, James Charles, came under fire recently when he tweeted a racist “joke”. By way of damage control, he issued an apology, but this isn’t the first time he’s made bigoted comments while representing the brand. In response to the backlash, CoverGIirl tweeted:

“We agree his statements were inappropriate but appreciate that he has issued an apology. We are an inclusive brand and respect all people and cultures.”

To many, including myself, this statement was disingenuous and vapid. This was a missed opportunity to take a bold approach and distance themselves from him. Doing so would have shown their customers that they are, as they say, a brand that is inclusive and respectful of all people and cultures.

Work through “the sting”. On maybe one or two occasions, I actually attempted or made it in the rope. But, the first time it smacked against my tender skin I was screaming (in my head of course) “Sugar-honey-iced-tea! Sum mumma bish! Eff this ish! I’m going home!”  To appease me and so I could still be part of the group, the girls made me the kitty. I would turn the rope while someone jumped/took my turn, for me. In the end, I learned to turn really well, pretending to be content as an outlier, always wishing I was the one jumping.

Back when I did internal staffing part of my job was to provide resume writing assistance to employees in transition. When it came to time to write achievement statements, it always puzzled me that the majority of folks found it difficult to answer the question, “What would not have happened if you hadn’t been there?”

On February 16th a host of immigrant workers found the answer to that question when they participated in #ADayWithoutImmigrants. For one day, they stayed home from work, did not spend money, and didn’t send their children to school.  Some employers couldn’t work through the sting. Instead of supporting and showing their employees that they value their contributions, some employers chose to terminate those who protested.

Organizations have been hanging on the outskirts and rocking to the beat while watching the evolution of the diversity and inclusion rope for far too long.  Not engaging in deliberate diversity is too risky. Jump in, talk it out, and work through the sting.