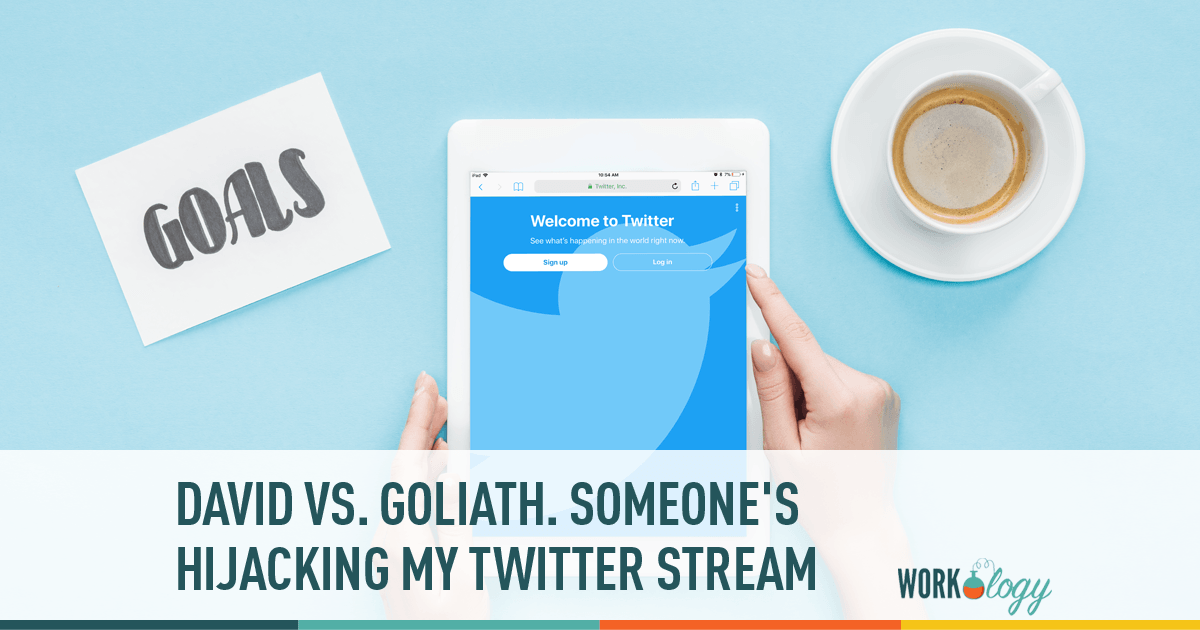 A couple weeks ago while at SXSW,  I was sitting in a panel session minding my own business and enjoying one of my favorite conferences of the year, SXSW.  In fact, I’ve been planning and plotting and anticipating this conference for months.  This conference for me is a true learning conference.  It’s here that I’m engaging peers and influencers outside of my niche, the world of HR & Recruiting, while learning from them and the current technologies and tools they are using, developing, and designing.

One of the sessions, I sat in during my time at SXSW was titled, “What’s So Bleeping Hard About ROI?”  The discussion centered around the dreaded conversation that many of us face when discussing social media to our senior business leaders at our organization.  So while I’m soaking up the atmosphere and conversation, imagine my surprise when . . .
When I learn that a vendor is using my twitter name, Blogging4Jobs as a sponsored keyword on the social networking site, Twitter.com.  A Twitter follower sends me a DM alerting me to the issue.  Apparently, she has a Twitter column set up on Tweetdeck with the keyword “Blogging4Jobs.”  Companies who work with Twitter as advertisers can sponsor keywords showing up at the top of the column when searched.  These companies pay Twitter so that their messages are the first in the search column to the tune of $15,000 over a three month period to use their service.  So a vendor in the human resources technology space was using a keyword to promote their Twitter account, and that keyword happened to be my Twitter name, Blogging4Jobs.

Let me just say that I was flattered.  I mean, I have worked hard to build a brand online.  I’ve blogged, tweeted, Facebooked, and livestreamed for more hours that I think I ever want to know.  And I’m glad someone noticed.  So when a company thinks enough of this blog and my Twitter following to make the decision to sponsor my name, I have to smile.  Of course, being on the social medias happens to be part of my job, and it’s also a labor of love as technology and social media when it comes to the workplace are in uncharted waters.  So when I learned that HireVue (@hirevue) used my Twitter name as part of their sponsored package with Twitter, I was excited.  I was excited until I realized that they were hijacking my Twitter stream and thus, hijacking my brand too.

So on the other hand, I’ve worked hard to build my brand.  The blog is now on pace to reach record breaking traffic numbers, and this year I’ve opened the blog up to sponsorships and advertisers for the first time.  Social media, my brand, consulting, and this blog are my business which happens to serve as a source of income for me and my family.  HireVue is a large company with a reported 500% growth.  In 2010, they acquired $5 million in venture funding and yet they choose to sponsor Twitter instead of working with me directly.

Maybe you are thinking, this isn’t a big deal.  “Jessica, this is a #firstworldproblem.”  On one hand I’m flattered, but on the other hand, I think this may be wrong.  Why don’t they and other vendors work with the blogger, the thought leader, and the influencer directly?   I also quickly realized that I’m not the first to encounter such a dilema.  A quick look at Chris Brogan’s Twitter stream  (@chrisbrogan) shows that advertisers currently sponsor his Twitter keyword stream, and apparently that’s okay.  Or is it not?

How Should I React & Should I Protect My Personal Brand on Twitter?

So I’m asking for your help, what do you think about all this?  Is it wrong for advertisers to sponsor keyword streams or use pay per click advertising tactics to drive conversations away from thought leaders, influencers, and individual personal brands?  Or should I be excited, flattered, and just continue on my way?  And should I connect with HireVue directly or should they engage me after they read this post?  I’m interested in hearing what you think so leave a comment or two or three below . . .

**Update as of 4/3/2012:  My Twitter stream is being dominated again by once again another vendor in the HR space.  @bountyjobs boasts 812 followers and has 188 tweets.  Until you invest in social media and join the conversation, using these Twitter promotional tools are a waste of time IMO.  I’ve also included a screenshot of the new hijacking on this post.  Also be sure to check out the comments section.  This has generated a lot of discussion.  In related news today,  I helped guest co-moderate a new Twitter chat called #peoplechat hosted by HR service provider, People Clues.  With my help we had 459 tweets and 9.3 million impressions.  Yes, almost 9.3 MILLION impressions.  Influence is so much more useful when you actually stop and join the conversation.