My Workplace Culture Is Not HR 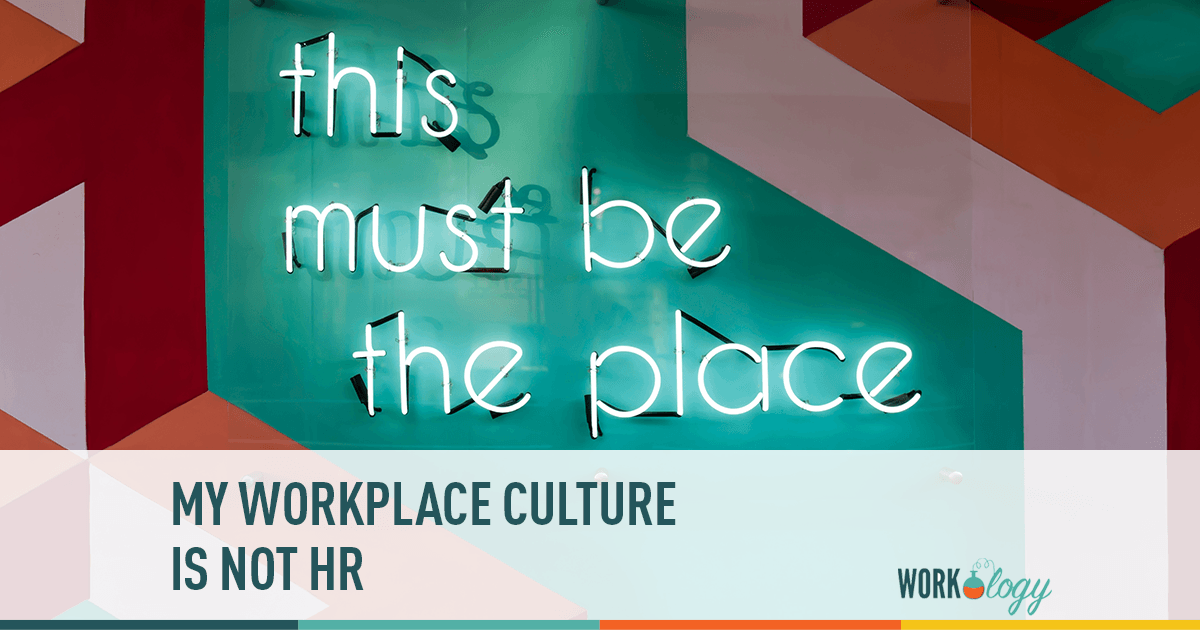 Several years ago, I was the corporate HR Director for a small, blue collar franchise with a big brand name. Within a few months of starting my new role, the President of the company slipped a postcard onto my desk from an organization called “Great Places to Work,” inviting us to solicit our employees feedback on just how great our place was (or wasn’t) to work.

I’d seen the name before. I’d seen other companies with plaques hanging in their office that they’d received this distinction, but it wasn’t something I’d ever participated in. However, upon researching and realizing what was involved in terms of digging into our workplace culture; as well as assessing the likelihood that it would be received appropriately and action taken, I took the postcard back to the President and told him we would not do the survey.

BTW, let’s just say I filed that under lessons learned moment in my career.

We did the survey.

I knew we didn’t have a great culture, and my M.O. in most cases would be to jump all over that survey so that I had the proof vs. just the anecdotal feedback to build a business case for change; but, in this case, I correctly surmised the feedback would not be received well; and that absolutely nothing would be done about it.

To say the feedback wasn’t received *well* would be putting it very mildly.We got a 50% response rate that was almost 100% negative.

Go ahead. Read that again. Our response rate was 100%. Negative.

I chose not to share the results with anyone until I could get my senior leaders in the same room for our first call with the GPTW consultant, who also was a licensed industrial psychologist. The workplace culture survey results were so bad that it didn’t take long for the President to unleash on the consultant for trying to make him believe he had a “shitty workplace” and demanded to know what she was trying to sell him. He wanted to know what more the employees could want because he built a fancy location and provided a gym (which, by the way, the employees had to pay for to use).

Even better, it culminated when the CFO insisted I must have administered the survey wrong because I gave them a few days to turn it in anonymously.

What the President neglected to tell me when he said they’d done surveys in the past and gotten good results, was that they’d locked all the employees into the main auditorium and made them fill out the surveys on the spot. And even my own VP told me that he didn’t dare put anything negative on it because of how it was administered.

And that was my first experience with Great Places To Work and their workplace culture survey process, y’all.

What is Great Places to Work?

Now, fast forward ten years and tons of conferences later, I had my first opportunity to attend a Great Places to Work event last week in Dallas, and it couldn’t have come at a better time. I’m currently consulting in the employer brand space but have also recently taken a new position to lead a new program for Randstad Sourceright as an Employment Brand Director. I admire so much of what GPTW stands for in terms of workplace culture and how it drives the employment brand experience, so it was great to get the opportunity to participate. And while I enjoyed how well the event was put together, the quality of the speakers and the topics –  I was struck by two things in particular:

Most people I spoke with were staff level professionals involved in project management teams or task force focused on a variety of things around company culture and, you guessed it, becoming a great place to work! Unfortunately, this concerns me that my profession of Human Resources is not doing a bang-up job of educating leadership for so many companies to not be familiar with Great Places To Work.

However, of the companies that are aware – they are aware. So much so, that they understand workplace culture is so pivotal to the company’s success; they are willing to invest in educating and arming their employees outside of HR in order to move the needle. And that is what it takes; understand that culture isn’t just another program or process that is HR driven, but that it must be cultivated and cared for not just from the top down, but across the organization and the entire employee body.