Creativity Is the Key to Saving Jobs From Robots & AI 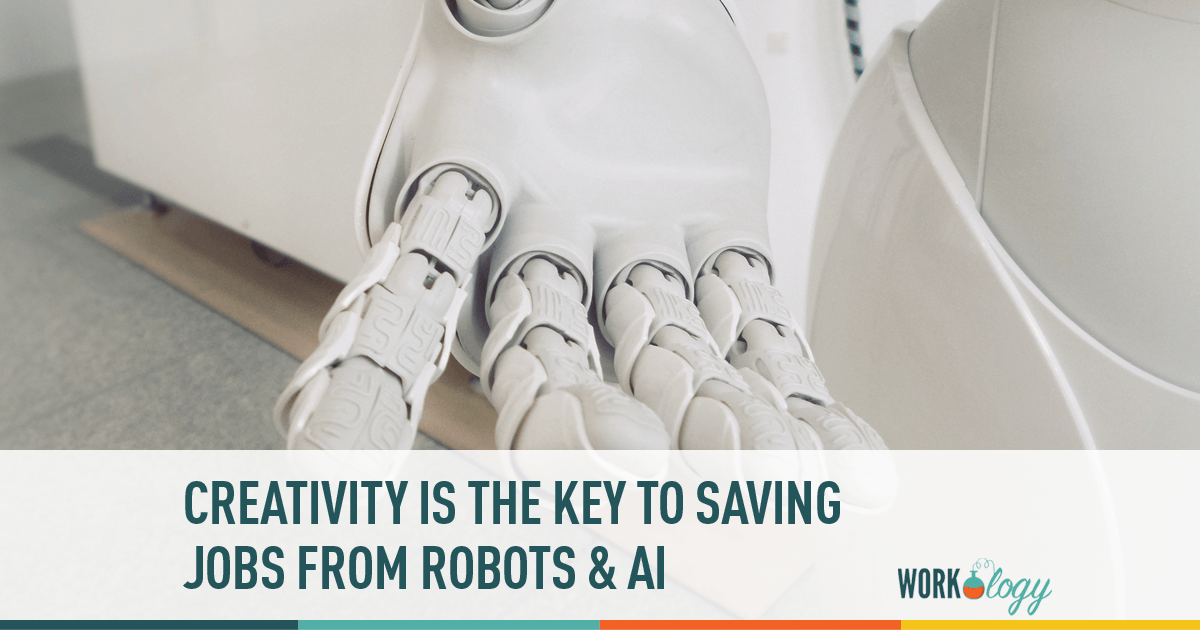 I and others have written a number of times about jobs being replaced by robots, or becoming “robotized”. My post Job Automation Versus Human Skills & Interaction and Sara Gallagher’s post “Pssst…Robots are After Your Job” for more information. A recent article in The Chronicle of Higher Education explores this subject as well and gives both a utopian and dystopian side of the argument.

The dystopian side is that robots are going to take all our jobs and will end up subjugating all of us, much like you see in the Terminator movies. Pretty grim stuff. None of us have jobs and we live in rat holes and scrabble for a meager sustenance.

The utopian side is that rather than the grim world described above technology makes our lives easier. The dull and the mundane tasks are performed by robots and artificial intelligence freeing us to pursue more creative and fulfilling pursuits.

I am for utopia

I am not a pessimist by nature. Although I find the dystopian movies interesting to watch I feel that our future in reality is going to be much more pleasant. Barring some international disaster or some asteroid striking earth I am in the school of thought that technology will be far more beneficial than it will be harmful.

Does this mean I don’t think people will be displaced by robots? Not at all! Present situations show that not to be true, people have lost their jobs to robots and this pace will do nothing but accelerate. Yet at the same time this also frees people and resources to create new technologies and new jobs, jobs that don’t yet exist. Technology does not invent technology. People invent technology. I was watching FutureScape, a show about current and future technology that described the invention of an artificial cell that beats like a heart cell. A person invented that not another machine.

Professor Richard Florida, in his article Robots Aren’t the Problem: It’s Us, says “Technology does not force us into a preordained path but enables us, or, more to the point, forces us to make choices about what we want our future to be like.” He feels that we are indeed in an age where technology is causing a major disruption but sees us also as being in a “creative period.” This period will require society to adapt to the disruption of technology by changing social structures that alter the nature of work.

Currently technology is causing a rift that has resulted in high paying technology jobs and low paying service jobs. Florida says it is time to tap into “workers’ intelligence and capabilities as a source of innovation and productivity improvements.” His research has found that two sets of skills increase pay and improve work. He said “Cognitive skills have to do with intelligence and knowledge; social skills involve the ability to mobilize resources, manage teams, and create value. These skills literally define high-wage knowledge work: When you add more of them to that work, wages go up. But here’s the thing: When those skills are added to service work, wages increase at a steeper rate than they do in creative jobs.”

He argues that technology, rather than being the road block, should be the catalyst for “creatifying” service jobs and taking advantage of employee skill sets as opposed to making jobs dull and routine.

The challenge to HR today, as I see it, is to review jobs and determine how with the use of technology we can make those jobs more meaningful and better paying. How can a service job be made to take advantage of someone’s creativity and their social skills rather than diminishing those skills? This will require HR professionals to be much more tech savvy than they currently are and to be more creative than they are used to being.

In the end this approach will have benefits not only to the employees and the company but to the HR pro as well because HR may be one of those service jobs that needs an overhaul.

What do you think the future will hold?