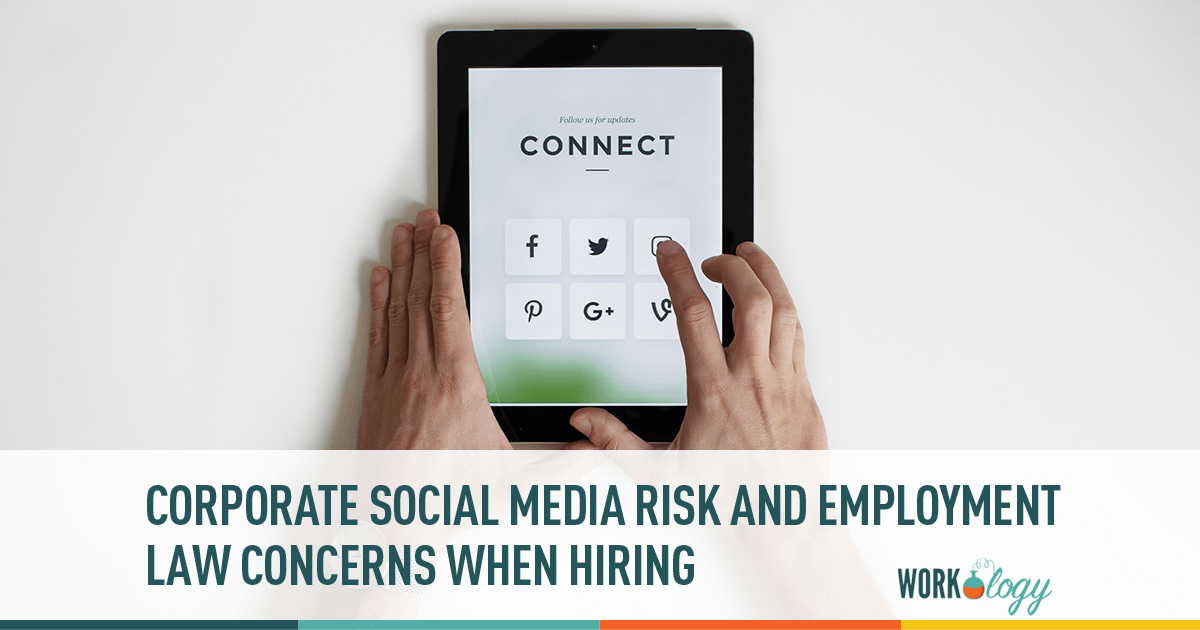 This post was originally published in HRO Today’s January/February publication under the title, Risky Business.  You can also view it online here.

Companies are using social media as part of their recruiting and candidate selection process and in business every day and with that grows the risk of using social media.  With more than 88 billion Google searches conducted monthly, chances are your HR team, recruiters, or managers are searching the interwebs as part of the recruiting and candidate sourcing process or as part of candidate vetting and background screening. You, or members of your team search Twitter, build lists, make friends, and fill positions.  Or maybe you use tools like Wink.com to search across social media networks by keyword.  Depending on how a candidate restricts and controls their privacy on sites like Facebook, a recruiter or manager can learn a great deal of information that shouldn’t be included in their decision to interview or even a hire a potential employee.

“That’s where the risk for potential social media discrimination sets in,” says employment law attorney and Partner at Kroman, Jackson, and Krantz, Jon Hyman.  “Recruiters and those involved in the hiring process often times have limited knowledge of compliance when it comes to the EEO or have received limited training in protected classes and their implications when used as part of the hiring and decision making process.”

Protected classes like Hyman mentioned are a foundation of employment law and should not be considered into the decision making process when a candidate is evaluated as part of the hiring process.  However, when vetting a possible employee though social media, the risk is that you can trip over the information quite easily. According to Title VII, the ADA, GINA, and ADEA, these protected classes can include: age, sex, religion, disability, genetic information, race/color, national origin, and pregnancy; information shared all the time and often public on social media networks.

When it comes to social media discrimination, it is not always black and white especially when it comes to current employment case law and precedent.  “There is no current case law or examples for employers to fall back in and there likely will not for the next two to three years,” says Hyman.”

Hyman provides us with the following scenario, “Imagine an employer views a candidate’s Facebook profile and sees they have recently ‘liked’ The Susan G. Komen Foundation Facebook Fan Page.  One might assume that the candidate suffers from cancer or is undergoing treatment and this protected information is factored although unintentionally into the hiring decision process.”

Hyman adds that “Once that bell is rung, it’s hard to be undone especially if the company did not have an active social media presence.”

Many employment law attorneys advise organizations to avoid using social networking and the internet as part of the hiring and recruitment process altogether. This would remove the potential risk that social media might bring.  On the surface, this seems like a safe bet , but according to a recently released Jobvite study in 2011 36.6 million U.S. job seekers used social media as part of their job search strategy.  That means many companies are either ignoring their employment law attorney’s recommendation to avoid social media and all its potential risks or missing that recommendation all together.  In either case, engage active job seekers with social media networks could potentially cost corporate America millions of dollars.

Facebook, not LinkedIn, which is the largest social network in the world at 800 billion users is forcing companies to take stock of this new social media discrimination landscape. Twenty-two point two million U.S. job seekers found work using Facebook in 2011.  Sheer numbers alone are forcing companies to address the growing move towards mixing business and personal in the social media arena.  This personal and professionals mesh presents an often uncomfortable landmine for companies to navigate in.  Compared to the professional social network, LinkedIn, which removes much of the risk for social media discrimination as a member profiles  are expected to include a job application or resume.  But LinkedIn is not the social network of choice as Americans are spending on average nearly 16 hours a month posting, friending, and gaming on Facebook and 7 out of 10 employees have friended their boss or co-worker, so HR has followed them there.

As the new social order comes upon us and infiltrates corporate cubicles, virtual offices, and mobile devices, corporate America must heed the both the rewards and risks of social media and make HR act accordingly.

This post is a 2 part blog series on Risk and Corporate Social Media.  Look for it coming soon. . .