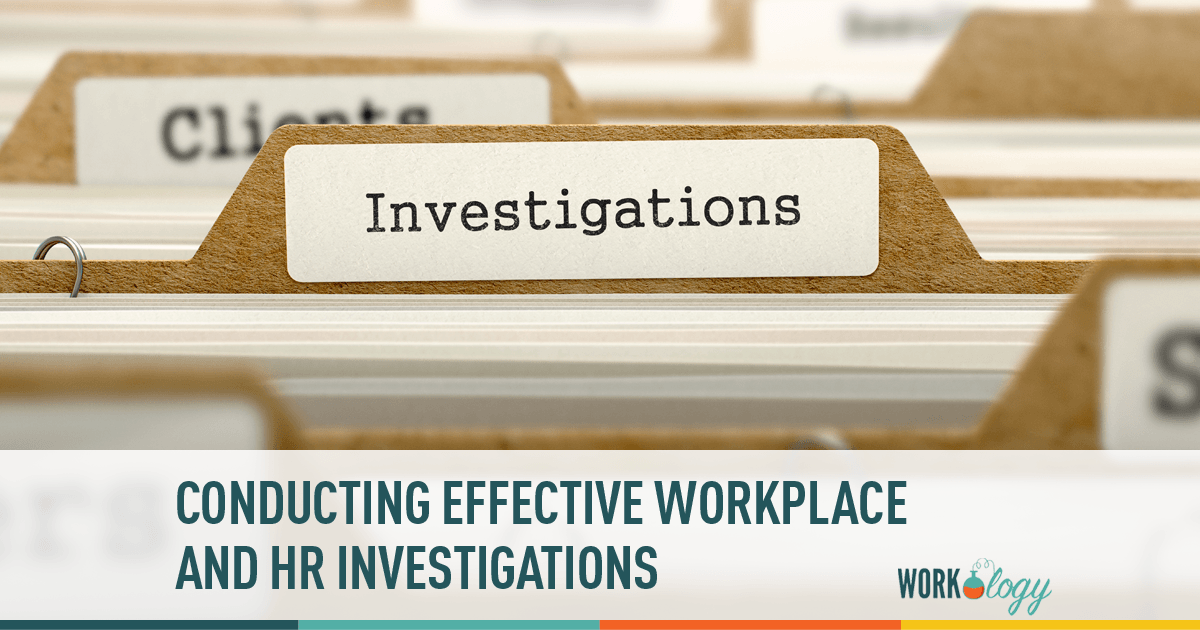 Early in my HR career, an employee came to me saying that her supervisor had cornered her in a hallway and demanded a kiss. Most of the harassment complaints I have dealt with involve situations where joking gets out of hand or employees are making inappropriate comments and gestures. If this employee’s complaint was true, I knew we had a much more serious situation — one that could result in termination of the supervisor. In this post, we’ll look at how to conduct a thorough workplace investigation by looking at this example.

The challenging thing with any complaint like this is that there’s often not much evidence beyond the stories of the complainant and the accused. As HR professionals conducting workplace investigations, we have to sort through the two stories, determine the most likely chain of events, and take action accordingly.

Obtaining the truth is the hardest aspect of workplace investigations. Rarely is there a smoking gun and often there are conflicting versions of events. That is why it is important to conduct a thorough investigation to come to an accurate conclusion.

I knew it was going to be hard to prove what happened because there were no witnesses. It could come down to the story of the employee and the story of the supervisor. This is why it is a good idea to have two people conducting interviews in challenging investigations; it gives you two perspectives.

There are security cameras in the main part of the warehouse, but not in the hallway. If we could review the camera footage, we might be able to see the note being passed as well as the supervisor and employee walking toward the two separate doors that led to the hallway. I asked the employee what time the incident happened, and I also asked her where she put the note. She said she threw it in the trash by her packing station before heading back to the hallway. The important thing is that we kept asking questions to elicit details. We didn’t know what minute details might lead us to concrete information to back up the employee’s story.

The next step would normally be interviewing witnesses, but we didn’t have any in this case. So we skipped ahead to reviewing security camera footage, which showed some kind of exchange between the two at the employee’s packing station before each took a separate route to the hallway. Both emerged from separate doors a few minutes later. The things we saw confirmed parts of the employee’s story. Unfortunately the angle of the camera made it unclear if a note was passed from the supervisor to the employee. We needed the note. So my coworker and I put on gloves and began to sift through trash. We found the note in the supervisor’s writing, and we were also able to find a notepad on the supervisor’s desk that was of the same paper as the note.

We confronted the accused with the basics of the story the employee gave us. He denied it. We then showed him the note. He denied that he wrote it. When we asked why the security camera footage showed him going to the hallway, he said he was going to the bathroom. We asked him if there was any reason the employee would fabricate this story, and he said he couldn’t think of anything. We ended up suspending the supervisor, pending further investigation.

With the accused supervisor suspended, we pored over our notes from the interviews we had done. Without a confession from the supervisor, we wanted to make sure we were making the right decision about termination. We again reviewed the security camera footage and looked at the note. Even though there was nothing to support or deny the employee’s account of what happened during the brief moments in the hallway, we decided that because the evidence we had confirmed the employee’s version of what happened before and after the hallway incident, this was enough to end the supervisor’s employment.

We were fortunate to have the camera footage as well as the note in this case, but often you reach this stage in the investigation and have little more than the information gathered from interviews with the complainant, accused and witnesses. Even if that’s the case, you still need to come to a conclusion and take appropriate action. Look at all your notes from the interviews. Put together a timeline of events and try to find the holes in people’s stories. Get someone else in your HR department to review all the information. A fresh set of eyes can uncover things you may have missed. This is also an advantage of having a second HR person involved in the interviews.

After you have taken the appropriate action with the accused, follow up with the person who initially made the complaint to let them know the outcome. You don’t have to share confidential information, but give them enough to feel some closure. Make sure that person has the resources and support they need to return to work. If the incident they experienced was serious enough, you may want to provide them with information on counseling services.

Workplace investigations are the time in HR where we have to play the part of a detective. This means interviewing people, asking the right questions, figuring out if there were any witnesses and sometimes digging through the trash. It’s important to explore all the possibilities because often someone’s job is on the line, and the well being of the victim and other employees is at stake.